Well, I don’t know about your lunch yesterday, but ours was — quite simply — a feast. And it was just as much a feast for the eyes as the taste buds.

We were lunching at Le Vieux Logis, a charming old hotel that’s part of the Relais & Châteaux group, located in the (charming old) village of Trémolat, about a 50-minute drive northwest of Daglan.

My wife Jan and I have eaten many times at Le Bistro d’en Face, which is part of the hotel but located across the village’s main street. (It’s worth driving from Daglan to the bistro for their French fries alone — big, chunky, crispy fries that are cooked in duck fat.) But we had never eaten in the hotel’s main, gourmet restaurant — which has earned a Michelin star.

Lunching with us were friends Janice and Bill, who know the restaurant — and its talented staff, including the head chef — very well. Understanding how much we enjoy fine dining, they had suggested the outing, and were happy to introduce us to one of their favourite restaurants in the Greater Daglan Area.

Yesterday’s feast began with a warm welcome as we entered the hotel,  by the charming hostess, Estelle. Once seated at our table, we began with kirs and then a few lovely amuse-bouches, including hard-boiled quail eggs that were wrapped in smoked duck breast. (Sure sign of a top-flight restaurant: Our server immediately understood when Jan explained that she is allergic to gluten, and made all the appropriate substitutions in every course, including serving gluten-free bread that Jan said was delicious.)

Daytime meals at Le Vieux Logis are described as “tapas” lunches, but they are nothing like the traditional Spanish dishes known for olive oil, peppers, onions and cured meats. Instead, Chef promises you three starters, two main courses, a cheese course, and three desserts — each dish worthy of a Michelin-starred restaurant, as you’ll soon see. Along the way, we enjoyed both white and red wines chosen by Janice, who is impressively knowledgeable about wines in general and regional wines in particular.

And so, we begin. First of the entrées was this beautiful plate featuring a base of herring-flavoured mousse, tiny balls of potato, and delicate curls of herring:

A delicate plate with herring curls.

Next came a bowl of crème brûlée — made with foie gras. Delicate, not too sweet, with lots of foie gras flavour. Or, as Jan put it, “Fantastic!” Here it is:

A great meal in the Périgord Noir wouldn’t be complete without some of our area’s famous black truffles, of course — and here is how Chef put them to good use. It’s a creamy dish of a single lightly poached egg topped with slices of truffle, seated on a base of chopped black truffle, served with lightly grilled bread sticks that were flecked with (guess what?) more truffle. Here’s my serving:

Next came a foie gras dish — which was either a fourth entrée or the first of three main courses, and I’m not sure which — that combined the traditional with the new. It was composed of sautéed foie gras slices, served with small chunks of pomelo (the citrus fruit) and bitter endive with a light sauce. Here it is:

As a fish course, Chef made this delicate filet of trout (trout from the various rivers of the Dordogne département are justly famous), served with gnocchi and mushrooms: 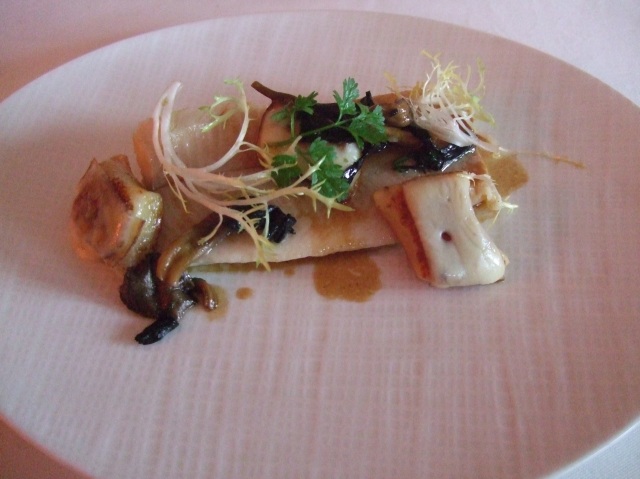 Our final plat principal included one of my favourite meats — sweetbreads, which were served on a vegetable purée with small sticks of green apple. (I gave this dish a 9.5 out of 10, deciding to reserve the full 10 points for the sweetbreads served at Le Grand Bleu in Sarlat, the Michelin-starred restaurant I’ve reviewed many times.) Here it is:

We were now approaching the finish line — time for a cheese course. And this scoop of whipped Roquefort was perfect:

Three desserts were promised, and three were delivered.  First came a cylinder of poached pear, topped with a quenelle of orange sherbet, surrounded by a ring of yoghurt mousse on which cookie crumbs had been sprinkled. (With beautiful attention to detail, there were no cookie crumbs on Jan’s mousse, since of course they contain gluten from the wheat flour.) Here is Dessert No. 1: 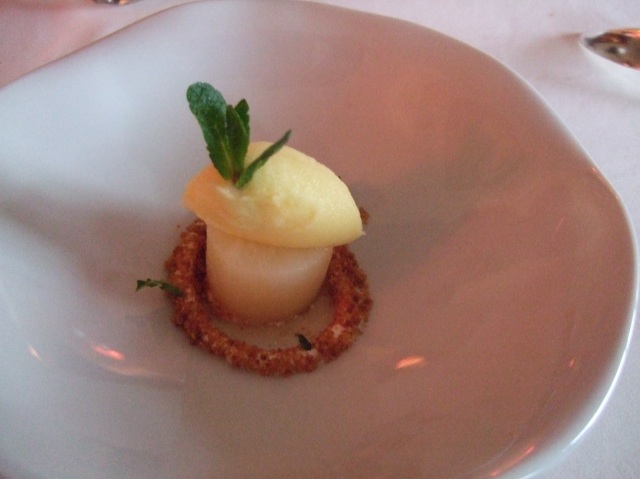 A bit of poached pear. Not to mention orange sherbet.

Finally, here are Desserts 2 and 3: A chocolate-based confection on the left, and a small cup of a fruit-based dessert with whipped cream on top, served with a tarragon macaron. 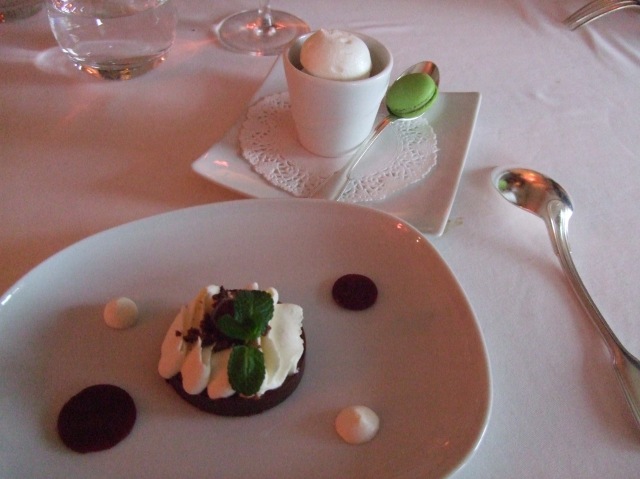 Chocolate to the left of me, a  foam-topped cup to the right. Stuck in the middle is moi.

Amazingly, we managed to push away from the table after the feast (which was completed by coffees for Jan and me) and were led by Janice and Bill back into the restaurant’s huge kitchen. There we had the pleasure of meeting Chef Vincent Arnould, who in 2007 won the uniquely-French title of Meilleur Ouvrier de France and received the honour in Paris, presented by then-President Sarkozy. His chef’s whites bear the M.O.F. insignia on his collar.

By this point in the afternoon, the meal service was over, and we were the last guests remaining. Before we left, we spent some time with Chef watching his team practice the technique of blowing melted sugar into balls (about the size of Christmas tree ornaments), ready to be filled with desserts. At a great restaurant, practice makes perfect.