Several weeks before our recent trip to Paris, I had a sudden brainwave: Since daughter Anne loves cakes and pastries so much, why don’t we all take a baking class while we’re in the capital of pâtisserie? (I’ll admit that this lightning bolt struck me while my wife Jan and I were watching the BBC’s “Great British Bake Off.”)

As it happened, it took just a few minutes of searching on Google to find the right course at the right place: “Macaron Daze” at La Cuisine Paris, overlooking the Seine at 80 Quai de l’Hôtel de Ville. “Macaron Daze” is a two-hour course on how to make macarons — those light and delicious (and gluten-free)  cookie sandwiches — and it cost 65 euros per person. So I signed us up.

Jan, Anne and I arrived at the appointed spot a bit early last Wednesday, having had an excellent lunch at Le Bistro du Septième, and then a quick taxi ride. We were greeted warmly, and eventually shown downstairs where the class would take place, starting promptly at 2:30. As it turned out, there were 10 of us — our instructor, a lively young chef from Brittany (who speaks perfect English), plus nine students: Jan, Anne and I; then another young woman from Toronto; a mother and daughter from Australia; a young woman from Bali; and two young chaps from Norway. (Okay, is that international or what?)

What follows is a photographic look at our class. In this posting, my goal isn’t to provide the “recipe” for macarons, or even all the steps. Rather, it’s to show you what a cooking class like this involves.

If you’re headed to Paris, and you like to cook, and you want to try a baking or cooking course in English, then I’d say that La Cuisine Paris is for you. They do much more than baking, as their courses run the gamut from pastries to dinners to soufflés to market shopping, and more.  Now let’s begin.

Our class was destined to work with two fillings — a milk chocolate/praline mixture, and a dark chocolate/coffee mixture. Our instructor divided the nine students into groups of three, so the team of Jan, Anne and me first tackled the chocolate/praline filling, starting by melting the chocolate and then beating it into the ground praline mixture. Here are Jan and Anne at work (with the other Toronto woman and one of the Norwegians at the rear of the photo): 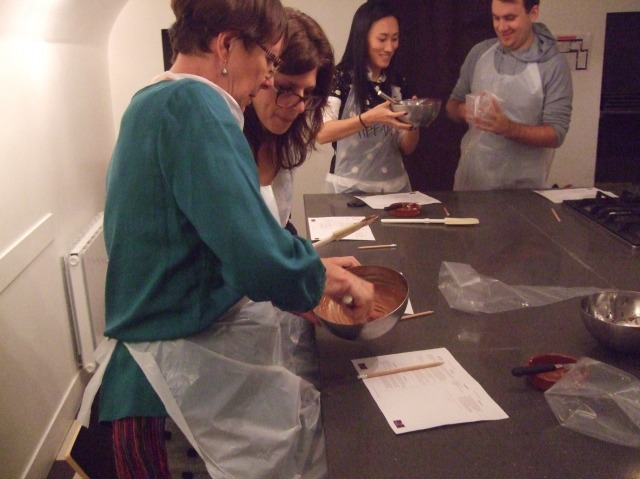 Melted milk chocolate and a praline mixture make up one of the fillings.

It turns out that you can make macarons with either French meringue or Italian (who knew? — okay, Anne did), and our instructor recommended the Italian method as being more stable. For this meringue, the sugar is melted, and then poured gently onto the egg whites as they’re beaten.

In this photo, our instructor is explaining things, while Jan beats the egg whites and Anne pours on the melted sugar:

When is the meringue ready to go? Our instructor shows how the egg whites should be solid enough to hold their shape, but still a bit soft:

Our instructor shows how the meringue should look.

Now it’s our turn. And yes! Our mixture seems to be perfect: 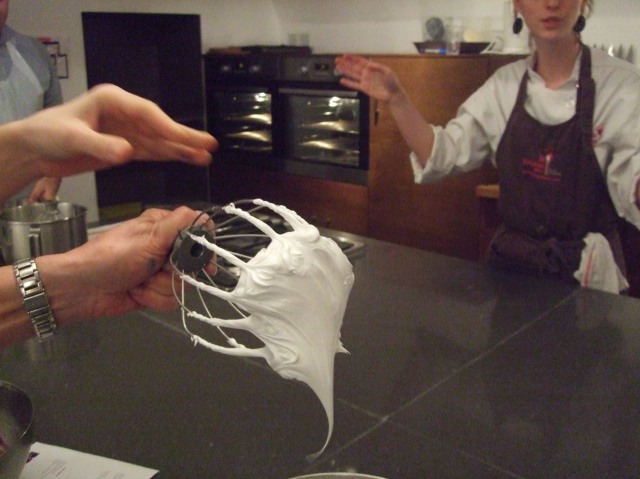 The verdict on our meringue: Perfect. 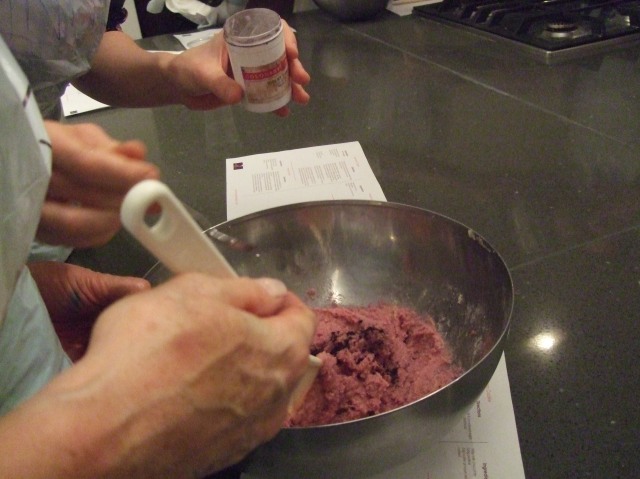 Adding colour to our meringue, bit by bit.

And then it’s time for power: So Dad (yes, it’s me) beats the stiff egg whites and ground almonds with the colouring agent, while daughter Anne adds smile support: 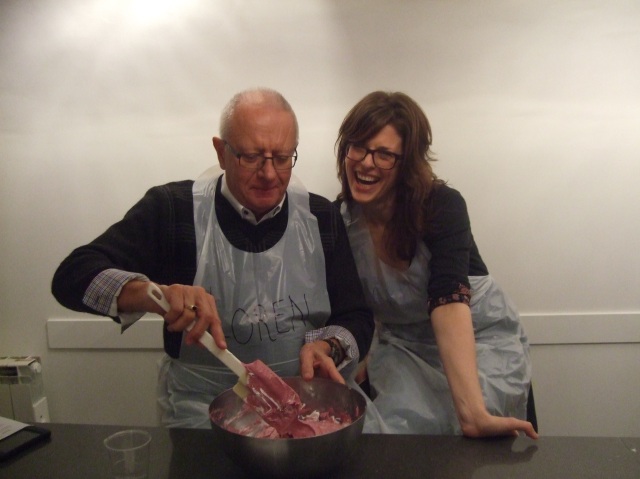 Father and daughter team: The folding of the coloured meringue mix.

Meanwhile, the two different filling mixtures (milk chocolate/praline and dark chocolate/coffee) have been plopped into piping bags and put into the refrigerator to cool down. Then the meringue mixtures have also been placed into piping bags, and squeezed out onto baking trays in various shapes, like these:

After baking and cooling, the cookies are ready to be filled. This simply involves squeezing some of the filling mixture onto one cookie, and then placing another cookie on top. Here’s our instructor, showing the right technique: 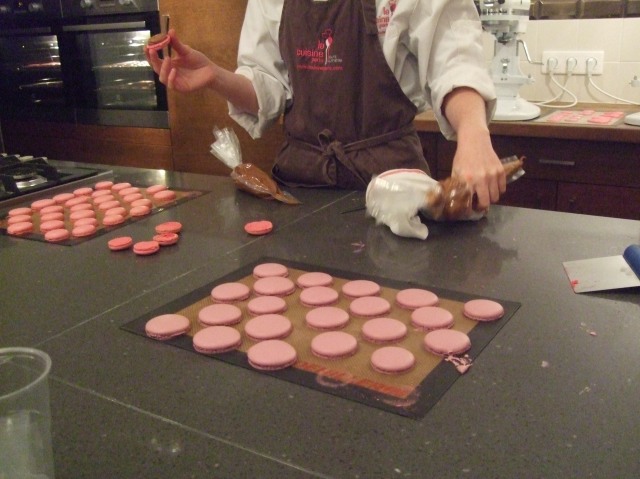 Our instructor shows how to pipe the filling onto the bottom cookie.

Meanwhile, various trays of baked cookies are cooling, while other trays are still in the ovens (see the left rear of the photo). As you can imagine, nine students at work can create an awful lot of macarons. Here is our cheerful instructor, showing off a finished cookie:

Showing off a completed macaron.

And then, just after 4:30 in the afternoon, we were done — and were each given a box of the macarons we had made, plus written directions, plus some tips on where to shop in Paris for kitchen equipment and baking supplies. In this photo, our chef is handing out our bags of goodies, and having a final word with each student:

No one goes away empty-handed.

By that point in our week, Jan, Anne and I had only another two nights in Paris — and 90 macarons seemed a bit over the top. So we left one box for the staff at La Cuisine Paris to enjoy, and on Friday morning we gave a box to the owner of the apartment we had rented. As for the remaining 30 or so cookies, well, they did manage to disappear. You’re not really surprised, are you.

5 Responses to Macaron Daze in Paris