In today’s posting, we visit the medina of Marrakech — the city’s ancient quarter — and enter the souk or market via the Jamaa el Fna, a huge square in the heart of the city.

In the interests of accuracy, my wife Jan and I actually made the trip to the souk on the morning of Monday, February 23, at the start of our one-week vacation in Morocco. To get there, we took the free bus that was provided by our resort, the Club Med Marrakech La Palmeraie.

As I wrote in yesterday’s posting, I was  enchanted with Morocco, as Jan was during her vacation there some 30 years ago. She particularly wanted me to see the Jamaa el Fna, a famous square whose name seems to have many spellings and many meanings, including “assembly of the dead,” named for the public executions that took place there.

I’ll confess I was a bit apprehensive about the venture, recalling the terrible explosion that took place on April 28, 2011 at a café on the edge of the square, killing 17 people. Just how tense would the place feel?

As it turned out, it was a pretty easy-going and enjoyable trip. As we clambered out of our bus, a man latched onto us and made it clear that he very much wanted to be our guide. After saying no quite a few times, we finally said yes; the price seemed reasonable for his morning’s work, and he was not only friendly but also spoke good English.

As we crossed the huge square, which seemed fairly bare, he explained that mornings tend to be quieter; the activity picks up as the day rolls along. So for us, there was not a lot to see in the square, except for a few snake charmers, some monkeys on leashes, and women who could decorate your hands with henna.

Here is our guide chatting with Jan, as we stopped for a coffee and some water on the edge of the square.

We’ve stopped for coffee, water, and a chat with our guide.

After the coffee break, we finished our walk across the square, passing these stalls selling oranges and orange juice: 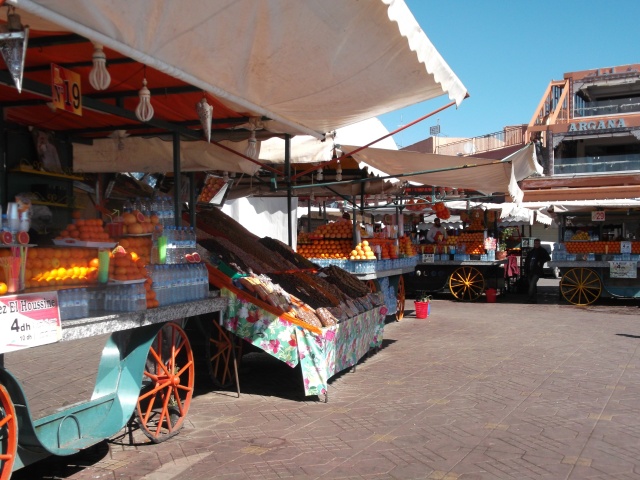 Orange juice was for sale at several stalls around the square.

And then it was down this wide street, and into the souk itself:

Our guide walks with Jan across the square and towards the souk.

What we found was a maze of inter-connecting small streets and alleyways, lined with stalls selling just about anything — jewellery, fresh meat, statues, clothing, shoes, lamps, and much more. The streets are narrow and cobbled, so the walking isn’t all that easy. Carts pulled by donkeys, or pushed by men, as well as bicycles and motor scooters, managed to thread their way among the shoppers. Here’s just one of many carts: 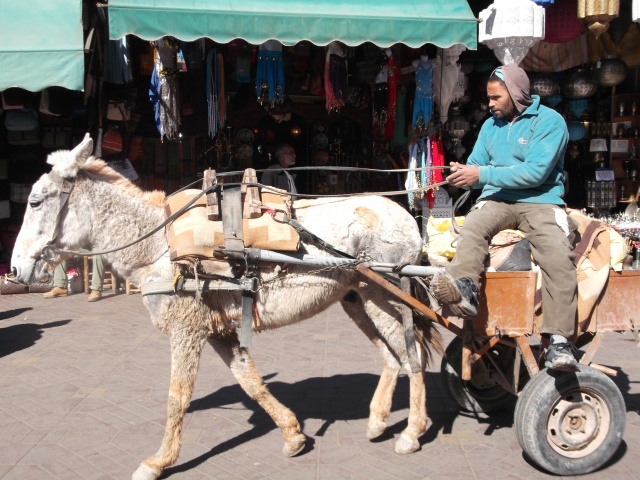 Carts like this were common sights in the market area.

The next photo shows one of the loveliest and quietest streets we saw, but it gives you some idea of the market area: 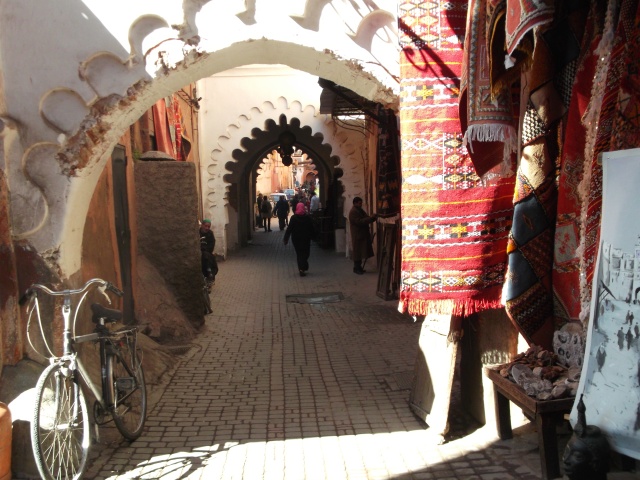 One of the quieter streets in the souk.

As it turned out, our guide had a specific destination in mind — a government-run store that sells a wide variety of herbs and spices and of course the ever-present Moroccan wonder-drug and all-purpose cooking-and-flavouring oil, argan oil. (That’s the oil that comes from a type of nut that goats seem to love, as I showed in yesterday’s posting.)

After a brief tour of the store, and a demonstration of argan oil extraction, we were led into this room where the store’s manager explained (in quite good English) the uses of virtually every herb, spice and oil mixture in the store: 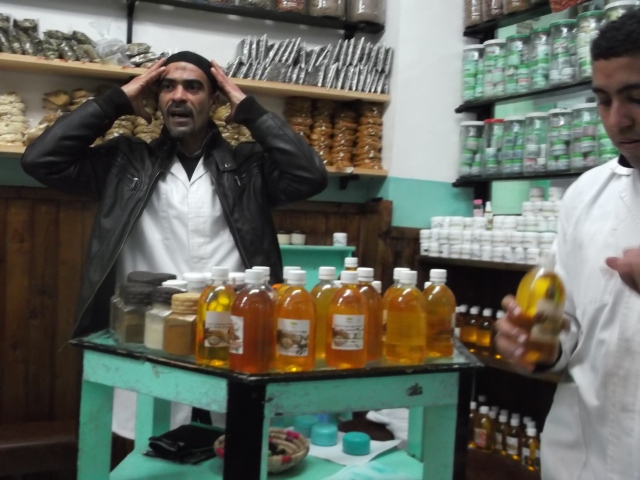 We get a demonstration of how to rub oil on your temples.

In this next photo, he’s ticking off the benefits of argan oil. Eventually he finished his pitch, we bought a few items (including some saffron and one of the argan oil mixtures), and headed back out to the main square. After a rest and another coffee, we walked back to the waiting bus — thinking ahead to a big fat lunch. 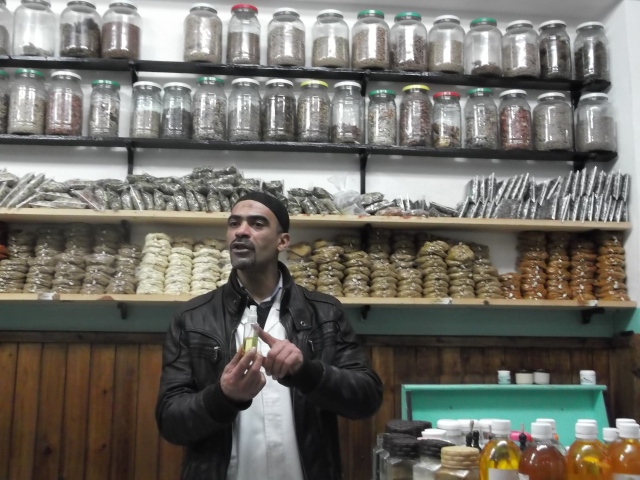 Ticking off some of the benefits of the natural argan oil.

And speaking of big fat lunches, in my next posting, I’ll offer a comprehensive review of our experience at the Club Med resort. You just might be surprised at how much weight a person can gain in a week.