We are now settled at home in Daglan, where the sun is shining, where I just finished some chores in shirtsleeves (no jacket required), and where spring is in the air. But in today’s posting I’ll take a final look back at our Moroccan vacation, in the last week of February. The topic? The resort where we stayed.

A few introductory comments. Why am I writing about a commercial enterprise — is this an ad? Absolutely not. Radio Free Daglan doesn’t accept advertising; I write about things that interest me. And I was particularly interested in Club Med, because for all that I’ve read and heard about the resort chain over the years, my wife Jan and I had never visited one of its properties. Finally, I’ve written this posting somewhat differently: You’ll find short bits of text at first, interspersed with lots of photos; then near the end of the posting, I have more detailed comments, just in case you’re still interested. And awake.

So with no further build-up, here’s the sign that greeted us as we arrived from the airport at the Club Med Marrakech La Palmeraie: 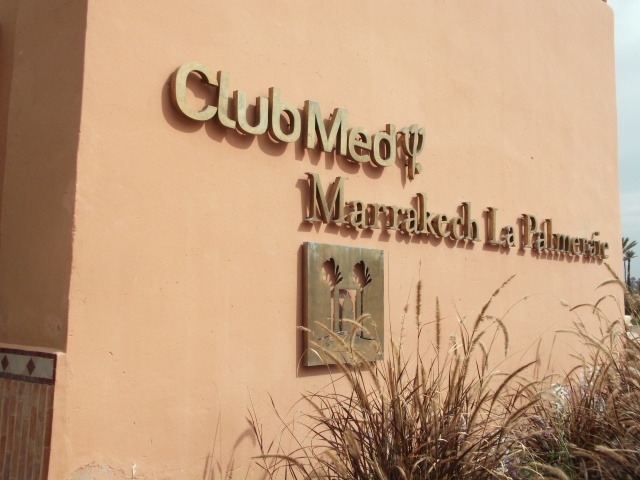 At the entrance to the resort grounds.

Having made our way through security at the front gate, we travelled along a well-landscaped road to reach the entrance:

We pass through a gate and head towards the resort.

As we climbed out of our van, we were greeted by Club Med staff and a group of men playing Moroccan music, and looking like this:

Moroccan music greets us at the entrance.

The grounds are absolutely immense, since they encompass, among other things, a gigantic swimming pool (unheated: never got in it); a golf course; a putting green; bocce courts; tennis courts; a nightclub and an adjoining theatre; a gym; a spa; and lots of wide-open spaces like this terrace: 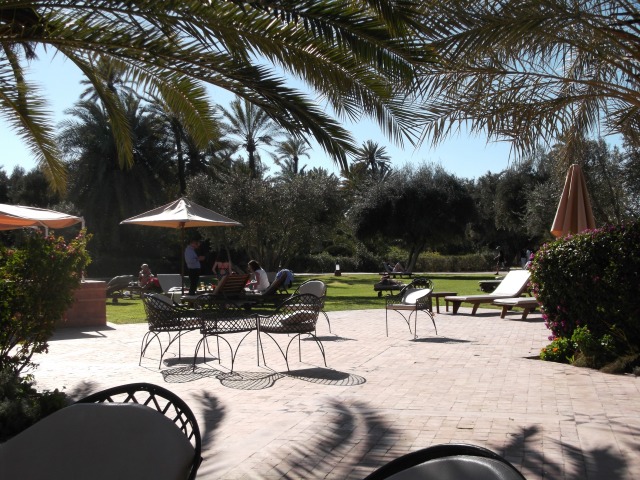 Part of the huge terrace adjoining the main pool.

Here’s a look at just one part of the main pool: 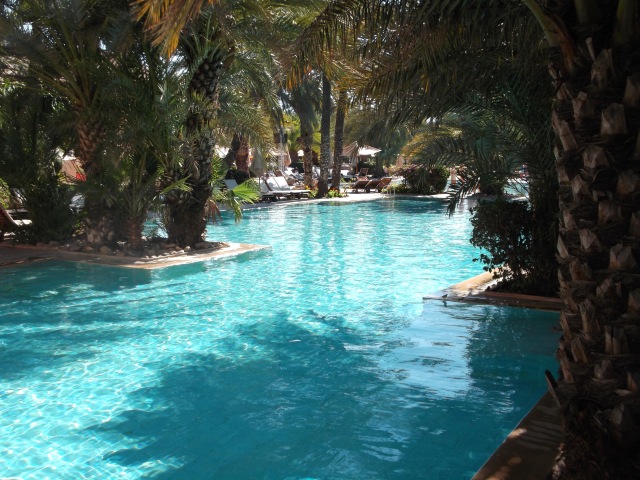 A quiet corner of the resort’s main swimming pool.

And here’s a view over the resort grounds, as seen from a tall tower on the property. If I’ve got my bearings right, we’re looking towards Marrakesh itself, with foothills of the Atlas Mountains in the distance: 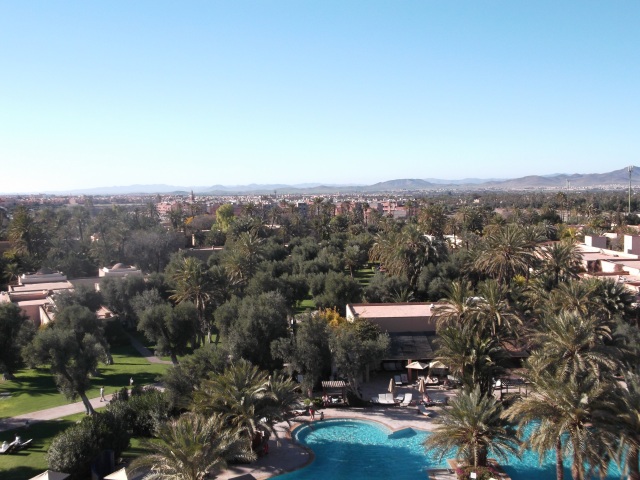 A view from a tower on the grounds.

Our room was reasonably spacious and well-appointed, and the mattress was nice and firm. The daily towel art that our maid provided was just a bonus:

The biggest surprise for me was just how family-oriented this Club Med was. In my mind, the chain still had a sort of “Swinging Sixties” reputation, but in fact it seems to have evolved dramatically, and now puts a high priority on families — and especially on keeping kids entertained. Just one of countless entertainments for the kids was this pair of snake charmers: 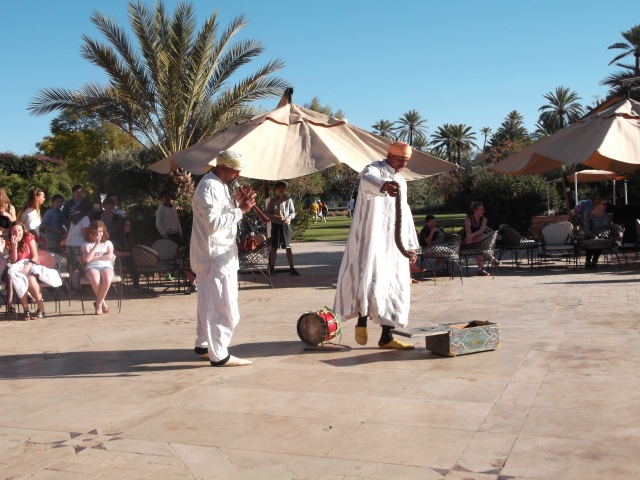 In this photo, the back-up man keeps beating his drum, while the lead charmer gets up close and personal with his cobra — as the kids sit mesmerized: 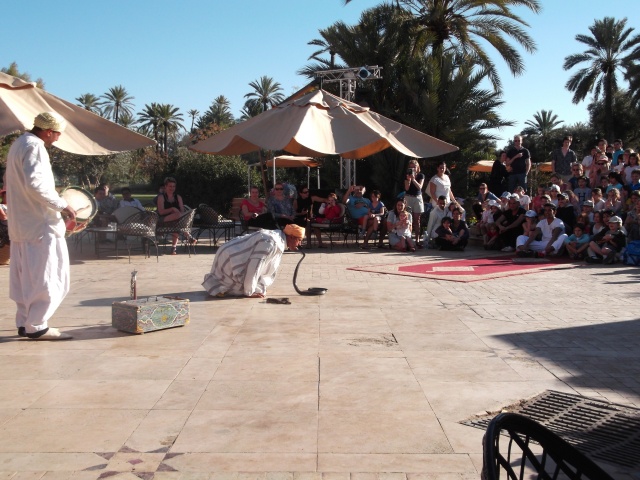 The lead charmer plays kissy-face with a cobra.

One morning, the Club Med staff took the younger kids off on an excursion on the grounds, painted their faces, and then led a parade back onto the main terrace, where their parents welcomed them before lunch:

Parents re-join their kids at the end of a parade through the grounds.

Horseback riding was a popular activity, and so was riding camels, like this:

And what about food and wine, I can almost hear you asking. Well, there was an awful lot of it, and it was generally excellent, although having every meal as a buffet can be a bit disappointing, especially as the dishes were closer to lukewarm than hot. (Actually, the meals in the main restaurant were all buffet-style; there is another restaurant on the grounds that does provide a menu, but we didn’t find the food as appetizing there as in the main restaurant.)

My favourite meal on the grounds was an outdoor lunch that was beautifully set up. We walked to our table on carpets, past a sort of honour guard of camels and horses, and then chose from a great variety of Moroccan foods, much of it freshly cooked on grills. There was live music, some communal singing, and a friendly atmosphere. Here’s how it looked:

A beautiful Moroccan meal in the sunshine.

The variety and abundance of foods at every meal were amazing. Unlike the meals at other all-inclusive resorts we’ve visited, the meals at this Club Med didn’t suffer from the “sameness” problem — on a given night, dinner might include several kinds of pasta, a huge variety of salads, several fish and seafood dishes, a number of meats, and much more. Like Beef Wellington, for example: 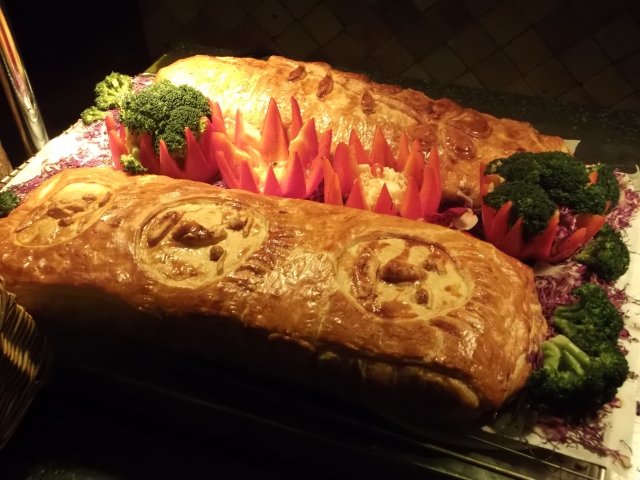 For me, breakfast was a real highlight. At home, it’s usually some Greek yoghurt and a bran cereal, but when I’m travelling, I love a big, hot breakfast. Every day at the resort, one of the countless breakfast offerings was an egg dish made by a very quick chef, who made omelettes as well as simple fried eggs:

The egg chef was on hand for every breakfast.

But the killer for me was the huge assortment of pastries — certainly as good as, and possibly better than, any I’ve ever eaten for breakfast at a hotel in Paris, and with much more variety. Personally, I hold the pastry chefs mostly responsible for the weight I gained in our week (more on that later). Have a look:

My favourites — and my downfall.

Vacationers don’t live for food alone, of course, and Club Med resorts are known for some pretty professional entertainment each evening, with shows like this:

One of the shows, held each night in the resort’s theatre.

Several of the shows featured acrobats, tossing each other around the stage, or circling out over the audience:

An acrobat swings over the audience at the resort’s theatre.

So that should give you a pretty thorough view of what our resort was like. But if you’re interested, here are some summary thoughts:

The accommodation. We were happy enough with our room, although it did lack some of the extras that seem to be expected at luxury hotels — little bottles of body lotion, fluffy bathrobes, and so on. On the plus side, it had a large walk-in shower (not the tricky and sometimes terrifying shower-bath combinations found in so many French hotels), was kept very clean, and was supplied with fresh bottled water each day.

The weather. Mornings and evenings were surprisingly cool, and I wound up buying a zip-up  sweatshirt and a scarf to keep warm. But the afternoons were sunny and pleasant. I’m thinking that March or April might be better for a visit, if you’re after sun and swimming.

The food. For quantity, variety, and quality, the food at this Club Med was the best of any of the buffets we’ve had at various resorts and hotels. But we were happier at La Source in Grenada a few years ago, where breakfasts and lunches were buffets, but dinners were served à la carte. Jan in particular was unhappy that so many of the foods at the Club Med main restaurant were cool to lukewarm by the time we walked our plates back to our table.

The drinks. No complaints about the wine and other drinks. They were freely available, and generally quite good. We never felt compelled to pay extra for any of the “premium” wines, because the Moroccan rosé (actually a gris) was tasty and refreshing.  If you wanted to stretch out your dinner or lunch with another glass or two, or even another bottle, there was never a fuss. Bar service was usually quick and professional.

The activities. As you can imagine, no complaints here. We took part in the aquagym exercises one morning in the “tranquil” pool (adults-only, heated) but on other mornings we were either away from the resort or found the air simply too cool for comfort. We used the well-equipped gym quite a lot, and I had a good back massage at the spa one morning. As for other sports and activities, there are tons.

The guests. I’d say the clientele was reasonably upscale, but not over-the-top wealthy. The biggest surprise was how family-oriented the resort was, and frankly that was a bit of a bother. We didn’t mind the little kids around us — generally, they were quite cute and well-behaved, and we enjoyed watching some of their activities. But the pre-teens and teens were sometimes just too much, running through the bar, jumping off stairs, pushing one another, and so on.

The bottom line. Were we glad we went? Yes, for sure. Would we go again? No — the once was enough.  (On another trip to Morocco, we’d probably stay in another area, and possibly not in an all-inclusive resort.) Would we recommend this Club Med? Absolutely, if you have kids up to the age of 15 or 16 (after that age, teens find just about everything boring, especially if their parents are nearby).

And finally, what about that weight gain I’ve mentioned? Well, in the one week we were away, I packed on 2.4 kilos, or more than five pounds. Again, I blame the pastry chefs, plus the fact that we tended to eat big dinners (which we don’t, while at home). Having returned to Daglan, I’ve already lost about half that weight-gain, and I’m staying as far away from the bakery in Castelnaud as I can.