Our newest (and tiniest) neighbour

We have a newcomer in central Daglan,who now lives right next door to our house. This new neighbour is quite cute, quite active, and so tiny that we still don’t know its gender. So I’ll just refer to it as Kitty.

Yes, it’s a kitten, and it seems to have had a somewhat challenging — and certainly early — entry into the world of humans. Kitty’s story begins when a woman in Daglan who lives near the Salle des fêtes or community hall heard a squeaking sound coming from the roof of the nearby tourist office. Upon investigation, the source of the squeaking turned out to be a tiny kitten, stuck on the roof. Kitty was then retrieved by a friendly man with a ladder.

After asking a few villagers if they would adopt Kitty, the woman asked her friend RoseMarie (our next door neighbour) if she would like the kitten, and RoseMarie gladly agreed. But as you can see in the photo below, taken a few weeks ago, Kitty really was a miniature. 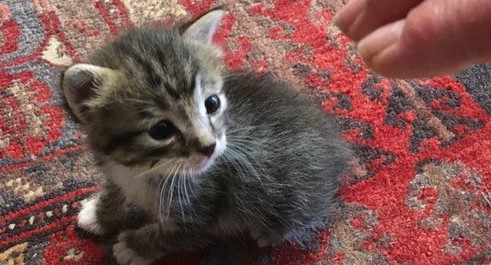 On the carpet in its new home.

So, what do you feed a kitten so little and so young? Well, it turns out there is a special milk for very young cats, which can be fed by bottle. The starting point was a plastic bottle of nose spray that I offered, which RoseMarie opened up (by cutting off the bottom) and then washed carefully. Later, she was able to find a tiny bottle for nursing Kitty, and here’s the little one having a drink:

Now a few weeks have gone by, Kitty is getting bigger (especially its ears!), and although the kitten still likes the bottle, it is also getting used to lapping up the special milk from a bowl, and nibbling on crunchies for kittens. Here’s Kitty as of yesterday, sitting on the lap of my wife Jan, who was visiting: 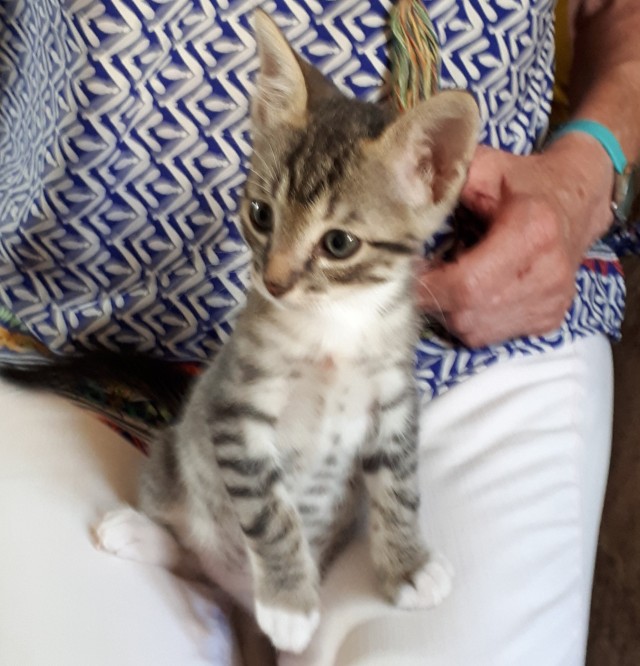 Just resting, and looking around.

Kitty is an active kitten, racing around RoseMarie’s house, hiding under furniture, wrestling with strings and ribbons, and nipping at the arms of anyone who holds it. Kitty particularly likes a ball of fluff that’s mounted on a spring, so that it flops around when the kitten bats at it — and eventually knocks it over, as shown below:

Jan is pretty sure that the kitten is a male, but we’re not positive because there is not enough “equipment” in evidence to be sure. Until we know for certain, RoseMarie has decided not to name Kitty. But suggestions from Radio Free Daglan readers would be welcome, with some ideas for a male cat and some ideas for a female. Any thoughts?

This entry was posted in Life in southwest France and tagged cats, Daglan, kittens. Bookmark the permalink.

10 Responses to Our newest (and tiniest) neighbour