Dinner at a Parisian classic

La Coupole isn’t exactly ancient — it’s not even 100 yet — but it’s certainly a Parisian classic. And just recently my wife Jan and I enjoyed dinner at this famous Montparnasse brasserie.

The occasion was the start of our early September journey to the outer reaches of the Greater Daglan Area — okay, our destination was the island of Crete — and as always, we spent a night in Paris on the way out, and on the return trip.

Our interest in La Coupole had been stoked by a television series on amazing places to eat in Europe, including Paris, as well as Scotland, Spain and Italy. Along with a personal Parisian favourite of ours, La Tour d’Argent, La Coupole was featured.

Here’s a look at the entrance to the brasserie, as we emerged from our taxi:

Looking up from the street.

For a quick overview, I can’t do better than the following description of the restaurant, which I’ve taken from the TimeOut Paris website:

La Coupole in Montparnasse is the grandest of grand Parisian brasseries. An Art Deco triumph on an extraordinary scale, its famously vast dining room was once regularly graced by the top tiers of the artistic Rive Gauche set like Picasso, Jean-Paul Sartre and Simone de Beauvoir. People still come here from all over the world, to marvel at its splendour – all 1000 square metres and 33 pillars of it – and to people watch, a timeless La Coupole pastime.

When Jan and I arrived, around 7:30 p.m., the restaurant was just starting to get busy, so the following photograph doesn’t give a real sense of the hustle and bustle that continued to increase until we left, around 9 p.m. But you will get a sense of its décor, and grandeur: 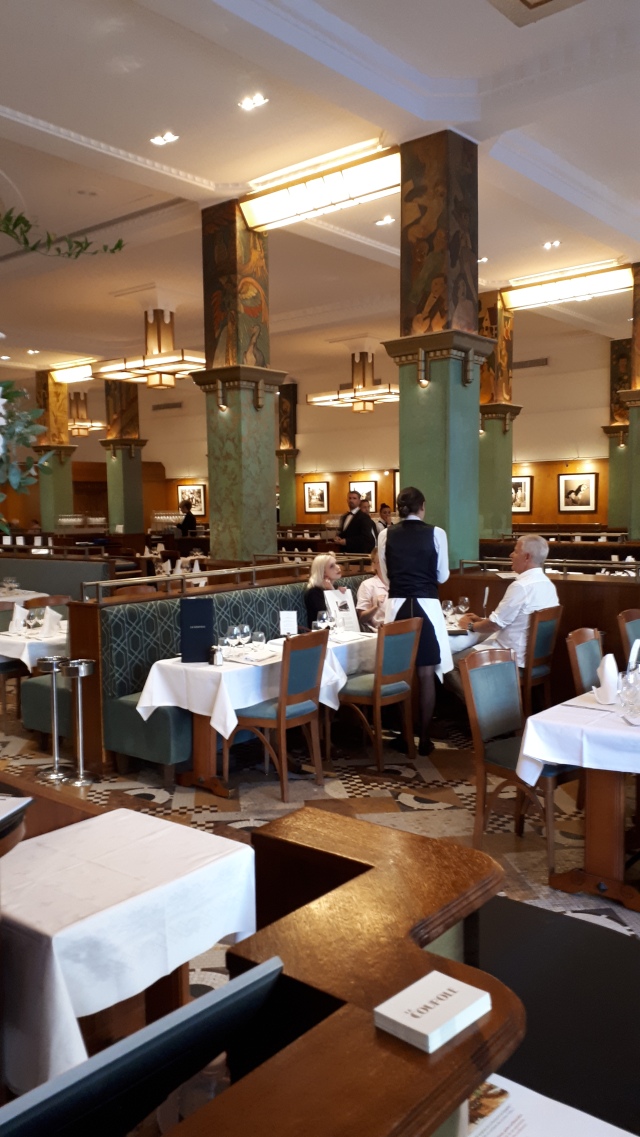 The cover of the menu will give you another sense of the style of this restaurant, which opened (to great acclaim, apparently) in 1927:

Is this Art Deco style, or what?

When it comes to food, La Coupole is well known for several categories of dishes, including seafood, curries, and of course French classics. So for our entrées, Jan had a beautifully fresh crab salad, and I had three plump oysters. For our main courses, Jan chose grilled lobster while I had veal kidneys in mustard sauce. Here are the entrées:

Throwing caution (or restraint) to the wind, I decided to end my dinner with that old-fashioned French dessert, Crêpes Suzette. It’s a dish I haven’t had in, what, 30 years? But it turned out to be every bit as good as I had remembered, and of course the preparation is a great show. Here’s our waiter, at work:

Would we go again? Absolutely. In fact, as our dinner concluded, I was thinking about a couple of friends of ours who have spent very little time in Paris, even though they have a holiday home in France. If we meet up with them in Paris one of these days, La Coupole will be on the itinerary.

4 Responses to Dinner at a Parisian classic