The fascination of fascinators

I can’t recall the last time I was invited to an event hosted by Britain’s royal family — oh wait, that’s right, it was never — so my only previous knowledge of fascinators came by way of photos.

This occurs to me because it seems like fascinators are a fashion item that goes with “royal” just as “Radio Free” goes with “Daglan.”

For example, this is one short description I found on the Internet: “Fascinators—tiny, elaborate hats that are clipped to the wearer’s head—are a popular fashion choice among the women of the royal family today.”

Two members of the royal family who are famed for wearing fascinators to various social events are the daughters of Prince Andrew — Princess Beatrice and Princess Eugenie. Here they are: 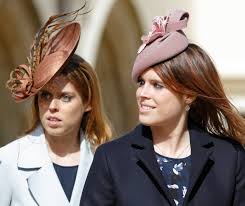 I can almost hear you thinking: Why in the world is he writing about these things? And then you’re (possibly) thinking, please do explain more about them.

The reason for this posting is that when my wife Jan and I were planning to attend a wedding in Bergerac recently, she said that instead of buying a new hat, she had picked out a fascinator.  But she wanted my seal of fashion approval, so I was to meet her at La Petite Minoche, the lovely hat shop on Daglan’s main street. And I did indeed like her choice, so she bought it.

The real surprise came at the wedding itself. As a rough estimate, I would say that only half the women in attendance were wearing a head covering — but out of them, it seemed like at least two-thirds were fascinators, rather than hats. So clearly, fascinators are also really popular with fashionable French women — not just royals.

Finally, a bit of history — courtesy of a website called Mental Floss:

The term fascinator first surfaced in the fashion world in 17th-century Europe. Back then, it referred to a lacy scarf women wrapped around their heads (or “fastened,” hence the name).

By the mid 20th-century, a slew of new hat styles hit the scene, leaving both the term fascinator and the garment it described to fall out of fashion.

In the 1960s, a New York milliner named John P. John decided it was time for the fascinator to make a comeback. Instead of thinking about the headpiece in its original sense, however, he used the name to re-brand the petite cocktail hats that were known at the time as clip-hats or half-hats. The sexy new name helped the already-popular design become even trendier.

So there you go — possibly way more than you wanted to know. But personally, I found the topic, well, fascinating. But I doubt it will come up again in Radio Free Daglan, at least for the foreseeable future.

3 Responses to The fascination of fascinators