Sunday’s special event at Daglan’s Salle des fêtes — the fashion show, English tea, and clothing sale — turned out to be quite the success.

A good time was had by all, as the saying goes, and the volunteers of the Club de l’Amitié Daglanaise (or Daglan Friendship Club) raised nearly 1,000 euros for charity. The room wasn’t completely packed, but there was a good turn-out, with lots of opportunity to chat with friends.

I described the event in “Fashion show and a tea, with some twists,” posted on May 20. So check that out if you’d like to see the details.

And now to the actual event, held yesterday (June 2):

For a start, the setting was just right. At the front of the hall, there were racks and tables full of donated clothing (all of it in good shape; all of it with surprisingly low prices); and at the rear, rows and rows of attractively set tables.

First came the English tea — plates of cakes and scones and delicate sandwiches, and pots of good tea, plus glasses of Prosecco for a couple of euros extra.

And then came the fashion show, featuring six women volunteers, each showing off four different sets of clothes, from pants and jackets to dressy gowns. The models and their clothes were accurately (and sometimes amusingly) introduced in English, and then in French.

I took lots and lots of photos, but in the interests of moving things along, I’ll just give you a taste of the fashion parade — starting with Rosemary: 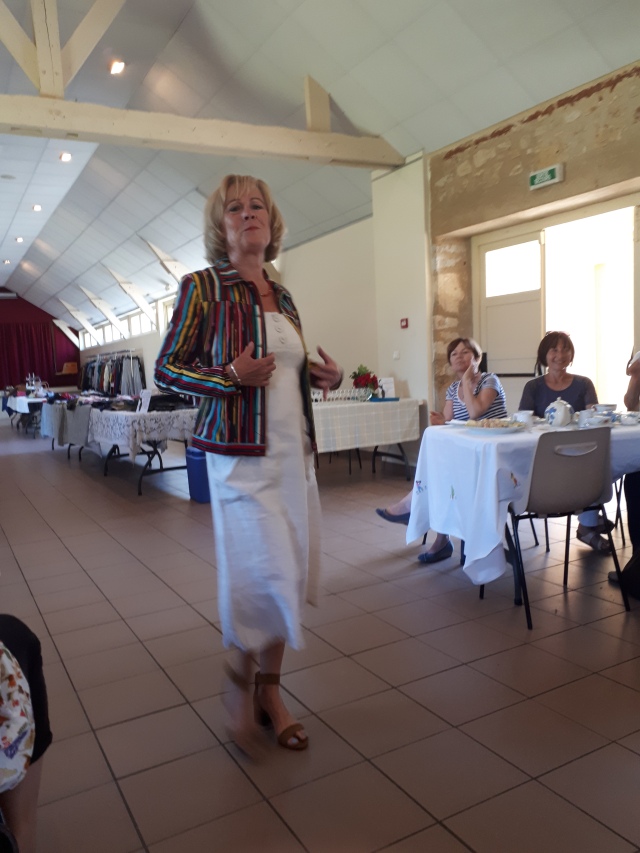 A good-looking jacket over a simple dress.

One of the livelier models was Teressa, who had travelled here from Scotland to see her friend (and club member) Letitia. Here she is, showing off an outfit and an infectious laugh:

And modelling a beautiful dress (that she subsequently bought) is my wife Jan, looking quite wonderful:

Finally, here’s the lineup of all six models, coming out to take their well-deserved bows, with lots of applause:

When the fashion show ended, it was time for people to review the clothing for sale and make their purchases, which they certainly did. Finally, it was time to start the clean-up (which was finished this morning — leaving the Salle des fêtes spot-less).

There was quite a lot of food left over, and it’s shown here on a table in the hall’s kitchen. This will give you some idea of the quality and variety of the cakes that were offered: 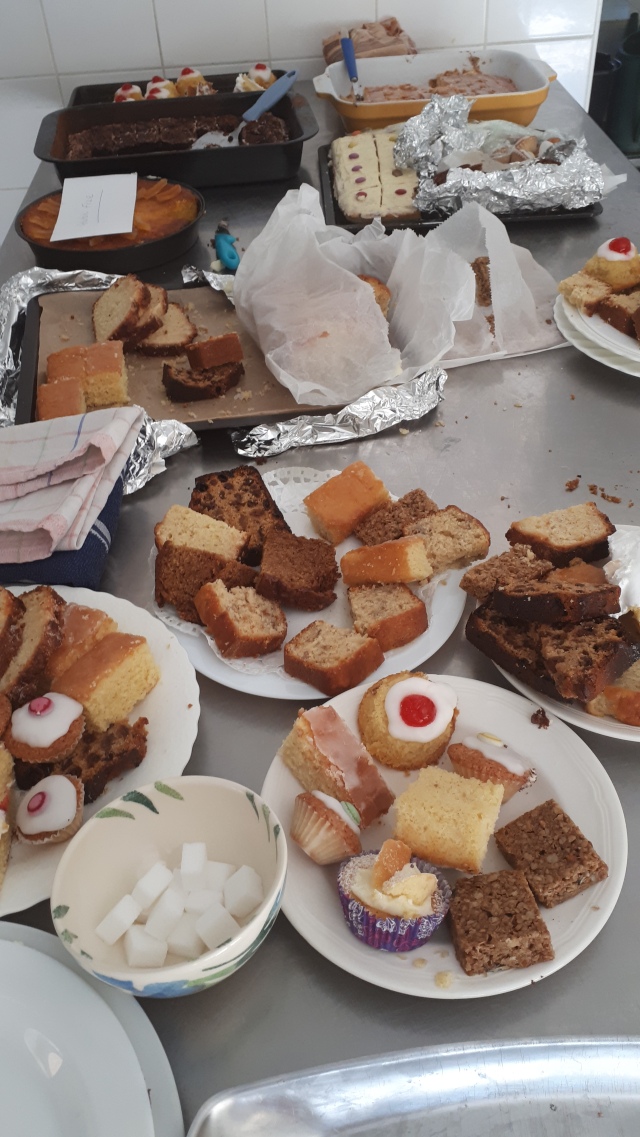 Check out all the goodies!

I’ll close this posting with just a few other comments:

The models. I was quite impressed with how the six volunteer models performed — sauntering along, sometimes twirling around, waving their hats, and generally looking like they were having fun. Who knows? Maybe a few will go professional.

The volunteers. Events like these require a surprisingly large amount of work, and all the women involved should be quite proud of themselves (in addition to feeling  exhausted). With excellent planning at the start, and then solid organization, the event was run like clockwork, and everything from the afternoon tea to the fashion show was first class. Well done, you all!