If you’re asked to locate “the south of France,” you probably would say either “Provence” or “the French Riviera, as far east as the Italian border.” If you’re asked about southwest France (where Daglan is located), you might say “south of Bordeaux, and down to the Spanish border.” All good answers.

But now my wife Jan and I have travelled to a seriously south part of Deep South France — to Martinique, which is a département and Region of France, and has a population of about 375,000. It’s located in the Caribbean, a bit south of Dominica and a bit north of St. Lucia.

In late February and early March, we spent a warm and relaxing week at the Club Med on Martinique, about an hour’s drive south of the airport in the island’s main city, Fort-de-France.

When we lived in Toronto, we often vacationed in the Caribbean islands, from Anguilla and the Bahamas to Grenada and Montserrat, and many more. But Martinique was our first French island, where the currency is the euro and the main language is French and the electrical plugs are just like the ones we have in Daglan. Easy!

Making it all the more fun was the fact that six of our best friends — all members in good standing of the Wild Forest Pig Contrada — were there with us.

What follows in the remainder of this posting is primarily a visual record of just how warm, tropical and lovely the island is.

I’ll start with a view outward towards the Caribbean, from the beach at the Club Med:

Looking out over the Caribbean.

One of our previous concerns about a Club Med vacation was that we’d be pressured into a bunch of activities. But as we learned on our vacation at a Club Med in Morocco, you don’t have to take part if you’re not interested. So, for this dance-around-the-pool activity, we just stayed on the sidelines (in lounge chairs): 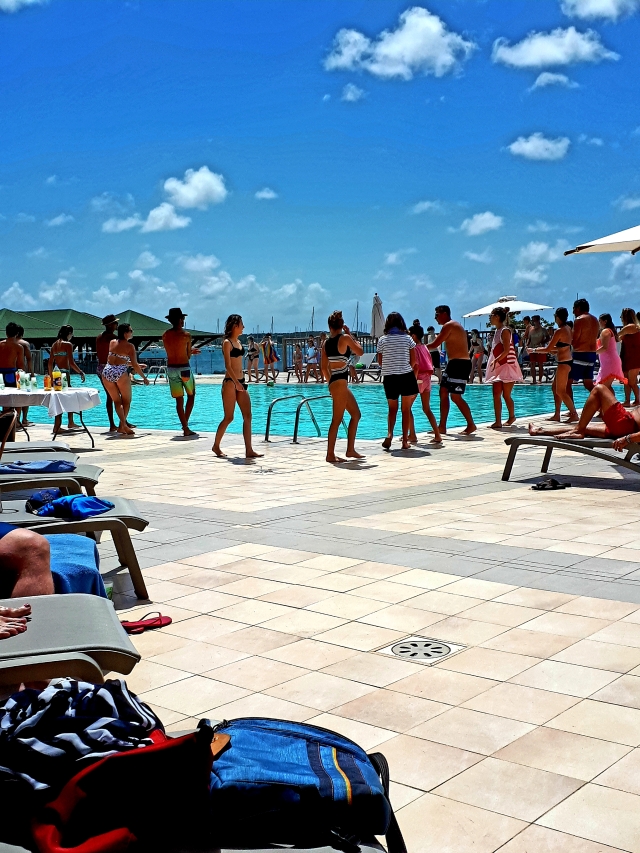 Lots of action around the pool.

Nice views were part of the attraction of our stay, whether we were on the beach, at the pool, or in one of the open-air eating areas. Here’s another look: 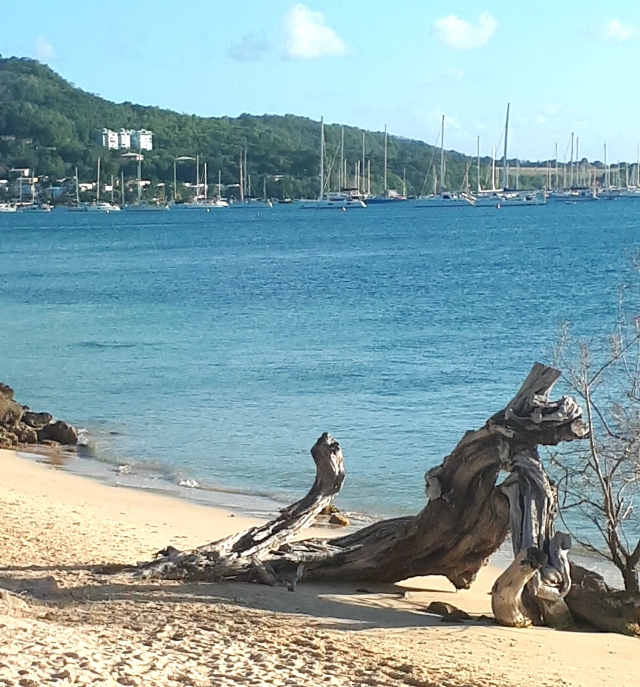 Lots of boats across the harbour.

Palm trees were pretty much everywhere at the sprawling Club Med property (a bit too sprawling, I thought), and this is the view from the back patio of our room: 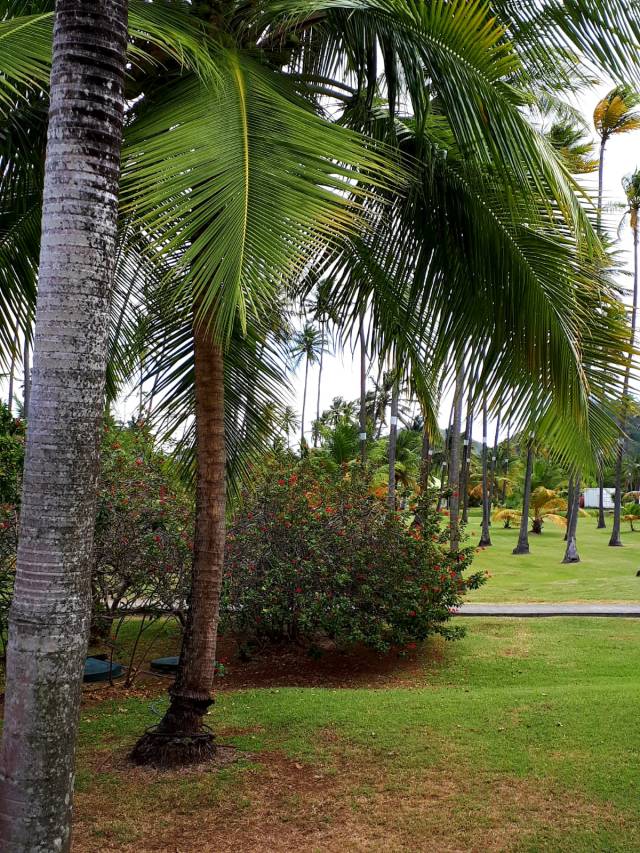 In the morning, exercise classes were held in this shelter, which I’ve photographed from the open-air dining room where I was having breakfast: 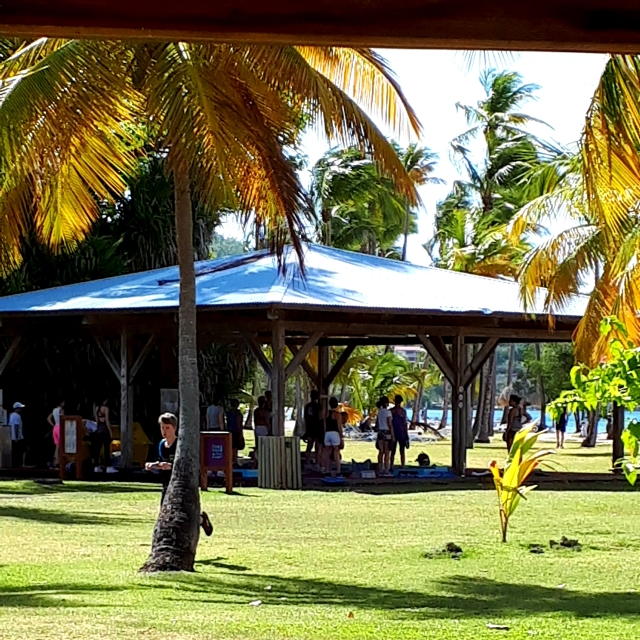 The place for exercise classes.

Water skiing, kayaking, and kite-surfing were among the available activities, and here’s our intrepid friend Keith out in a kayak:

So many destinations, so little time.

I went off the Club Med property only once, when our group of eight walked to a beach-side restaurant for lunch. But others ventured farther, into the village of Saint Anne. Here’s Keith again, with his wife Kathy, at a colourful market in the village (photo by our friend Darlene): 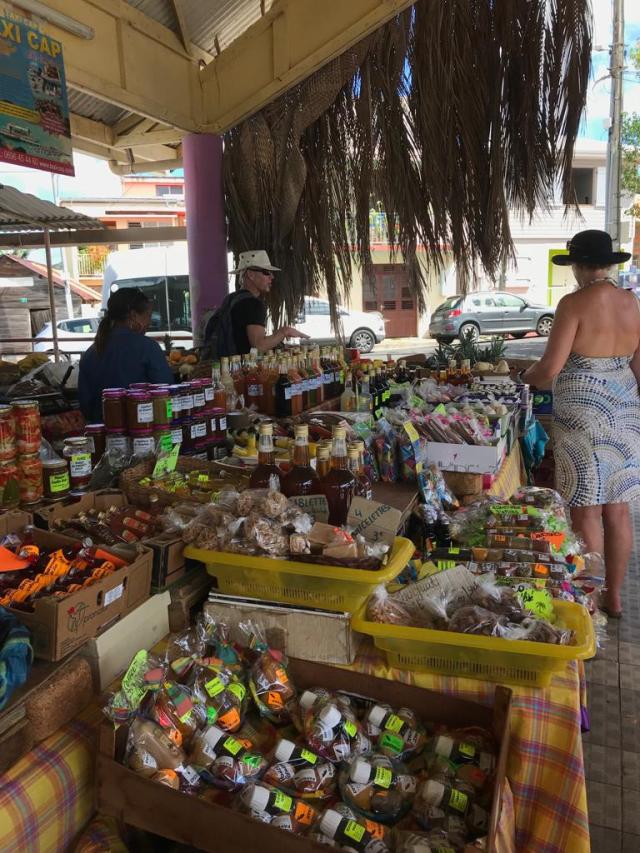 This entry was posted in Travels in and out of France and tagged Caribbean islands, Daglan, Martinique, vacation. Bookmark the permalink.