Occasionally,  new made-up words (neologisms, if you must) make my teeth ache. Like, for example, glamping. (I simply can’t reconcile the concepts of “glamour” and “camping.”) And then there’s locavore, referring to someone who prefers to eat food that is grown or produced relatively nearby. Grrrr — was that word really necessary?

Be that as it may, here in the Greater Daglan Area — and, I suspect, many regions of Europe — being a locavore is almost automatic. That is, local dishes and traditional recipes reign supreme, and attempts to change them (You’re adding parsley? Are you crazy?) are seen as downright heretical.

So in the GDA, you can’t go far without stumbling into regional  foods like confit de canard, cakes made with walnuts, foie gras from local geese, Rocamadour cheeses, early strawberries from St. Martial, and so on.

(Not that these are bad things; they’re actually quite delicious. It’s just that there are times I would like to buy some hickory-smoked brisket, a bagel, Canadian cheddar, or pepperoni sausage.)

If you do want to be quite authentic in your local-food choices, you have lots of shopping options. Here in Daglan, for instance, we have the Sunday market, but there are larger weekly markets in St. Cyprien, Sarlat, Cénac and Cazals, to name just a few. And of course, there are the nearby supermarkets (Cénac, Gourdon, Sarlat), where lots of local meats, fruits and vegetables are sold.

One of the nearby places that my wife Jan and I have found worth exploring for local foods is a store located on the edge of the main parking lot in Cénac (where that village’s Tuesday market is held), just 10 kilometres from Daglan. Here’s a view of it:

Jan has found some tasty food items in Ferme de Quinte, which prides itself on selling local meats and produce. For example, she has bought packets of tender beef cubes, which made for a wonderful and tender bœuf bourguignon. Several times she’s bought pork ribs, which I prepare in my time-honoured way — slow-cooking them in a little beer, and then finishing them in a hot oven, slathered in barbecue sauce.

But recently, she came across a product that was new to us — côtes (ribs) of something called marcassin, at 23 euros per kilogram. Since she didn’t know what the meat was, she asked at the check-out desk, and was told that marcassin refers to a young wild boar.

Since we have enjoyed sanglier (wild boar) many times, Jan decided to give les côtes a try, and bought two packages totalling almost a kilogram in weight. We weren’t sure how to cook them, but I figured I would try the same technique I use for “regular” pork ribs. And here’s the marcassin, resting in a bit of gluten-free beer, ready for the oven: 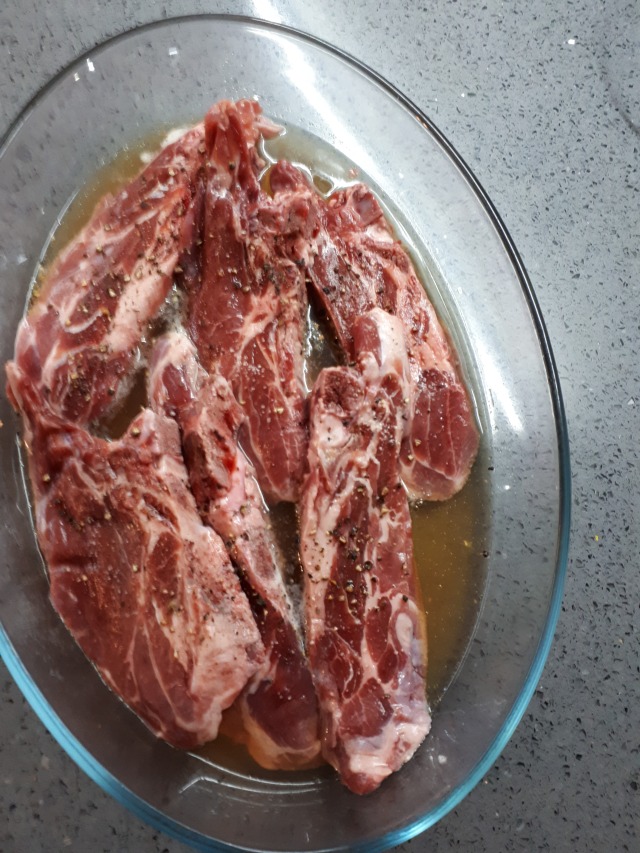 Just waiting to go into the oven, covered in foil.

Well, I did my best, but the new product was not a big hit with us. Jan’s verdict: “Tasty — but chewy.” After chomping on them for quite a while, we both decided that “chewy” was the meat’s over-riding feature.

On the plus side, I did a bit of Internet research on the ribs’ place of origin, and found that there’s a farm called Les sangliers de Mortemart (The wild boars of Mortemart), near the village of Le Bugue.  There, the boar are raised outdoors, in different areas (depending on their age), and are fed various grains by the breeder, Richard Manseau,  while also foraging in the farm’s acorn and chestnut forests.

Even better, you can get guided tours of the farm, and see the animals up close and personal — but safely. Here’s what one reviewer wrote on TripAdvisor: “An interesting way to spend an hour or so, and an opportunity to get up close to an animal you probably wouldn’t want to meet in the wild.”

There’s also a store on the property, offering a wide variety of meat products — from the wild boars, of course, but also from ducks.

So Jan and I are planning a visit once the weather improves from the current cold-and-wet conditions. And hey — the farm just may become a new pilgrimage destination for members of the Wild Forest Pig Contrada, when they’re visiting us in the GDA.