Rain obviously plays a critical role in the Greater Daglan Area, not only watering our many forests and fields of corn, sunflowers, tobacco and walnut trees, but also feeding our creeks and rivers. But it’s not exactly Mr. Dependable.

This spring, for instance, was incredibly wet. We had so much rain  that once, when I was driving friends to Bergerac, I could see that the mighty Dordogne River was running a rusty red colour as we approached Lalinde. The cause? All the reddish mud being carried into the river from streams, creeks and tributaries along the way.

It’s always a bit surprising how quickly our rivers fill up — to the point that the Dordogne usually overflows its banks at least a few times a year.

Just north of Daglan there’s a small bridge over our little Céou River, itself a tributary of the Dordogne, and I typically cross the bridge to get to the bicycle path and walnut groves where I regularly walk. Just a few weeks ago, I could look down from the bridge and see trout swimming. But not now.

Along with a very long spell of ferocious heat, we’ve had virtually no rain for several weeks. And here’s how that little bridge over the Céou looked on Sunday morning:

Once a small river, now a pond.

All that remains of the Céou in this area are a series of small ponds, and large stretches of rocks, logs and branches. Here’s another photo of the bridge, a bit closer up: 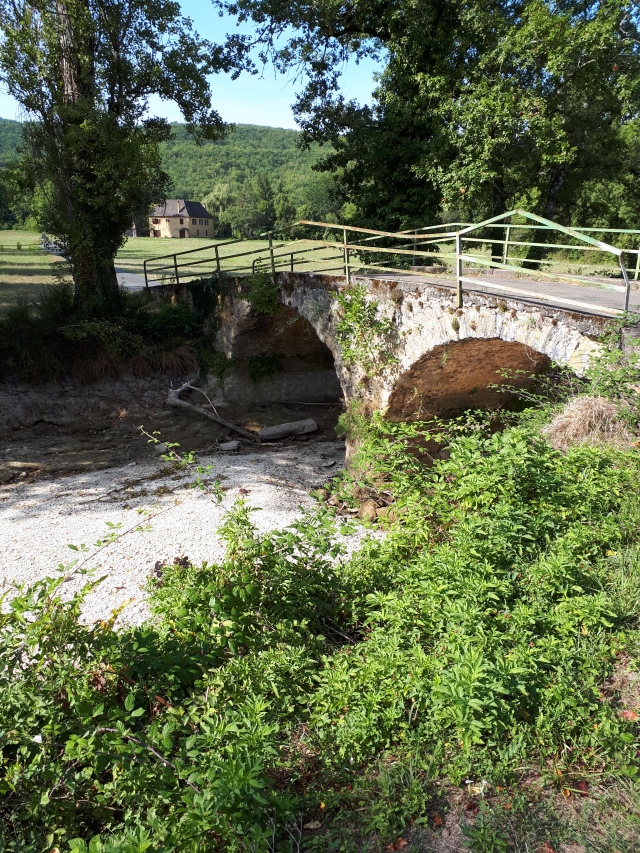 No water, but lots of rocks, branches, and logs.

That may look like fast-moving white water in front of the bridge, but I’m afraid it’s just a bed of limestone. However, we are supposed to get at least some rain, later in the week. Phew.

This entry was posted in Agriculture in the Dordogne, Flora and fauna, Life in southwest France, Walking in the Dordogne, Weather in the Dordogne and tagged Céou River, corn, Daglan, dordogne river, nature, rain, sunflowers, tobacco, walking, walnut groves, weather. Bookmark the permalink.

6 Responses to How dry we are …