Catching up with Tuesday (V-E Day)

This past Tuesday was the 8th of May, celebrated in France as the Fête de la Victoire, which is the anniversary of the end of World War II, at least in Europe. Because my wife Jan and I have been in a bit of a social whirl this week, I’m just getting to write my report now.

Last year, I posted “Democracy at ground level” (May 8, 2017) which covered not only the V-E Day ceremony but also the voting and ballot-counting for the French national election.

This year’s ceremony in Daglan was relatively short, with no special additions, such as school children singing or reciting poetry. I thought it was reasonably well attended, and properly sombre. And it took place in welcome sunshine.

The ceremony begins with our village officials gathering in front of the restaurant Le Petit Paris, next to the war memorial. Here’s a first look, as our Mayor, Pascal Dussol, walks briskly to his position, to begin his remarks:

The Mayor heads for his position.

And now everything and everyone are in place, as the ceremony begins:

Ready to place the flowers.

This is when two senior members of the village council place flowers at the foot of the flagpole, in front of the war memorial, assisted by a young girl: 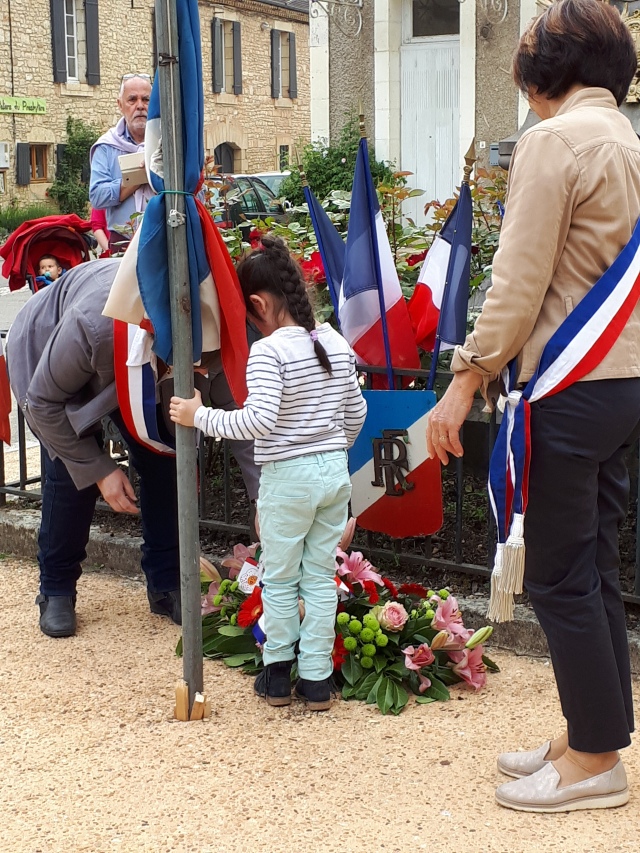 Flowers at the base of the flagpole.

With the flowers in place, it’s time to raise the French flag over the ceremony:

The flag is being raised.

The ceremony then proceeds as it has in the past — lengthy remarks by the Mayor on the meaning of the day, singing by those assembled (which of course includes the national anthem), and a moment of silence.

And then we all walked along to the nearby playground of Daglan’s school, next to the Mairie, for the vin d’honneur — drinks and a selection of snacks, and of course the inevitable chatting in French and English about recent events. Convivial!

This entry was posted in History in France, Holidays in France, Life in southwest France and tagged ceremonies, Daglan, French flag, May 8th. Bookmark the permalink.

2 Responses to Catching up with Tuesday (V-E Day)