Our own velvet fog

More experienced (that is, older) readers may remember the talented American musician, Mel Torme (1925 – 1999). His vocal style was so smooth that he was dubbed The Velvet Fog.

In the Greater Daglan Area, at this time of year, we have our own velvet fog. It’s not a singer, however. It is, not to put too fine a point on it, actual fog.

Yesterday we had quite a dose of the grey stuff. As I drove towards Gourdon in the morning, I spent several kilometres on winding country roads which are not only narrow but unmarked with white lines down the centre, or anywhere else. Since I couldn’t see very far ahead, I took the drive nice and slowly. (Fortunately, on the drive home from my aqua fitness class, the fog had mostly lifted.)

I’ve often said that when I drive on country roads in fog, or rain, or twilight, or night, I’m very happy that I’ve driven on these roads before, and can anticipate hills and turns as they appear.

I didn’t take any photos yesterday — it seemed too hazardous to stop my car in the fog — but I do have one to offer from a few years ago. It shows a few of us on our bikes, heading up from Daglan towards Castelnaud, and it will give you the idea: 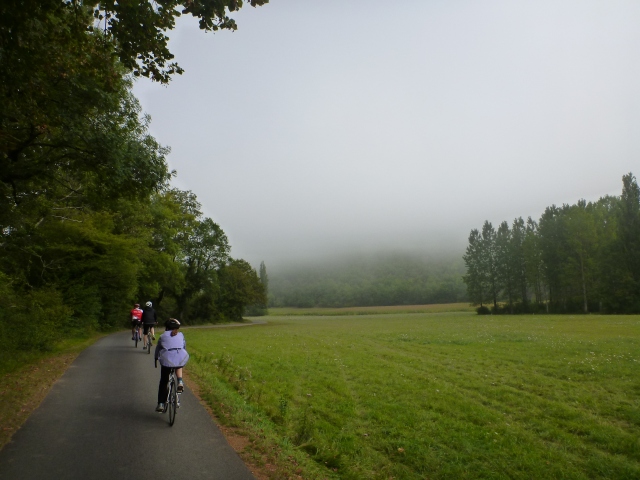 Fog over the countryside.

This morning, the weather has switched gears just a bit, and seems to have given us plain old cloudy weather, rather than fog. Here’s a view up towards Daglan’s church steeple: 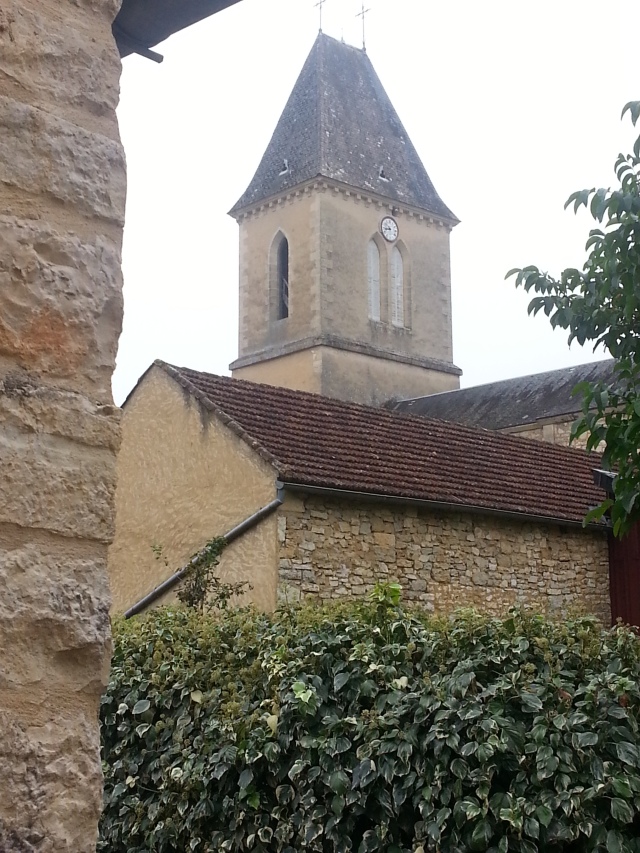 Not the bright blue sky we love.

If there’s a message here, it’s that when you’re in the Greater Daglan Area on autumn mornings, be prepared to take it easy when driving.

This entry was posted in Bicycling in the Dordogne, Life in southwest France, Travels in and out of France, Weather in the Dordogne and tagged bicycles, bicycling, cycling, Daglan, Dordogne weather, fog, foggy weather, nature, rain, weather. Bookmark the permalink.

5 Responses to Our own velvet fog