You’ve probably moved beyond the stereotypes of British cooking. You realize that not all British food means over-cooked vegetables and grey meat, or fatty sausages topped with brown sauce.

My wife Jan and I certainly did, on our recent long-weekend trip to the Isle of Wight. There we had a wonderful Saturday lunch with friends Elisabeth and Gerhard. We were at Thompson’s in the town of Newport, where the chef (and owner) is the youngest chef in the U.K. to have been awarded a Michelin star. (He earned his stars at other restaurants, before opening his own.)

So now to get up close and personal with the new British cooking at that restaurant in Newport. Here’s how it looks from the sidewalk:

Thompson’s is a comfortable, relaxed kind of place, with an open kitchen. The four of us sat directly in front of Chef and his brigade as they worked:

The four of us sat right in front of the action.

Once we got settled with our apéritifs and reviewed our menus, we decided on the three-course lunch at 29 pounds. The tasting menu, at 49 pounds for the food alone and 79 pounds with wine pairings, looked tempting, but simply seemed like too much food.

Even so, we were given several amuse-bouches before the first entrée arrived. They included several light gougères au fromage, and then this bowl of minced ox tongue and potatoes. It was so good that Elisabeth said she would have been happy with just a larger bowl of the mixture for lunch, with no other dishes. Here’s my bowl:

Our tasty starter. (One of them.)

For my entrée, I ordered a “crispy poached duck egg” (a poached egg, lightly breaded, then deep-fried) over walnut mayonnaise with a scattering of green beans and a walnut vinaigrette. Here’s my dish: 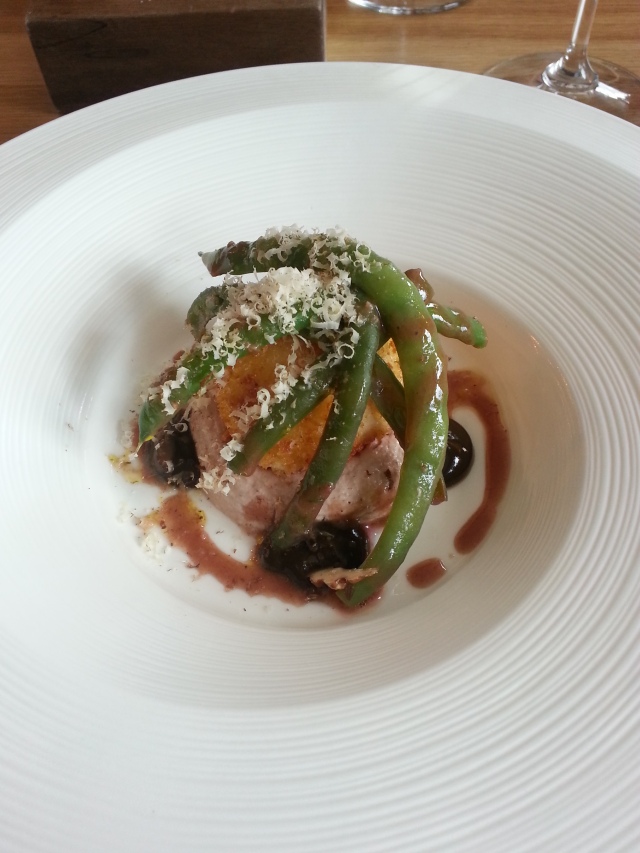 Jan loves sardines, and so it was no surprise that she ordered this dish of grilled Cornish sardines:

Sticking with seafood, for her main course Jan ordered the “day boat plaice cooked on the bone,” and seemed delighted with it. No wonder:

Gerhard, Elisabeth and I all ordered the “slow-cooked short rib of beef in treacle and beer,” served with a grilled shallot filled with a braised oxtail mixture, and topped with several crunchy onion rings. The beef was amazingly tender, and completely delicious. Here’s my plate: 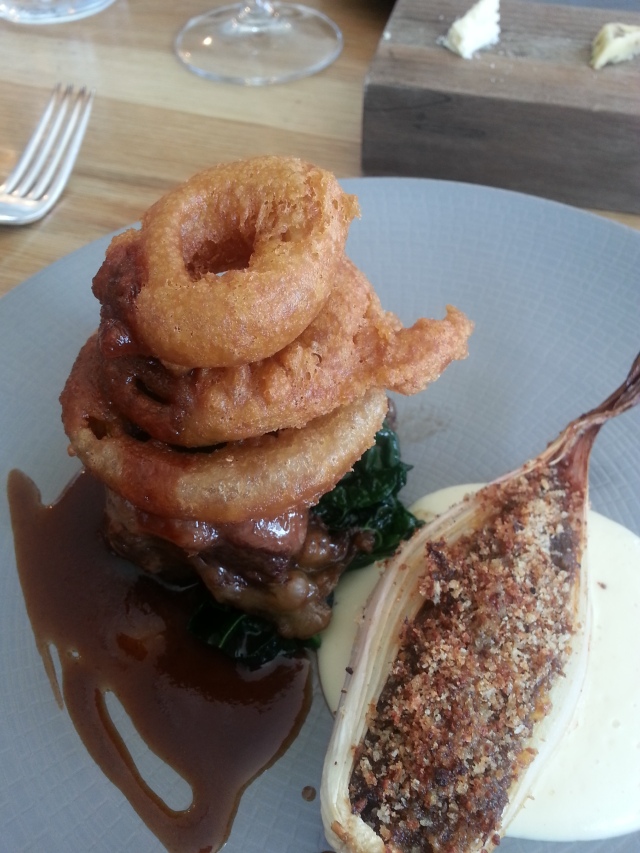 For me, the beef was the star of the show.

For dessert, I chose this cherry and almond tart, which had a lovely taste and was topped with a scoop of ice cream (although I found the crust a bit hard and over-baked): 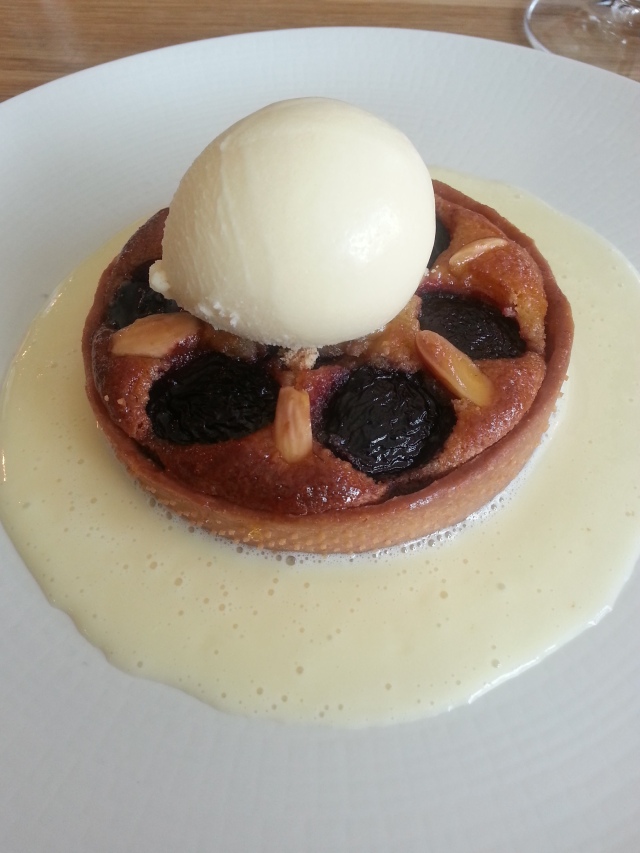 Delicious, but with a too-tough crust.

Jan’s choice, a peach and raspberry sundae, looked like an explosion of summer treats:

An explosion of summery tastes.

So after coffees, we left the restaurant feeling well fed and well cared for.

Now, how would I describe this particular version of modern British cooking? Well, it’s not really fine dining in the three-Michelin-star sense, but certainly it was fine and comforting food, carefully prepared and plated, delicious all around, and using fresh local ingredients wherever possible. Several dishes were clever, without being overly tricky. And the value was quite good, for such quality.

I had just two niggles. I found the shallot that came with the beef a bit dried out and tough; I think I’d substitute something like a wedge of acorn squash to hold the oxtail mixture. And the crust on my tart, as I wrote above, was a tad over-baked and therefore tough.

But this is a fine restaurant led by a very good chef, and I’d love to go back. I’d also recommend that a few chefs in the Greater Daglan Area have a visit, and see what their English counterparts are cooking up these days. They could learn a thing or two.