Our parade on parade (time-delayed)

Last weekend, my wife Jan and I happened to be away during Daglan’s annual Fête de la Saint-Louis.

Ha! Okay, we didn’t “happen” to be away. We had carefully planned to miss what I call The Festival of Heat and Noise. In fact, we were actually out of the country, at the home of friends Elisabeth and Gerhard. (A good time was had by all, thank you.)

Our trip meant that we weren’t around for the one part of the festival we actually enjoy, which is the Sunday parade.

However, thanks to the miracle of our friend Chris Scott being in the village with not only his family but also a camera, I am able to bring you some highlights from the parade — whose theme was Le Cinema.

We begin with an overview, as the parade starts to enter Daglan, having crossed the Pont Neuf over the River Céou:

Rolling and marching into the village.

Since the theme of the parade was the cinema, it was natural that our village festival would honour that great festival of film which takes place every year on the Riviera:

All dressed up to honour film.

Yes, it was the 69th edition of the Festival de Daglacannes (possibly not the cleverest name, but nice try):

The hosts of the film festival, at work.

French films were honoured in the parade, of course, like the 1962 comedy classic The War of the Buttons (a classic I had never heard of, I confess):

You don’t have to have an elaborate float to take part in the village parade, of course. Just ask these guys: 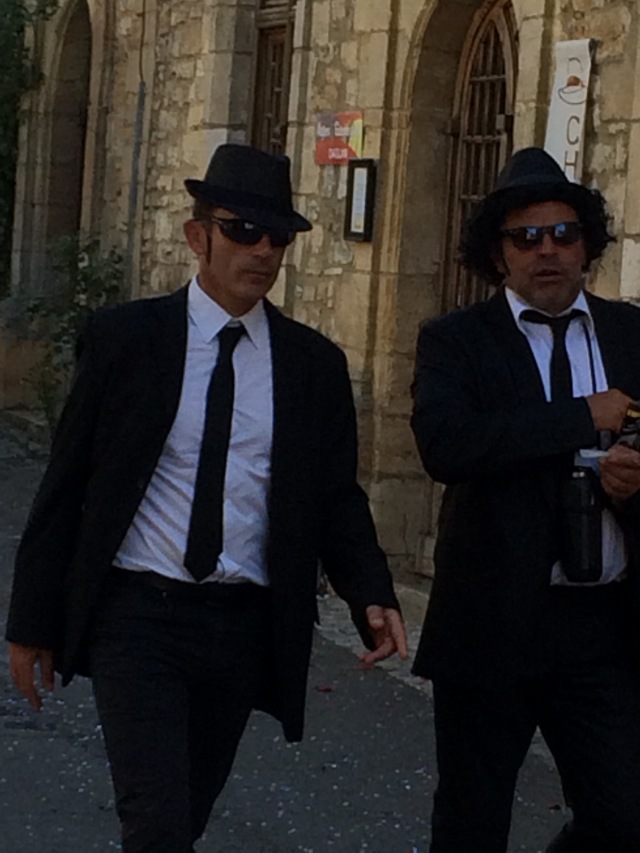 I’m not sure what film these soldiers represented — Saving Private Ryan? — but they were two handsome guys and they were handing out sausage to the crowd, so what the heck:

Then there was everyone’s friend Batman, flanked by two of his own friends:

Of course the film colossus known as the Star Wars franchise had to play a big part in Daglan’s parade, and it did. Here’s the tractor that was pulling the main Star Wars entry, proclaiming that “On the planet Daglan, the Rebellion is fighting against the Empire and the Siths.” (Who knew?)

And here’s a look at the main float itself, which appears to show how the movie was filmed:

Everyone has their favourite character or characters in Star Wars, but I suppose Luke Skywalker is an obvious choice:

Smiling as if the Force was indeed with him.

Every movie needs at least one villain, and Darth Vader is probably one of filmdom’s all-time meanest:

What’s that sound of heavy breathing? 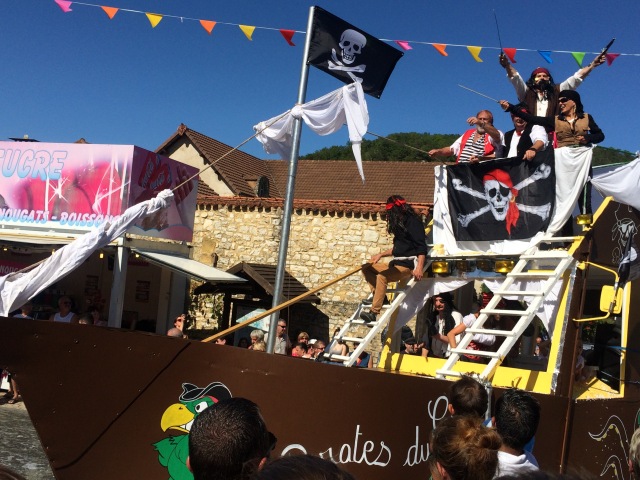 I confess I have no idea what film this next float was meant to represent, but it’s obvious that the generation of foam was an important element, at least for the sake of the parade. (After this was published, our good friend Dave in Toronto suggested that this float probably referenced the French comedies, Camping 1, Camping 2, and Camping 3, in which Patrick was a main character. I didn’t know the films, but after some digging, I believe that Chief Trader, Dave’s Contrada name, is right on.) Anyway, here it is:

Out comes a river of foam.

Evidently, the river of foam kept right on coming, until the main street was covered with it:

Having your main street covered in foam is, for many, a chance to celebrate. And that’s how I’ll close this posting, with final thanks again to Chris for the photos, and to our spunky little village for throwing itself so enthusiastically into this annual event:

Jumping for joy in all the foam.

6 Responses to Our parade on parade (time-delayed)