D-Day: A look back 73 years, and three years

Today’s posting is a remembrance, because June 6, 2017 is the 73rd anniversary of D-Day, the Allied invasion of the beaches of Normandy, getting “boots on the ground” to begin the final defeat of Hitler’s Nazi forces.

Almost three years ago, my wife Jan and I left Daglan for a short vacation in Paris, and we decided that we should finally visit the Normandy beaches. Because we are both Canadian citizens, we chose the beach where the Canadian troops came ashore — code name Juno, near the village of Courseulles-sur-Mer.

I described our train trip to Caen, and our visit to the Juno Beach Centre,  in  “Triumph and tragedy: A visit to Juno Beach,” posted on August 29, 2014. (Easy to find in Radio Free Daglan’s archive.)

When we arrived in Caen, we found the platform lined with photographic posters from the war. This is one of them, showing two Canadian soldiers checking out a train at the Caen station itself. You can see the apprehension in the eyes of the soldier at the left, as his partner enters the train: 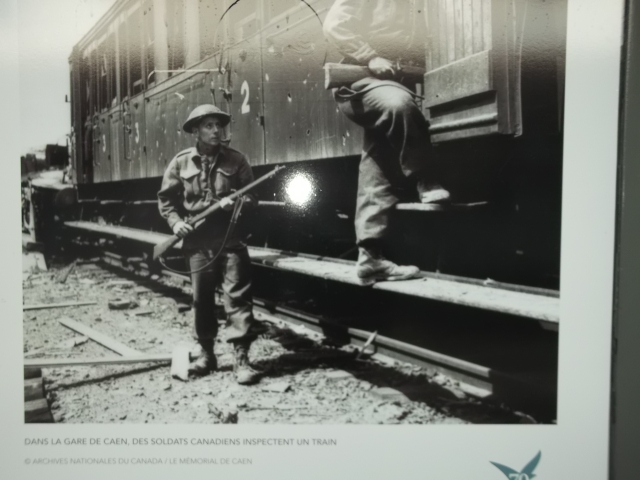 Canadian troops and a train.

This next photo shows Jan on the windswept beach near the Juno Beach Centre, with both the French and Canadian flags flapping:

Jan and the two flags.

Of course, losses were horrific on D-Day (known to the military planners as Operation Neptune), and the days that followed. This next photo shows a particularly striking and moving tribute to the Canadians — 359 of them — who were killed on the invasion’s  first day alone:

A marker for each Canadian killed on Day 1.

By the end of that day, June 6, 1944, some 155,000 American, Canadian and British troops had successfully stormed the beaches on Normandy, to begin the long and incredibly difficult sweep across Western Europe and into Germany.

I think it’s worth remembering not only the freedoms that we ultimately gained from the success of D-Day — and of course many other operations and battles — but what it took to achieve the success. Unbelievable bravery, staggering expense, and of course an immense amount of international cooperation and coordination. Seems to me that the West could use a lot more international cooperation about now, and a lot fewer tweets.

2 Responses to D-Day: A look back 73 years, and three years