If you’ve been paying the least bit of attention to the news, you already know that yesterday, Emmanuel Macron was elected the next President of France. There is already a ton, more or less, of commentary and analysis available.

But what was yesterday’s voting like at the rez-de-chaussée, or ground floor? For that, of course, stay tuned to Radio Free Daglan, where we keep a beady eye on the workings of democracy in our village.

We begin at the Mairie, the office of the Mayor, which was where voting took place yesterday in Daglan. Here are the signs pointing the way: 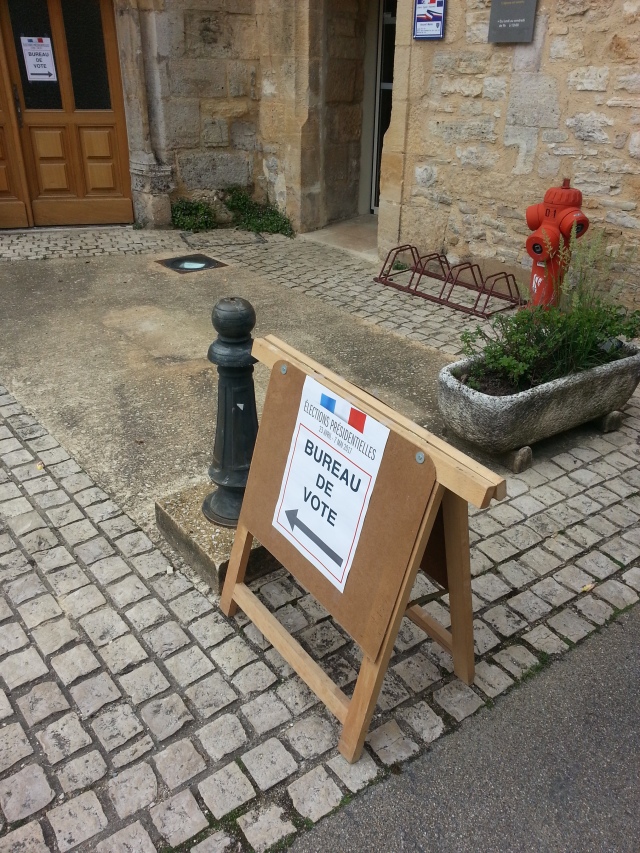 And here’s the front door of the Mairie, where citizens entered to find their way to the Bureau de Vote:

And here’s an actual citizen heading to the actual Bureau de Vote, at about 12:45 yesterday afternoon:

What happens next, once the voting ends? Well, at the end of the day it’s time to count the ballots — and it turns out that the process is quite a community affair, and one that is full of checks and double-checks.

Some time after 7 p.m. last night, my wife Jan and I made our way back to the Mairie, and entered a meeting room where almost every chair was taken.

At the head of the room was a table with five civic officials doing the counting — the Mayor, the 1er adjoint, the 2ème adjoint, and two Conseillers Municipaux. To begin, one of the councillors, Lydie Pasquet, opened each small envelope, took out the ballot, and handed it to Thierry Cabianca, the 2ème adjoint, who checked the ballot to make sure it was valid.

He in turn passed the ballot to our Mayor, Pascal Dussol, who read out the name on it — “Macron,” he would call out, or “Le Pen.” Then he put each ballot in a pile on the desk. Sometimes the envelope was empty (vide), or otherwise invalid (null or blanc). The Mayor would call out the spoiled ballots as well.

With each vote that the Mayor called out, the 1er adjoint, Marie Vasseur,  and another councillor, Patrice Hillion, each with sheets of paper in front of them, would put a checkmark for “Macron” or “Le Pen” (or a spoiled ballot) in the appropriate place, and simultaneously call out the total number up to that point. “Dix-huit,” they would call out together, and then “Dix-neuf,” and so on.

Most interesting, a number of citizens in the audience were keeping detailed track of the vote count on their own score sheets. Pretty serious stuff.

And here’s the view of the counting table, from where I sat (at the end of the room, with the dark hair, is our Mayor): 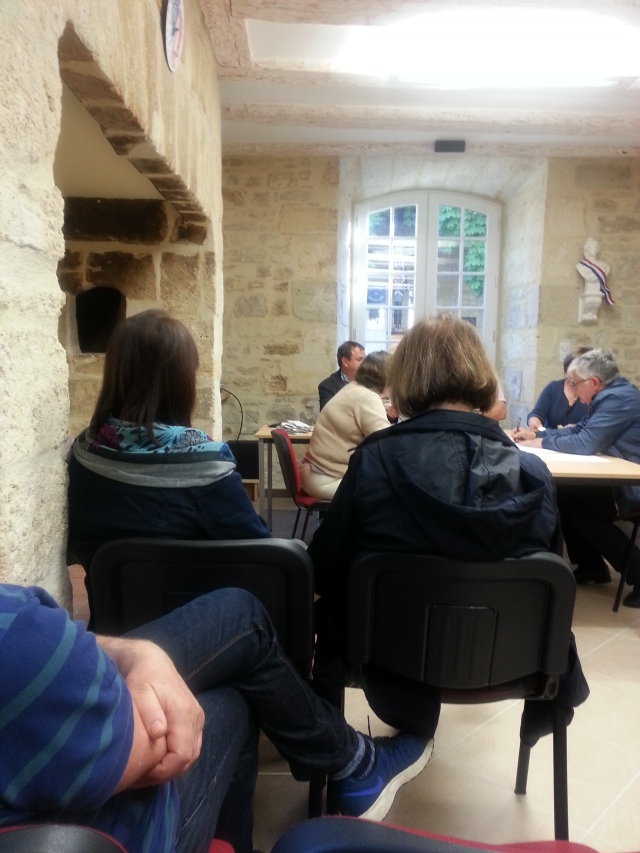 Our Mayor called out the votes.

Once the counting was done, everything was checked again, and eventually the numbers were sent off to be added to all the other results from villages and towns and cities across France.

So it seems there was a fair amount of grumpiness about the two choices. And we got a taste of it on the way home, after the count.

A neighbour of ours, a young mother, was standing in front of her house as we passed. In case she hadn’t heard the news, I called out “Macron.”

She nodded, didn’t say anything, but looked fairly miserable about the whole affair. So I said something that I thought might cheer her up: “Eh bien,” said I, “c’est mieux que Trump.” That brought a faint smile to her face. “C’est vrai,” she replied, “Je suis d’accord.”

Lest we forget: In other news involving the state of the nation, this morning Jan and I again attended the annual ceremony for the Fête de la Victoire (V-E Day) at Daglan’s war memorial, to remember the horror and sacrifices of the war in Europe, that ended in May 1945. Here is the small group assembling in bright sunshine: 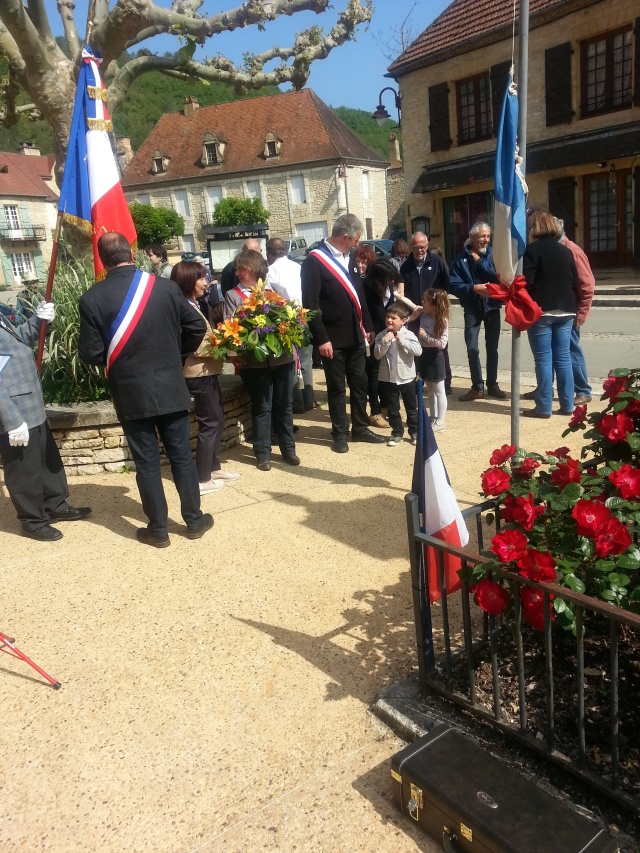 Gathering before the Mayor’s speech.

After the placing of the flowers, the speech, the moments of silence, and the singing, we walked off to the courtyard of Daglan’s elementary school, next to the Mairie, for the traditional vin d’honneur. Here’s the group, getting organized for the drinks and snacks:

Getting organized for a drink and a chat.

As for me, my vin d’honneur was actually a small plastic cup of whisky, poured by the Mayor. He apologized for not having any ice cubes available. Pas grave.

2 Responses to Democracy at ground level