The days are getting pretty toasty, and so it’s time for Daglan to start preparing for its annual Fête de la Saint Louis, which I have taken to calling The Festival of Heat and Noise.

The four-day extravaganza takes place when the weather is about as hot as it gets here (which is pretty darn hot), and features (among other things) some amusement rides placed smack-dab in the middle of the main village square. These are equipped with huge speakers, perfectly positioned to blast out music at all hours, usually up until about 2 a.m. (Even “Girls Just Gotta Have Fun” gets a bit tiresome around 2 a.m.)

The event goes like this: Friday night, there’s a meal and a concert; Saturday night, more or less the same thing (different food, different bands, but the same idea); Sunday, a parade in the afternoon and then fireworks at night; and Monday, a bicycle race. Meanwhile, throughout the village there are stands with games for kids and yet more rides and lots of things for sale, including candies and various snacks. The actual dates are August 19, 20, 21 and 22.

As a keen (although not always enthusiastic) observer of the events, I’ve often written about the Sunday parade, and featured a great many photographs. Notably, the parade always has a theme — which in recent years has included the Liberation of France  (which was apparently achieved by the French themselves, with just some modest input from the U.S.) and the world of automobiles.

What about this year? Well, apparently the organizers have really stretched themselves. One of our neighbours, who sits on the village council, suggested  that a sensible theme would have been the world of insects, since Daglan is now decorated with a great many large models of insects, made as part of a school project. To refresh your memory, here’s a photo of a giant praying mantis, featured in my blog posting of July 23: 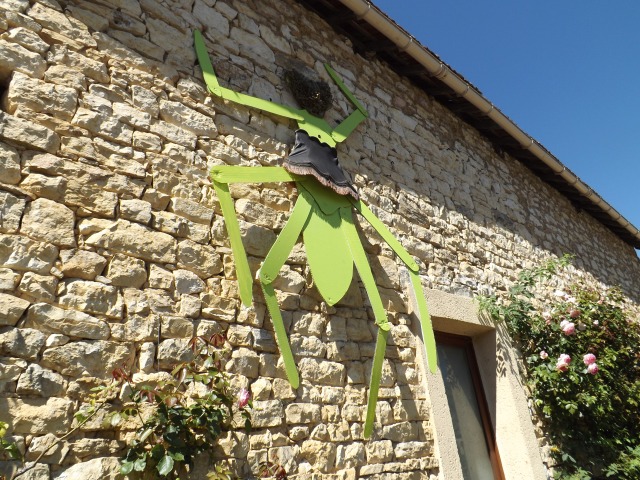 Climbing up a stone wall.

But no, she told my wife Jan and me. It’s to be Civilisation. In French, according to the posters now tacked up around the village, that would be les civilisations. Yes, we’re thinking big.

I can hardly wait to see the variety of floats and costumes that will be paraded through Daglan on Sunday, August 21. One thing is almost certain: There will be a great many men in the parade dressed in drag. (It’s a Daglan-in-August thing.) But I’m sure they’ll be very civilized.