Fabrice le Chef, or Fabrice Lemonnier as he’s more formally known, has reimagined himself, and now Daglan has a new restaurant. Today was opening day; my wife Jan and I were there for lunch; and we left with the feeling that La Cantine, as he’s named it, is going to be a success.

La Cantine is a reworked version of the shop where Chef previously sold meats, cheeses and his own creations, and which evolved into a casual place during the tourist season with meals served on the terrace outside the shop. It’s across the street from the post office, and next to Daglan’s primary school and the mayor’s office. Here’s his shop before the changeover: 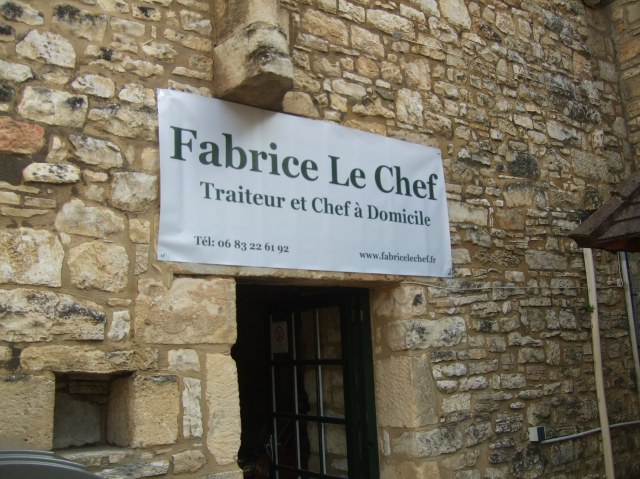 This was the front of the shop, when it first opened.

Now all the food shelves are gone; new tile has been put down; the kitchen equipment has been beefed up; and La Cantine is a cozy and comfortable bistro, with seats for 18 inside. (There are tables on the terrace already, but the weather will need to warm up a bit before it gets much use.)

At today’s inaugural lunch, there were just six of us — and that includes Jan and me. But we think that the quality of food, the price, and the location will bring in lots of diners, especially in the warmer seasons. Here’s a look at a table for four, in one corner of the restaurant: 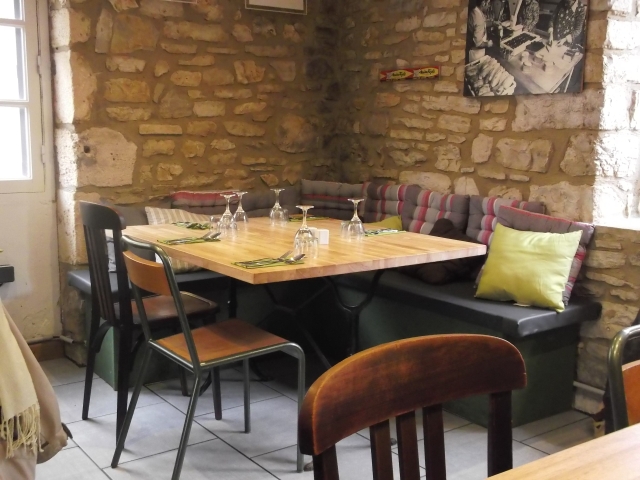 One corner of the cozy restaurant.

The lunch menu includes four courses for 15 euros, bracketed by a soup and a dessert at the beginning and end. In the middle, customers have a choice between two entrées and two main courses. (As it happened, Jan and I had all the dishes between us.)

Before the dishes arrived, we each enjoyed a kir (white wine and cassis), and then ordered a bottle of a very pleasant rosé wine to accompany all the food. Jan declined the soup, thinking that the whole meal would be too much (I think she was right), but I plunged ahead and was served this generous bowl of vegetable soup, topped with sesame seeds and chives:

There was more than enough soup for me.

Jan’s entrée was this large bowl of  moules marinière:

My entrée was a southwest-France twist on the classic quiche — inside the quiche were not only pieces of leek but also shreds of confit de canard. It was served with a small salad of mâche (lamb’s lettuce) and strips of zucchini (courgette), and was really delicious. Here’s my plate:

A local touch — confit de canard in the quiche.

For her plat principal, Jan had the calamari in a piperade sauce (tomatoes, onions, peppers), served with a large helping of saffron rice. Here’s her plate:

Squid in a tomato sauce, with rice.

My main course was this navarin — slow-cooked chunks of lamb, served with a variety of vegetables:

My hearty serving of lamb and vegetables.

Finally Jan and I had dessert — a classic crème brûlée — and then coffees. Here’s dessert: 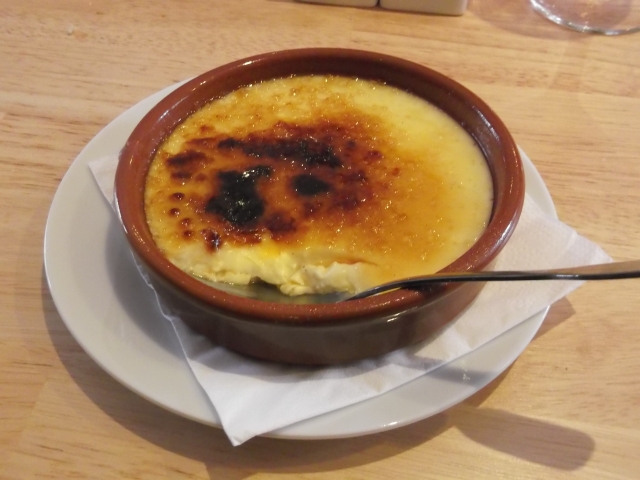 A sweet way to end our lunch.

To begin, Chef plans to stay open for lunch every day, until he decides the best day or days to close for a rest. As for dinner, he’s starting off with servings on Friday and Saturday nights only, but will probably add some dinners as the tourist season starts up.

Our final thought, as Jan and I concluded our meal: We just might make a weekly habit of lunch at La Cantine, every Wednesday after our French classes. Yes, we think it’s that good.

If you want to know more, straight from Chef himself, here’s a link to his website: