This past Wednesday was our day for lunch at the storied restaurant of Paul Bocuse, just north of Lyon, and our visit to l’Auberge du Pont de Collonges turned out to be quite wonderful. As I wrote in Part I of this mini-series, my wife Jan and I had traveled from our village of Daglan by regular train to Toulouse, and then on to Lyon by TGV, for a brief gastronomic holiday to celebrate my birthday.

Jan and I have now eaten in countless Michelin-starred restaurants, mostly in France but also in England. Most often, they have been holders of one or two stars (simply because there are many more of them than restaurants with three stars, the maximum). In any case, we agreed that our lunch at M. Bocuse’s restaurant was our best three-star experience yet. In this post, I’ll focus on the meal itself; in Part III (don’t worry — it will be the last part) I’ll fill in some detail about the chef, his hospitality empire, and the city of Lyon itself.

To get started, here’s the photo of Chef that’s at the entrance to the dining room at Le Royal, the hotel where Jan and I stayed in Lyon (I also showed this in Part I of my Lyon mini-series). As you can surmise, he’s knocking on in years, and in fact is now 90: 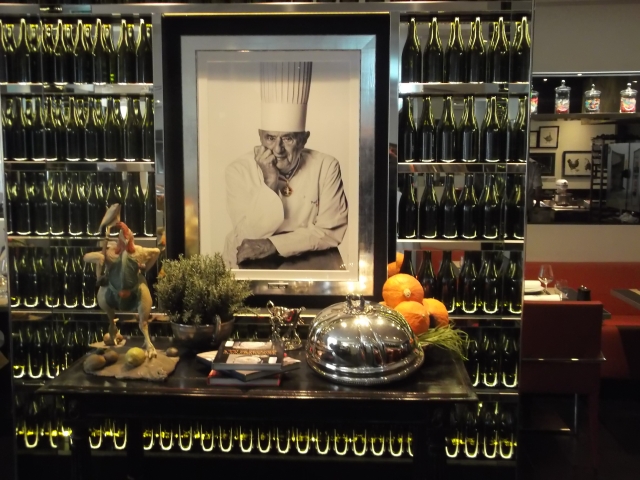 Why, it’s the Chef himself!

After an excellent breakfast in our hotel, Jan and I spent Wednesday morning wandering through the Musée des Beaux-Arts, located on the Place des Terreaux in central Lyon. Then at noon we were met by our taxi for an easy drive through the city of Lyon and up along the Saône River to Collonges-au-Mont-d’Or. It didn’t take much more than 20 minutes, as I recall, and there we were.

Up close to the building, here’s the rather plain sign that’s fixed to the wall where a short set of stairs leads you up to the restaurant entrance: 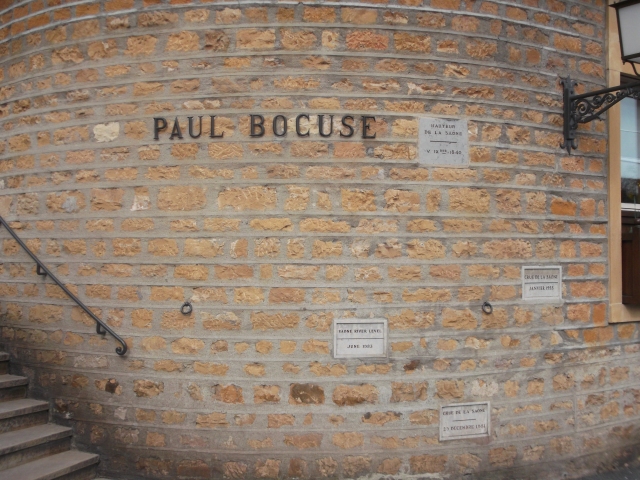 At the short stairway up to the restaurant entrance.

Stand further back, however, and this is the amazing view you get of the restaurant:

It looks pretty garish in the photo, I know, but somehow it seems to work  when you’re there in person. And with the huge PAUL BOCUSE sign on top, it’s pretty clear that you’re in the right spot.

Now for a look inside the restaurant, viewed from our table:

One of the restaurant’s main dining rooms.

So this is, obviously, a restaurant in the classic manner — a mosaic floor, heavy linens on the tables, wallpaper, and lots of framed photos and paintings. Old fashioned, perhaps, but very, very comfortable. The empty table at the left of the photo was later filled by three young men, dressed quite casually, and they seemed as at ease as any of the older guys wearing jackets. (No ties to be seen, other than those worn by the wait staff.)

And now on to the lunch.

Jan and I each had a glass of rosé Champagne while we studied the menu, finally settling on the Menu Classique, at 165 euros per person, plus a bottle of Chateldon sparkling water and a 2012 Pinot Gris “Réserve” by F.E. Trimbach at 95 euros. (This is not a cheap date.)

Getting under way, we were served a modest amuse-bouche — a small but really delicious cup of vichyssoise, with tarragon foam. Mine included a tasty little tuile, but Jan’s did not, as we had alerted the restaurant to her allergy to gluten; throughout the meal, the staff were always sensitive to her gluten allergy, and brought her freshly made gluten-free bread.

And then came the entrées. Ever alert to the possibility of eating lobster, Jan started with the Cassolette de homard à l’armoricaine. I chose the Quenelle de brochet aux écrevisses, sauce Nantua, having fallen in love with pike quenelles when I first had the dish at La Tour d’Argent in Paris. In Paris, my quenelle was served with a wonderful cream sauce and then run under the broiler; the sauce Nantua version, as you can see, is tinted red (probably with tomato paste) and includes crayfish as well as vegetables:

The sauce was the best part of this dish.

The crayfish were perfectly cooked and the sauce was delicious, but the quenelle itself was a disappointment — the only flaw in the whole meal, I thought. Perhaps the fish had been sieved too much, or mixed with too much binder, but in any case the quenelle was sort of spongy and had very little flavour. If I hadn’t known what it was supposed to be, I’m not sure I could have detected any flavour of fish.

For our plat principal, both of us chose the classic Bresse chicken dish, Fricassée de volaille de Bresse à la crème et aux morilles. This was a real hit with Jan and me — beautifully cooked and presented, with lots of morel mushrooms as well as vegetables on the side and truffle slices on top. Here’s my plate:

That’s black truffle on top of the chicken, folks.

By the time the huge selection of cheeses was wheeled up to our table, we were both feeling full, so Jan declined the cheese course — although you can see her hand reaching in to get a taste from the three small samplings I had chosen: 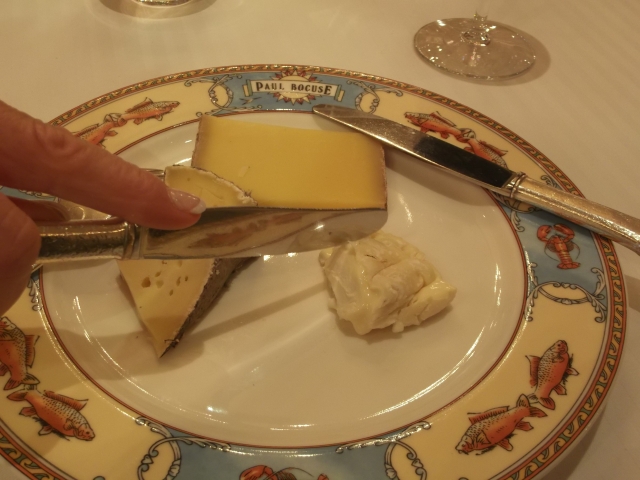 Going in for a bit of cheese.

Got a sweet tooth? This is the selection for you.

As it turned out, I did manage to choose fruit — large, plump raspberries with sauce — while Jan had strawberries. Here’s my serving: 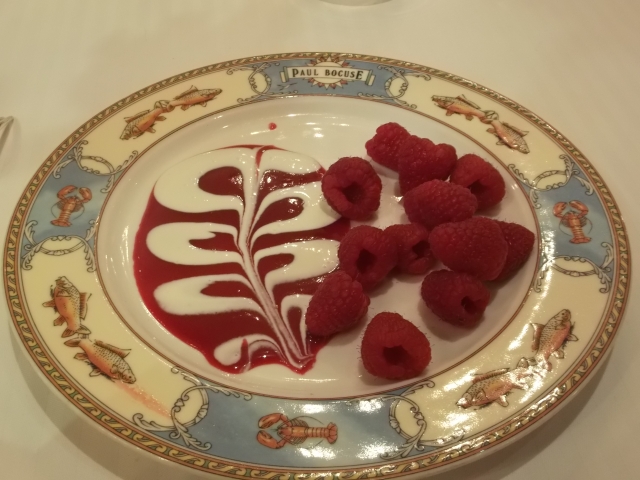 An attractive serving of raspberries.

Bravely, we both passed on the chocolates and petits fours that were offered. Instead, we each had a snifter of Calvados with our coffees. And then we went to the shop at the back of the restaurant, and paid 15 euros for the book My Best, containing a number of Chef’s classic recipes. Then we waited for a taxi at the front, and instead were driven back to our hotel in an unmarked luxury car driven by a man who said he was Paul Bocuse’s personal driver. I can’t guarantee that, but it seemed good at the time.

Final thoughts: No, we never saw Paul Bocuse; yes, Madame Bocuse went from table to table, offering each of us a Bonjour. The whole experience was quite wonderful, and comfortable. Formal, yes; but not stuffy. The service was just right; attentive and polite and friendly, but neither effusive nor intrusive. (Interestingly, every staff member was male, except for a young woman who sat at a desk answering the phone and handling purchases from the shop at the rear.) The food was not what you would call avant-garde by any means, but it was all excellent. Well, the quenelle does need some work.

In Part III: A few more thoughts on Paul Bocuse, his empire, and his home city.