Beynac is one of the most historic and interesting villages in the Greater Daglan Area, or GDA. It’s home to the imposing Château de Beynac, a castle once occupied by none other than Richard Cœur de Lion, or Richard the 1st of England. It’s also home to one of our favourite restaurants, the dependable La Petite Tonnelle. And during the summer, it’s home to some of the worst traffic jams you can imagine.

It’s easy to see the source of the problem — a narrow road that runs along the base of the village, hard against the Dordogne River. Have a look: 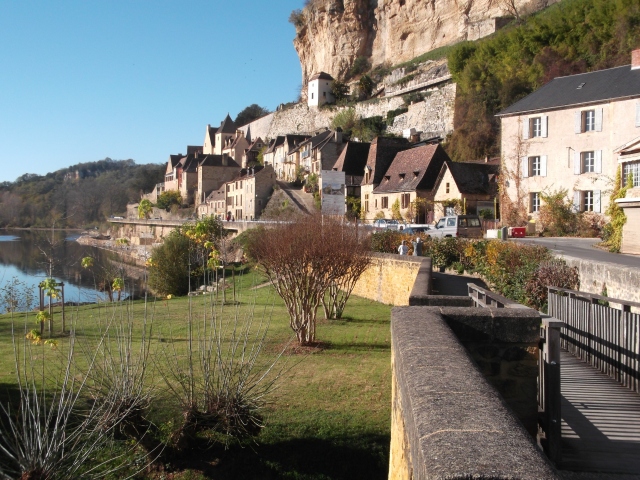 That’s the village up ahead and on the right. The castle is on a cliff above.

The trouble is that it’s not just a local road; it’s an important thoroughfare that heads west to centres like Lalinde and Bergerac, and it carries everything from normal cars to big tractors to large campers to huge trucks. Once all this traffic is joined by the GDA’s horde of tourists in the summer, you have a mess.

If you’re looking for a nerve-wracking experience, try passing a monstrous oil  truck on the Beynac road that’s coming in the opposite direction, edging its way around a huge rock outcropping.

The good news: Beynac is getting the same sort of treatment that has transformed the village of La Roque-Gageac — a significant widening of the road, made possible by building out into the river.

I have written several postings about the major roadworks in La Roque-Gageac, a construction project that lasted a couple of years.  The road was widened; a pedestrian walkway was added on the river’s edge; and the sidewalks along the base of the village were enhanced. To remind you, here’s the finished product, as it looked in May of last year, just as the work was completed:

The road and pedestrian walkway in La Roque-Gageac.

And now in Beynac, the work is well under way, with rock and soil being dumped into the Dordogne, to build out the width of the road. Here’s a look:

You can see the earth and rocks being laid out into the Dordogne.

This sign at the start of the construction site explains that the work will be done in two stages — from September of this year to April 2016, and then from October 2016 to May 2017. So this isn’t a quick fix.

The sign spells out the two stages of work to be done.

The end result, I’m sure, will be worth the effort. But during the construction, driving along the base of Beynac is a bit tense. All heavy traffic has been detoured, as the road has been shrunk to one lane — and a very narrow one at that — in order to allow construction equipment to work along the river. Vehicles are controlled by lights that allow traffic to move in only one direction at a time.

I’ve driven it twice — once in my wife Jan’s smaller car, and once in my normal-sized Volkswagen. Let’s just say that the narrow passageway encourages concentration.

5 Responses to Breaking the Beynac bottleneck