Yesterday (Sunday, November 1) was the holiday known as La Toussaint, or All Saints’ Day, and so chrysanthemums were everywhere.

Okay, not everywhere — but certainly evident in cemeteries throughout the Greater Daglan Area.

Why, you might ask? To explain, this is what I wrote in a Radio Free Daglan posting three years ago, on October 29, 2012:

This is the time of year when the French people pay their respects to the memories of family members and friends who have passed away. They visit cemeteries and lay flowers on the graves of their loved ones. And almost without exception, the flowers they use are chrysanthemums. As a result, chrysanthemum plants are now everywhere. (I was amused by a scrawled sign that I saw a week or so ago, taped to the window of the front door at the supermarket in nearby Cénac, which said “Clients! The chrysanthemums have arrived!” You could tell from the way the sign was scrawled that the clerk had been very, very excited about this development.)

To give you an idea of how all this looks, here’s a view of Daglan’s cemetery late yesterday afternoon: 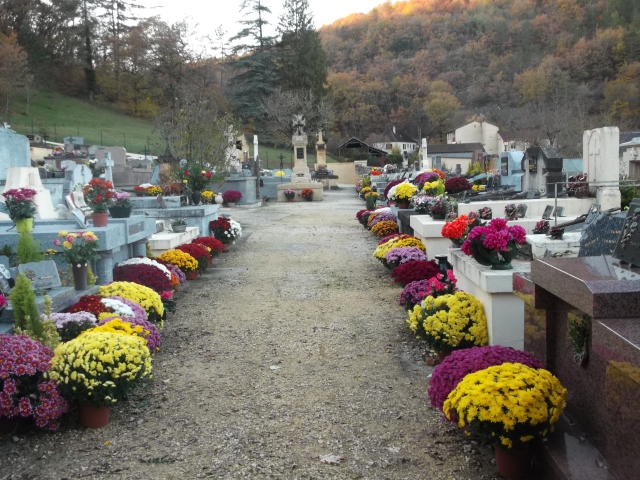 Pots and pots of the flowers decorate the tombs.

A final word on the subject: Don’t ever take a chrysanthemum plant as a gift if you’re invited to a French home for drinks or a meal. The flower has simply become too associated with death.

This entry was posted in Flora and fauna, Holidays in France, Life in southwest France and tagged All Saints' Day in France, Armistice Day, chrysanthemums, Daglan, La Toussaint. Bookmark the permalink.