Wackiness on parade, and the community’s spirit

Apology: So, you’re thinking, why has it taken a whole week just to post something about Daglan’s parade on Sunday, August 23 ? I do apologize, but my excuse is that I had severe technological problems: I simply could not get the WordPress system to upload photos. (And yes, of course I did the usual self-help tricks: synthesized the hard drive; reverse-engineered the soft- and medium-hard disk drives; and re-filtered the densitometer. Also I sent emails to WordPress.) Anyway, things are back to working, so here you go. Apology ends.

You have to hand it to residents of the Greater Daglan Area — despite being a generally quiet and picture-postcard-perfect village, Daglan goes quite wacky during its four-day August fête, which ended last Monday.

In my last post, I gave you a look at one of the features of last Sunday’s parade: A number of men in drag, contributing to the general wackiness of the automobile-themed parade. In today’s post, I’ll show how the community gets into the spirit of the festival.

Let’s start with the character at the head of the parade, Bibendum, better known as the Michelin Man. Here he is, walking ahead of one of the parade entries, which for reasons unknown was belching out red smoke: 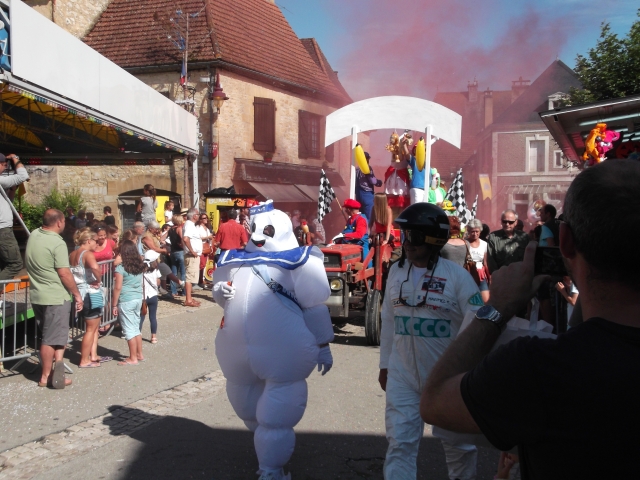 What is particularly interesting about this particular version of the Michelin Man is that inside the costume was none other than Daglan’s Mayor. Here he is again, being friendly with a couple of young visitors from England:

Do they know, or care, that it’s our Mayor inside?

Another good example of community spirit was the effort of the team at Le Thé Vert, the tea room-cum-café in Daglan. Its proprietor, Judith, not only decorated her shop to resemble a service station (remember the parade theme — automobiles) but bought outfits for herself and her servers. Here’s a look at the exterior of the tea room:

And here are the service-station outfits, as worn by Judith (on the right) and one of her friends, who was helping out on a particularly busy day:

People along the parade route — including my wife Jan and me — also got into the spirit of things. For example, I hardly complained at all when the grandson of one of our neighbours, riding on one of the parade vehicles, doused me with water. And pretty much everyone was covered in confetti by the time the parade ended.

Also noteworthy for their community spirit  were the people who were caught up and arrested by the pretend gendarmes — namely, these guys who are shown just about to leap out of their vehicle:

Piling out of the car, to make an arrest.

And here’s one of the onlookers, arrested (all in good fun) and being hustled into the police car: 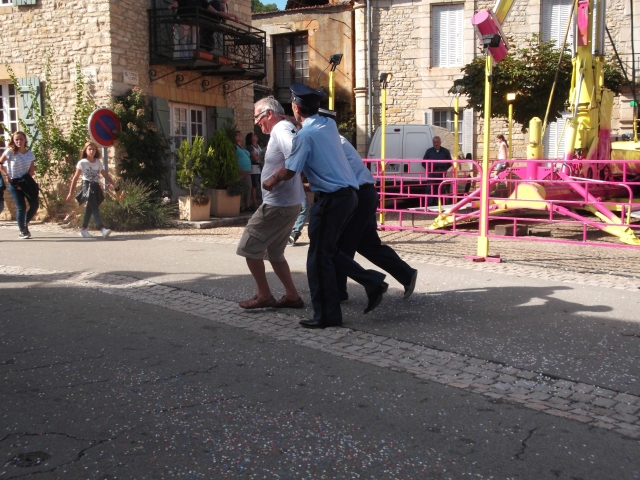 One of the parade viewers is grabbed, taken away, and placed in the gendarmes’ car.

For more wackiness, stay tuned. I’m planning one more post on the Daglan fête, before it becomes a distant memory.

4 Responses to Wackiness on parade, and the community’s spirit