Postcards from the front

Sorry for the delay, but a host of activities — including hosting our friend John from Toronto — has delayed my blogging for a few days. Still, I think it’s worthwhile to go back to last Tuesday,  November 11, and showcase our village’s Armistice Day ceremony. It was a special one.

Jour Armistice is always celebrated solemnly in France, but the holiday carried even more weight this year, because 2014 is the 100th anniversary of the start of World War I. This year, what made Daglan’s ceremony all the more special was the involvement of children from our local school.

The day was just about perfect for the ceremony, because the temperature was cool but not cold, and the sky was overcast. In other words, it’s what you would expect for a November day.

Here’s how it all began, with the school kids lined up in front of the war memorial, and a veteran  leading the procession into place: 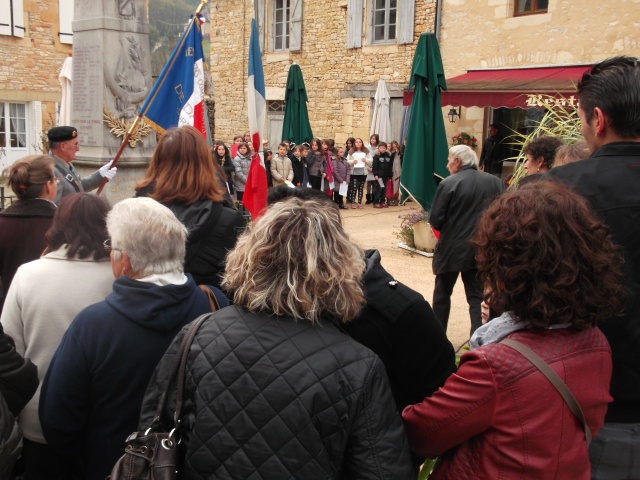 The flag bearer passes before the war memorial, and the school kids.

Each Armistice Day, a prepared speech is read by mayors all across France — outlining the history of the conflict, and what it means for France today. Here is Daglan’s Mayor, Pascal Dussol, reading to the crowd:

The Mayor is followed by a veteran, who reads out the names of the local people who were lost in both World Wars. After each name is read, the crowd murmurs the same words — Mort pour la France, “Died for France.” Here’s the veteran, reading the long list of names: 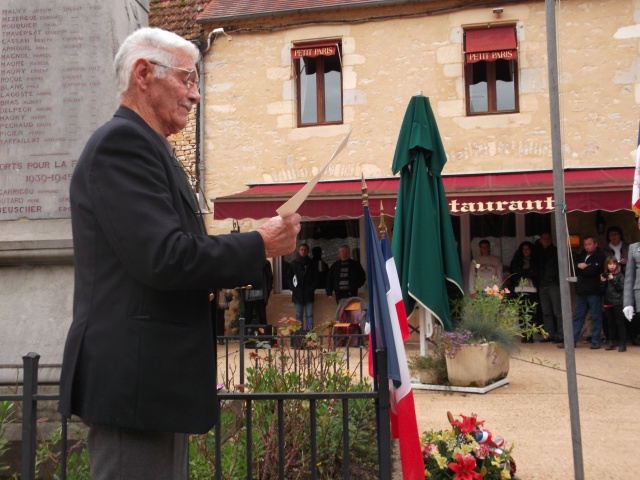 Reading out the names of those “morts pour la France.”

Then it was the children’s turn, and their performances occupied most of the ceremony. They led the crowd in singing France’s national anthem, La Marseillaise, and later performed several other songs. But the highlight was when the children, one by one, took turns reading excerpts from postcards and letters written by soldiers from the area during the Great War. (Fortunately, the organizers had provided a sound system for the kids, so they could be heard pretty well.) Here’s a look at them: 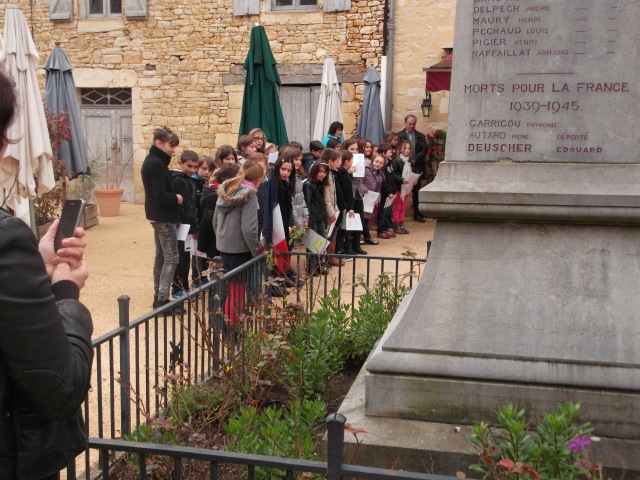 This year, the ceremony started at 10 a.m., instead of the more traditional 11 a.m., to allow time for the children’s participation. At about 10:30, the sun finally broke through the clouds, lighting up the scene like this:

At about noon, my wife Jan, our house guest John, and I joined other friends and neighbours at the salle des fêtes for a community lunch to honour the former soldiers. As always, when there are multiple courses and an unending supply of both white and red wine, the lunch lasted most of the afternoon.

2 Responses to Postcards from the front