The raptors of the château

At the end of September, while our friend Robin was staying with us in Daglan, we enjoyed a great spell of sunny weather. So on Friday, Sept. 26, we took advantage of the sunshine and spent a good part of our morning at one of the area’s best tourist attractions, Château des Milandes, just north of Castelnaud.

This beautiful château, built in 1489, was bought in 1947 by Josephine Baker, the Afro-American dancer and singer who moved to Paris, became famous and wealthy, and played an important role in the Resistance in World War II (among other accomplishments).

My wife Jan and I have toured the castle several times (and recommend it to anyone visiting the Greater Daglan Area), so our friend Robin visited the château by herself. Meanwhile, Jan and I walked to the back of the castle for the raptors show — an interesting and informal presentation of various birds of prey, some European and some from other parts of the world. And what follows is a quick look at what we saw.

We’ll start with the Lapland Owl, shown here with the keeper who led most of the show: 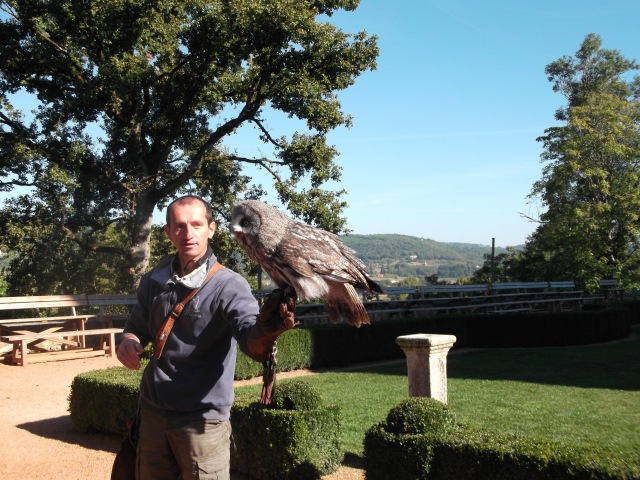 The Lapland Owl meets the audience.

And here’s the owl showing off its flying skills (in return for some fresh chicken meat):

Showing off its flying skills.

A somewhat smaller bird is the Northern White-Faced Owl, shown here fluttering into the audience:

And here he is again, this time sitting on the bleachers just in front of Jan and me:

The owl gets up close and a bit personal.

To demonstrate the flying and hunting skills of falcons, a Lanner Falcon was brought into our area:

Bringing in the Lanner Falcon.

After zooming over our heads quite a few times, the falcon finally caught the piece of chicken that was used as bait, and took it to ground. There it assumed the classic “mantle” pose adopted by falcons to protect the food they’ve caught. Here it is: 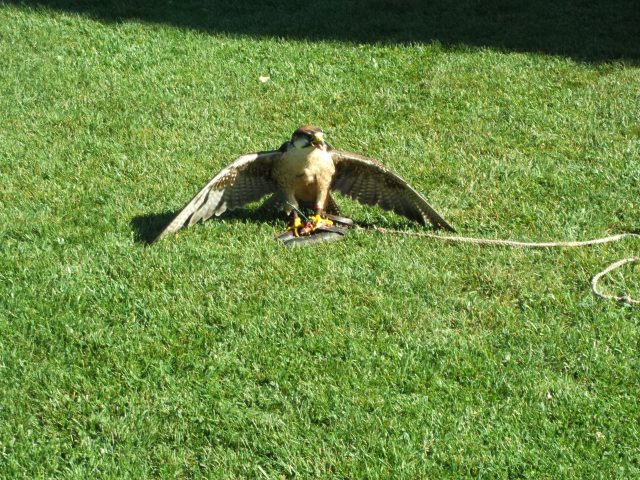 Protecting the food it caught in the air.

Once the show was over, we chatted with one of the keepers for a while (for years, Jan was active in the Canadian Peregrine Foundation, and knows her falcons) and then met up with Robin — who came away highly impressed with the Josephine Baker story. And then the three of us drove up to Sarlat for a superb lunch at the Michelin-starred Le Grand Bleu. But then you knew that, didn’t you? I covered it in “Dish du jour — 5/10/2014.” If you missed that posting, have a look.

8 Responses to The raptors of the château