Thanks to movies and various publications, you probably have a pretty good idea of what a French café, a French restaurant, and a French château look like, even if you’ve never visited France.

But you may not have much sense of what I consider to be particularly strange places — this country’s drugstores, or pharmacies.

In fact, when I enter one, I almost imagine that I can hear the smooth, deep voice of Rod Serling, the host and narrator of that great early-1960s television show in North America, “The Twilight Zone.”

As a young teenager, watching on our family’s television in Florida, I would shiver as I heard him introducing the program, knowing that we would soon be taken into a strange world where odd — and often scary — things would happen. This was Serling:

“You’re traveling through another dimension. A dimension not only of sight and sound but of mind. A journey into a wondrous land whose boundaries are that of imagination. That’s a signpost up ahead: your next stop: the Twilight Zone!”

Now French pharmacies are hardly scary. But for me they are like a virtual Twilight Zone of lotions and potions and notions, with costly beauty products galore, big gaps in their product offerings, and an odd approach to staffing (among other things).

I will admit that I’m approaching this with two biases: One is that I’m male, and so I’m not particularly enchanted by lotions and creams in the first place; second is that I’m used to how things are done in North American (both Canadian and U.S.) drugstores. So if your experience is only with European pharmacies, some of my comments and observations may seem odd. But so be it.

To start off, let’s get oriented. Like pharmacies in other parts of Europe, French drugstores are identified by green illuminated signs in the shape of crosses. This strikes me as a good idea, worth copying in North America, because the signs help you locate a drugstore if you’re new to an area.

For the really large pharmacies (like the Lagoubie drugstore which we frequent in Sarlat), there are several such signs, and a number of them include flashing lights plus extra information such as the day, the time and the temperature. Here’s one sign: 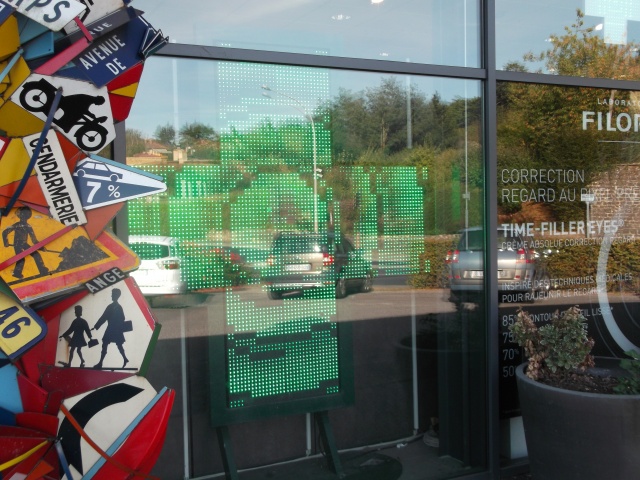 A large green cross shines out from the pharmacy window.

Here’s another view of the same sign, a few seconds later, showing the date (it’s referring to the 16th day of the 9th month): 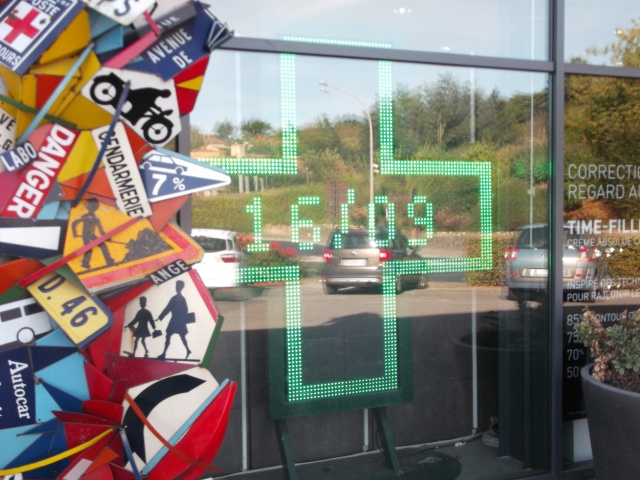 Once inside a pharmacy, it seems as if you’ve entered a hallowed Hall of Beauty and Well Being. You’re confronted by shelf after shelf of creams, lotions, wrinkle-inhibitors, ointments, salves,  perfumes, soaps and just about anything else that you could smear or squirt on your skin. Here’s one look at the set-up in Sarlat’s Lagoubie pharmacy: 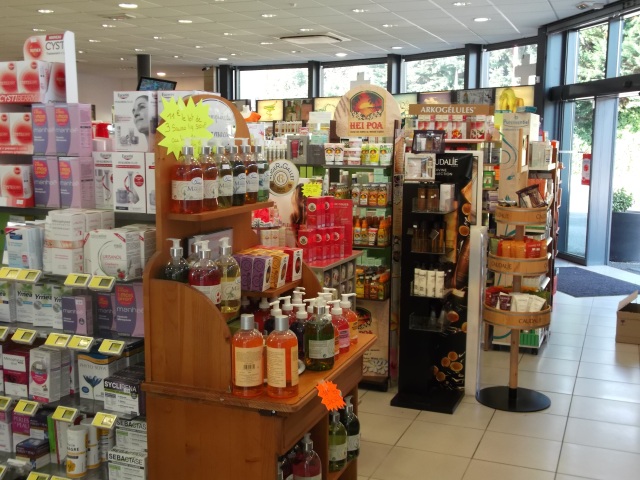 An amazing array of products.

Here’s another look at the range of products facing a shopper: 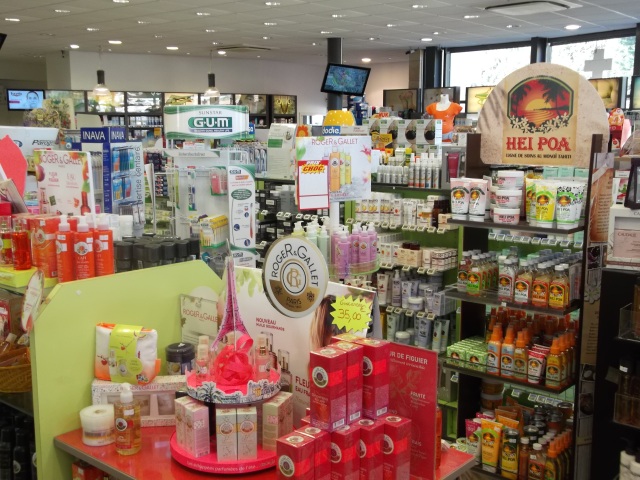 Yet more lotions and potions.

And finally, here’s a view of yet another typical product shelf: 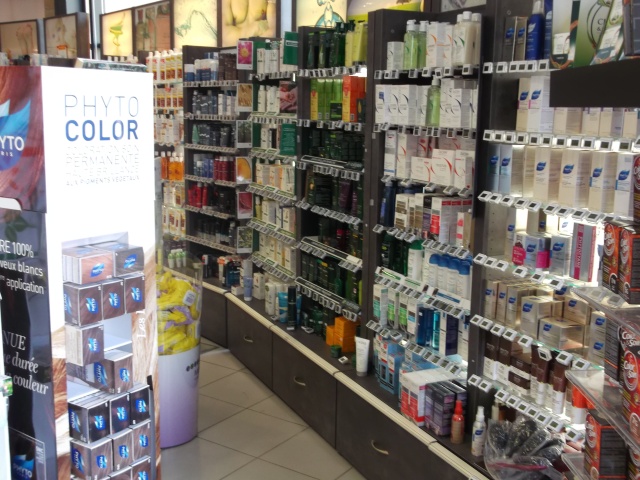 Row upon row of lotions and potions.

I suppose that what I find most amazing is this apparent French love of “magical” lotions and creams — anti-wrinkle, anti-aging, anti-spots, anti-stretch marks, and so on. And not only does price seem no object, it often appears that prices are set at outrageously high levels as some sort of badge of quality and effectiveness.

But there are several other peculiarities, at least in my view. Among them:

The staffing. In North American pharmacies, it’s easy to tell the role of a staff member. Behind the counter where prescriptions are dispensed, you’ll find a registered pharmacist, who can offer reasonable medical advice. Other staff members may assist you, or stock shelves, or operate the cash registers, but typically don’t give advice. Not so in French pharmacies, where it seems that anyone behind the counter can (a) wear a white coat and (b) fill prescriptions and (c) offer medical opinions.

The advice. Sometimes the advice is less than brilliant. One of our friends with a holiday home in Daglan went to a pharmacy for a sore throat, loud cough, and a high temperature; she was told she had an allergy and was given some pills. Unfortunately, she continued to get worse, and when she went to her doctor back in England, she was told that she actually had severe bronchitis and was put on a heavy course of antibiotics. Recently I re-filled a regular prescription for blood pressure medication, which included the line that I should take two 20-milligram pills of the drug per day; the fellow at the pharmacy in Cénac brought out two boxes of 10-millgram pills. When I pointed out that the prescription clearly said 20-milligram pills, he argued that two 10-milligram pills amounted to 20 milligrams. After a bit more arguing, he finally saw the light and brought the right pills. (My motto at the pharmacy now: Ever Vigilant.)

The pricing. Competition in business does not seem to be a terribly French tradition, and so prices are often wildly out of hand — apparently because pharmacies don’t feel the need to reduce prices to attract customers. What we’ve learned from several years of living here is that if there are products that you buy fairly regularly — whether it’s a headache pill like Advil or a skin cream like Dexeryl — it really pays to check their prices at several drugstores. The price differences can be astounding. (It’s also worth noting that pharmacies seem to have a stranglehold on virtually all medicines, so that you can’t find simple over-the-counter medications like headache pills or cough syrup in convenience stores or supermarkets, which would make life easier — and products less expensive.)

Prescriptions and packaging. In Canada, when you fill a prescription, your pharmacist deciphers your doctor’s (probably awful) handwriting; you then receive a plastic vial with the exact number of pills your doctor prescribed, with an easy-to-read descriptive label, printed clearly with the name of the drug, the date prescribed, the recommended dosage, and so on. In France, the pharmacist simply hands back to you the original prescription (in your doctor’s awful handwriting), and one or more boxes of pills that are almost always encased in little plastic bubbles, so that you have to pop them out, one by one.

Looking for a positive way to end this bit of a rant, I will say that I think my thumbs have become stronger over the past few years, because of popping out pills. Well — it’s something.

4 Responses to Lotions and potions and notions: Oh my!