If you’re a member of a royal family, or you’re a world famous rock star, or you’re simply a very rich person, you may stop reading now.

You have no special need to learn about Epicure, the restaurant bearing three Michelin stars that’s located in Le Bristol Paris, the  hotel on rue du Faubourg Saint Honoré. No doubt you receive Epicure-style treatment all the time.

But suppose you’re not in one of those categories, and you’d like to experience the kind of service and attention that the royals and the rock stars and the rich receive regularly — then Epicure could be for you.

My wife Jan and I treated ourselves to a Sunday lunch at Epicure just one week ago, during the trip to Paris and Normandy that I’ve been describing over the past several postings. The food was excellent, the surroundings beautiful, and the service — well, if one could possibly imagine a higher level of service, it would have to include being carried to our table in sedan chairs. At each step, we were accompanied by uniformed serving staff, gently welcoming and guiding us, and then introducing us to the next station on our journey to culinary heaven. As for serving staff at our table, including the sommelier and the maitre d‘, I lost count.

Jan and I began with a glass of Champagne in the garden courtyard at the centre of Le Bristol. The day was sunny and pleasant, and the Champagne just fine. After half an hour or so, we were directed to our table in the main dining room, where we looked out at the garden we had just left. Here it is: 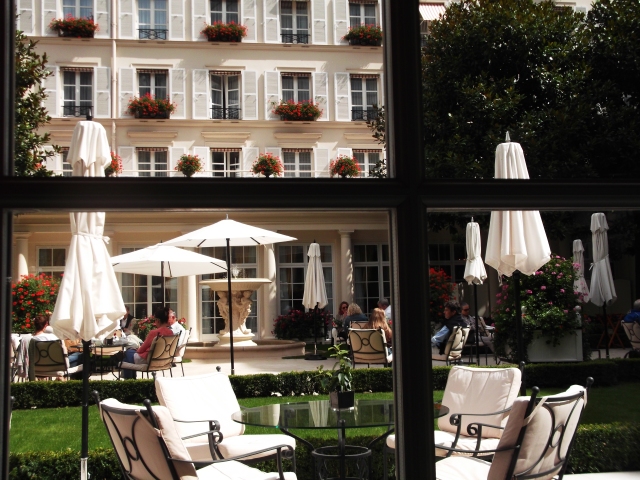 The courtyard garden at the Bristol, as seen from our table.

Confronting the menu was, frankly, a bit of a daunting experience, even for a couple of foodies who have eaten many times at Michelin-starred restaurants, including a couple with the top level of three stars. Prices are high (for example, the least expensive glass of Champagne costs 25 euros), so selecting items à la carte would be a good way to commit financial suicide. Instead, we chose the seasonal menu, which includes an entrée, a main course, a cheese course, and desserts. It goes for 135 euros. (Meanwhile, a main course of turbot alone, if chosen à la carte, would set you back 110 euros.)

For our lunch, the amuse-bouche included a clever little ball of a whipped confection — possibly salmon-based? — perched on a stick and studded with tiny bits of what I figured must be nori, the Japanese seaweed. Whatever it was, it was delicious as well as visually appealing. Here’s my plate:

For my entrée, I ordered a dish that was described as tzatziki— the Greek sauce of yoghurt and cucumbers. Of course, my dish bore no comparison to the traditional recipe, and was incredibly refreshing. The menu says it includes “homemade curdled cow’s milk, lemon and olive oil, grated cucumber and frost of fresh mint.”

Jan’s entrée was this marvelous dish of three different kinds of heirloom tomatoes and creamy burrata cheese, which she thought was superb:

Now this is what you call a serious tomato salad.

For our plat principal, Jan and I both chose the blue lobster — poached and served as part of  a sort of deconstructed Caesar salad:

Blue lobster, on a special plate.

As a palate cleanser, we each received this small but wonderful dish of citrus sorbet, orange sections and a dark-fruit jelly, with a small baton of what seemed to be flavoured meringue: 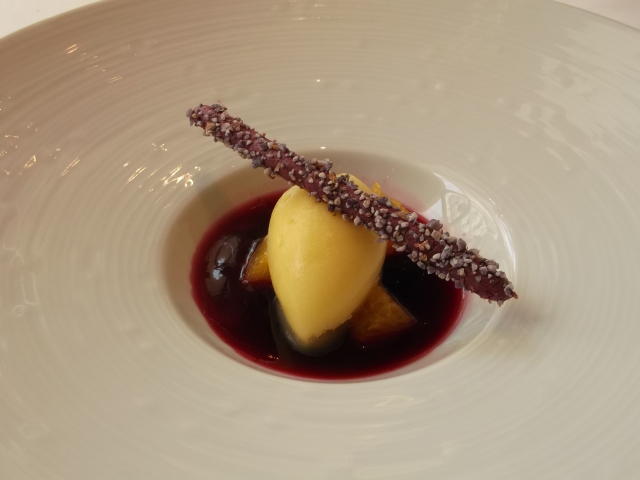 A series of fresh, surprising tastes.

By the time we reached the fromage course, our appetites were flagging, so we each chose miniscule portions of cheese. And then it was on to our desserts, which included these delicate spoons of jelly filled with an intense strawberry mixture, and topped with flecks of gold leaf:

For each of us, a spoonful of intense strawberry flavour.

Jan’s main dessert was this amusing plate of apricots sitting in a pool of almond custard with finely chopped almonds, looking for all the world like a plate of eggs cooked sunny side up:

Sadly, the photo of my dessert was not in focus, and so it’s not worth showing. But the dessert itself was absolutely superb — a thin base of cake, topped with an intense sauce of blueberries, and coated with a rich layer of chocolate ganache.

And with that, a few final comments on our meal at Epicure:

The three stars. Epicure is a place that, at least in my view, has fully earned its three Michelin stars, for the quality and inventiveness of its food; the beauty of the surroundings; and the level of service it provides.

The staff. Head Chef of Epicure is Eric Frechon, and the Pastry Chef is Laurent Jeannin. Obviously they are excellent. All the anonymous staff who served us were inevitably pleasant and helpful, to a fault. At times the level of service was just a bit over the top, with one server in particular apologizing profusely for the most minor of slips.

Thoughtfulness. As I’ve written before, Jan is allergic to gluten, and we always make a point of noting her allergy when making a reservation. At Epicure, this was taken into account completely, and throughout the meal the servers continued to bring Jan pieces of fresh, hot gluten-free baguette.

Value. I realize that for many people, even those who are comfortable financially, paying 25 euros for a single glass of Champagne and 135 euros for a single meal (excluding wine and any other extras) simply doesn’t make sense. But for us, it happens to be the kind of extravagance we enjoy, just as others pay large sums to play golf or sail their boats. Obviously it’s not an everyday event, but a  memorable meal at a place like Epicure is a real treat.

Comparisons. I’d say that overall, this was the best experience we’ve ever had at a three-star restaurant. However, I’d also say that the food itself was not really any better than what we’ve eaten at Le Vieux Logis in Trémolat, or Le Grand Bleu in Sarlat, both of which are in the Greater Daglan Area, and both of which have just one Michelin star. What pushes Epicure into the top, three-star range are its opulent surroundings and its level of staffing and service.

A final note on the food during our trip. While the meal at Epicure was the obvious culinary highlight of our four-day trip to Paris and Normandy, we did eat awfully well on all four days. Among the highlights: the veal kidneys in mustard sauce that I had for lunch on Friday, when we were with my sister Karen and her husband Mark; the cheeseburgers, lobster rolls and crab salads at Le Tourville on Place de l’Ecole-Militaire; and the pasta at Romantica Caffé. And finally, I have to pay a special homage to the dozen oysters I had as a light lunch on Saturday at Le Carlotta in Caen. They were wonderfully fresh-tasting, with almost no hint of brine, and they were served quite properly, as you’ll see here:

A dozen oysters served at Le Carlotta in Caen.

At Le Carlotta, the Champagne was a mere 11 euros a glass, and the dozen huitres cost just 24 euros. What a deal!