No, you probably didn’t spot us on the televised coverage of yesterday’s Stage 19 of the 2014 Tour de France. But there we were, huddled under umbrellas in pouring rain, listening to the rumbles of thunder, hoping that a lightning bolt wouldn’t land anywhere near us, and waiting anxiously for those few minutes of excitement as the riders flash past.

This was the third time that my wife Jan and I had watched a Stage of the Tour de France in person; our first Tour was in 2011, in Figeac, while our Tour No. 2 was in 2012 in Pont de Rhodes. (In 2013, the route of the Tour never came near us.) Yesterday’s Stage was a fairly flat but long run (208.5 kilometres) from the Haute-Pyrénées north into Bergerac, one of the most prominent towns in our département of the Dordogne.

This year, we were with good friends Suzanne and Mark. And yesterday, just before noon, we packed their car with a picnic and Mark drove us out of Daglan under grey and threatening skies.

We were hoping against hope that the weather forecasters would be wrong. Our plan was to duplicate our 2012 Pont de Rhodes experience — find a quiet stretch of road on the Tour route, enjoy our picnic, and then watch the Tour fly past. But the forecasters weren’t wrong, and in fact during parts of our drive the rain was simply torrential. As well, the various detours imposed by the Tour made it difficult to find that perfect spot in the country.

So we wound up, not on a country road, but more or less in the centre of Miramont-de-Guyenne, a town in the département of Lot-et-Garonne, just south of the Dordogne. The town is about 80 kilometres west and somewhat south of our village of Daglan, and about 47 kilometres south of the Stage’s finish in Bergerac.

We did find a small area of grass and flowers at an intersection where the Tour riders would have to make a sharp left turn, and because the rain had stopped, we decided to plunk down and have our picnic. (Many smiling passers-by did say “Bon appétit!” to us.)  Here’s our picnic, being set up:

Our Tour de France picnic is being arranged on a blanket.

We were pretty much finished eating when the Caravan arrived — that massive string of vehicles that leads every Tour de France, promoting everything from bottled water to soap, from bakeries to supermarkets. It’s an immensely popular part of the Tour, because most of the vehicles carry staff who throw goodies to the crowd. Naturally, one of the most popular with children are the vehicles from candy-maker Haribo, like this one:

The huge supermarket group Carrefour is a major sponsor of the Tour, and it entered several vehicles in the Caravan. Here’s one of them:

The Carrefour supermarket group is a major Tour supporter.

In the next photo, you’ll see a fairly goofy looking guy promoting the Teisseire line of fruit-based syrups and drinks. Here he’s tossing samples of the Teisseire Zéro line of calorie-free drinks to the crowd:

The guy in the swing was tossing samples to the crowd.

To give you one final taste of the Caravan (and it’s only a small taste), here’s one of the vehicles promoting McCain, the Canadian potato-processing giant that has a large presence in French supermarkets, with everything from frozen French fries to potato chips:

This tractor was just one of the McCain vehicles in the Caravan.

As you can see from the photos so far, we were still rain-free, although the skies were definitely threatening. Unfortunately, there was a fairly long wait until the racing cyclists arrived — and when the storm clouds rolled into Miramont-de-Guyenne, there were umbrellas everywhere. Despite the rain, the spectators stayed in place.

Finally, just as we were all pretty much soaked (despite the umbrellas), the motorcycles heralding the first rider showed up, and then the leading cyclist swept into view. Here he is, wearing a red jersey and just starting to make the turn to his left: 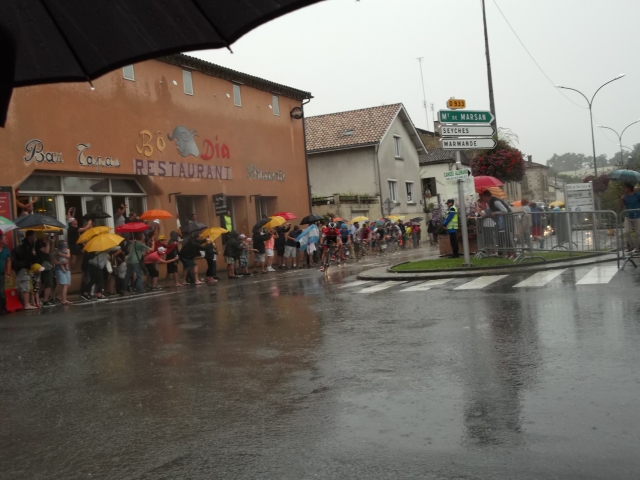 There he is — the leading rider!

Close behind him came two more riders, and here they are:

Two more riders make the turn in front of us.

Behind these “breakaway” riders came the main group of the Tour, called the peloton. If you look carefully at this next photo, you can see the Tour’s overall leader, Sicily’s own Vincenzo Nibali. He is the rider fifth from the right, partly hidden by another rider, but visible because he’s wearing the yellow jersey of the Tour leader: 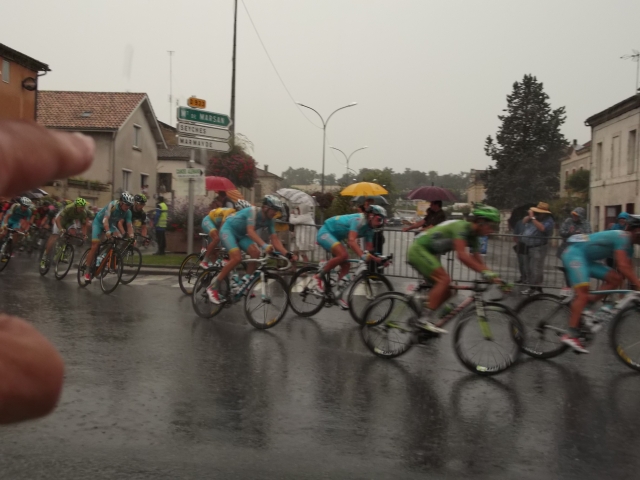 Look for the rider in the yellow jersey.

Here’s my final shot of the riders, passing in a blur:

More riders in the pouring rain.

It didn’t take long for all the riders to pass. Then came the rest of the vehicles, including lots of motorcycles and trucks carrying various supplies. For Suzanne, Mark, Jan and me, it was time to pack up and carry our belongings back to the car. All four of us were soaked, and our feet were squishing in our shoes, but we agreed that the excitement of seeing the Tour de France up close and personal was worth the discomfort.

On the way back, Suzanne took the wheel and, despite a couple more detours caused by the Tour, we eventually reached the main road that runs east from Bergerac towards home. However, that’s not quite the end of the story.

As we neared the town of Lalinde, I suggested that we stop for coffee at a café that Jan and I like. Then I went further and suggested that we might have some dessert with that coffee, as we had never tackled the fruit salad that Jan had made for the picnic.

And sure enough — we had some beautiful desserts, like this serving of rhubarb-strawberry pie:

A nice way to forget being wet.

Once we reached home that evening and changed out of our wet clothes, Jan and I did watch the one-hour highlights program of the Tour, and found that none of the action in Miramont-de-Guyenne was televised. Still, we had our own good memories.