We are in the thick of Overload Season — that two-month period when tourists pour into the Greater Daglan Area, far-off friends come to visit, and people with holiday homes in the GDA arrive to spend a week or two or more. Over the past weekend, my wife Jan and I were in top-speed socializing mode, but today gave us a breather.

In case you’d forgotten, today is July 14, which is France’s national holiday, often called Bastille Day. Last year, we celebrated the occasion with a trip to Paris, which I described in “Bastille Day, Paris: morning, noon and night” (July 18, 2013).

One of the highlights of that trip was watching the Eiffel Tower being illuminated by a massive, and very long, fireworks exhibit. Here’s just one of the photos I posted at the time:

Today in Daglan, things were busy enough at the start. First we noticed that our main village square was clogged with fire trucks, and thought that they might have assembled for some sort of Bastille Day parade. Here are just some of the vehicles in the square, along with a group of firemen and a firewoman: 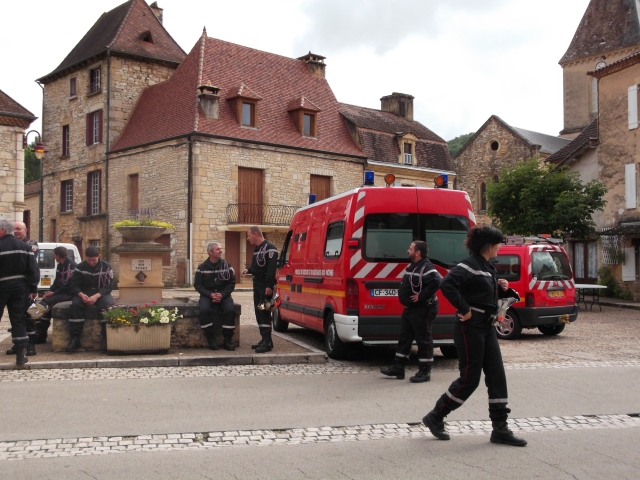 They’ve taken over the square.

Later they all came down into our area, Place de la Fontaine, where we saw that they were all being photographed for next year’s calendar.

As for Bastille Day celebrations, our Mayor led a tasteful ceremony at the war memorial in front of the Le Petit Paris restaurant. It began with a slow march of the village’s council members from the Mairie to the war memorial, led by a veteran. 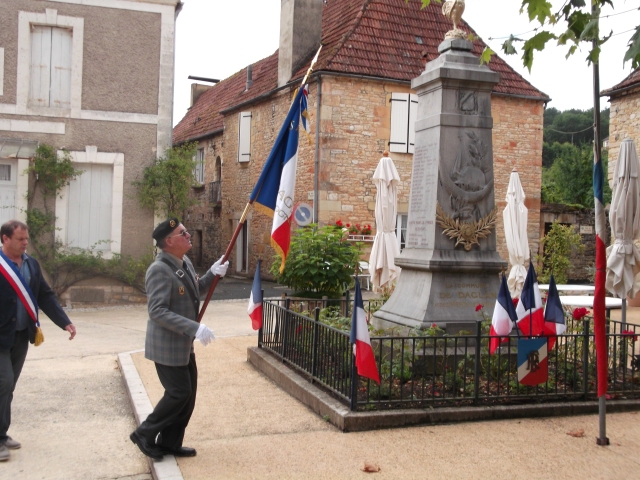 Once everyone was in place, the flag of France was raised. Here it goes:

The flag of France is raised over Daglan.

Then our Mayor read a fairly lengthy speech about the meaning of the day, and what France stands for. This was followed by La Marseillaise on a CD player, after which we all headed back to the main square (by then devoid of firepersons) for complimentary glasses of wine and some nibblies like peanuts, potato chips and small squares of pizza. Here’s the ceremony, with Monsieur le Maire reading:

Now by this point, two of our good friends from Toronto, Rob and Darlene, had left our home to spend a couple of days with relatives near Bergerac. And so for the rest of today, Jan and I were happy to have quiet time — having spent the entire weekend socializing with Rob and Darlene, as well as many other friends who either have nearby holiday homes or live in the GDA. Among our activities:

A burst of fireworks, seen over the house of a neighbour.

Another burst of light — and sound.

And finally, one more photo: 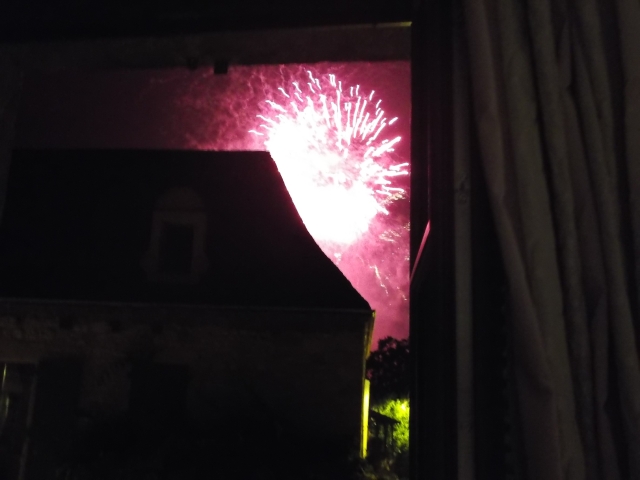 Tonight our plan is to watch television: just the two of us. But then, tomorrow, the socializing begins again. As I wrote at the beginning of this posting, it’s Overload Season in the Greater Daglan Area. And ya’ gotta’ love it.

2 Responses to A Bastille Day breather