My wife Jan and I knew that we were in for a tiring morning yesterday (Tuesday), but we were buoyed by the fact that we could look forward to relaxing over a very long lunch. And that’s exactly what we enjoyed — with some delicious and seriously hearty fare in the centre of Toulouse, France’s fourth city (behind Lyon, ahead of Nice).

Before we get to the hearty fare, I’ll begin with our schedule and the reason for our trip to Toulouse in the first place — a follow-up meeting with the surgeon who performed back surgery on me in April. The schedule?

Here’s where it gets amazing, with full marks to the French medical system. At just about 9 a.m., we registered  in the clinic’s X-ray department. Then I was called for a series of X-rays. Then we waited for the X-rays to be developed. Then we took them to the surgeon, who gave me a thorough exam, reviewed the films, and said he was pleased with my progress. Then we finished up paperwork with his secretary, and received the order for new X-rays and another progress meeting in October. Total elapsed time? Exactly an hour! How often do you find that kind of efficiency at your medical appointments?

In any case, at 10 a.m. we were out in the street, waiting for a taxi to take us to Place du Capitole, a massive pedestrian area in the heart of the city, dominated by the huge Capitolium, seat of municipal government and also the home of  an opera company and symphony orchestra.  Then there’s the added attraction of lots of shops, cafés and restaurants around the square.

Taking advantage of the shops around the square, Jan bought several new pieces of clothing so quickly that we had time to relax with some classic French drinks, Champagne for her and Perrier for me. Here’s a close-up of our table at Les Tenors, a café right on the square:

A couple of quintessential French drinks.

Even after dawdling over the drinks, we had time to wander through a market that was set up in Place du Capitole before finding a restaurant for lunch. Jan was excited to see one stall with a sign offering several types of gluten-free bread, only to learn that the vendor had sold out of the gluten-free loaves. But the vendor’s supply of other breads looked good enough to eat:

Breads on offer at a stall in the Toulouse market.

And here’s the bread lady, bagging some rolls and other breads for her line-up of customers:

A vendor picks out breads for a customer in Toulouse.

Here’s another look at the market, with a fruit stand in the foreground:

Fruits on offer in the market.

At this point, the time was creeping around towards noon, and so Jan and I headed across the square to the Grand Hotel de l’Opéra, where we had seen a promising restaurant at street level (at the far left side of the building in this photograph). 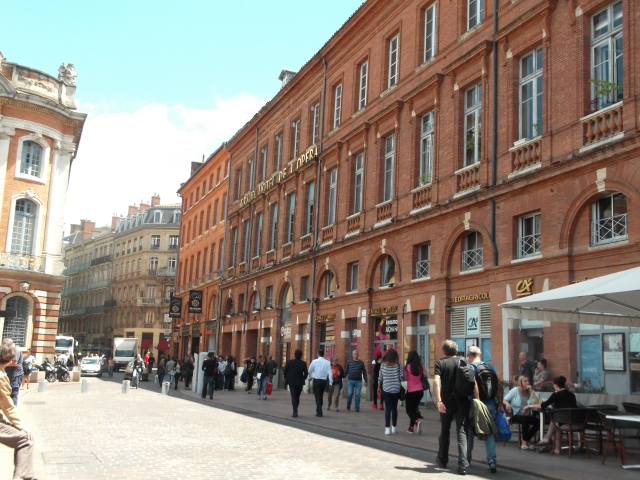 Our restaurant is at the far left of the large hotel.

It turned out to be a traditional brasserie, Le Grand Café l’Opéra, and it looked inviting. So in we went, precisely at noon. Since we figured we wouldn’t have to depart for the train station until 2 p.m., we settled into our table, ordered a coupe de Champagne each, and took our time considering the menu.

I decided to focus on some hearty and traditional French dishes, beginning with snails, moving on to cassoulet, and closing with a cheese plate.

Jan also chose les escargots de Bourgogne as her entrée, but selected a risotto special (with large shrimp) as her plat principal, with no cheese or dessert.

Considering how different our choices for the main courses were, we opted for a half bottle of white wine for Jan, and half a bottle of a 2010 Madiran (Laffitte-Teston) for me. (Wine note: Madiran wines, from Gascony in southwest France, are not awfully well known. We first heard of them almost 16 years ago at Juveniles, one of the original wine bars of Paris. The place is run by a true original — Tim Johnston, who was born in Scotland but knows Paris like the back of his hand. We first met Tim in 1998, when we were headed down to the Greater Daglan Area on our life-changing bicycle trip, and among other things he recommended that we try Madiran wines. The wine is made primarily from Tannat grapes, and I’ve often found it much too tannic. But this 2010 was truly wonderful with my meal — rich and deep and flavourful.)

Now to the food. Here’s my serving of snails, deliciously buttery with a nice (not excessive) amount of garlic:

Six large snails for each of us, to begin.

Naturally, I soaked up very bit of buttery sauce with one of the rolls I was served. Next came my huge portion of cassoulet, that southwestern French concoction of white beans, tomatoes, garlic, carrots, and chunks of meat — typically confit de canard (duck legs slow-cooked in duck fat) and Toulouse sausage. Here’s my serving, of which I ate almost all:

My huge and hearty serving of cassoulet.

At the end of the meal, I had this plate of five French cheeses, of which my favourites were the blue, the chevre in the centre, and the old Cantal at the top right of the plate:

After an espresso, Jan and I headed back into Place du Capitole to get a taxi for the ride back to the train station, and then the train trip back to Gourdon.

If you’re wondering, the total for the lunch came to 151 euros, which is not exactly a cheap date, but seemed like good value (unlike the 95-euro lunch  at Les Prés Gaillardou that I described in my posting of July 1).

And after all that food at lunch, what did we have for dinner last evening? Not very much.