Polishing up our V-E Day ceremony

Yesterday was May 8th, or huit mai in French, and it’s a national holiday — marking Victory-in-Europe Day on May 8, 1945. Once again, our village of Daglan marked the day with a ceremony at the war memorial, right in front of the restaurant Le Petit Paris.

This was the first real chance for Daglan’s newly elected municipal officials to show their stuff, and according to my wife Jan, they acquitted themselves well. (I couldn’t attend, you may have guessed, because I remain in La Roseraie, the clinic in Montfaucon where I am recovering from back surgery.) In any case, Jan reports that everything went without a hitch, and the ceremony seems to have been polished up. Here’s a look at the event, through her photos.

Before things began, a lovely flower arrangement had been placed at the foot of the war memorial, along with the requisite French flags and (for the first time  that we can remember) a flag of Europe. 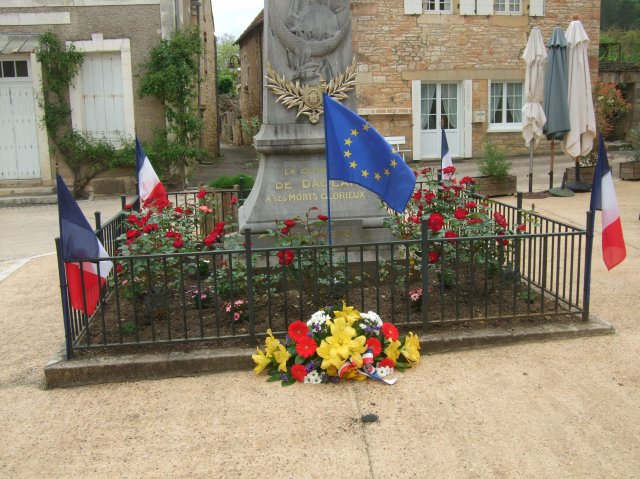 Flowers in front of the war memorial.

Over in the village’s main square, a table had been set up to hold the refreshments (snacks and drinks) that would be served after the ceremony. To our knowledge, this was also a first, as the drinkies previously were served either in a bar at the end of the village, or in the community hall. Since it was a reasonably nice day, why not? 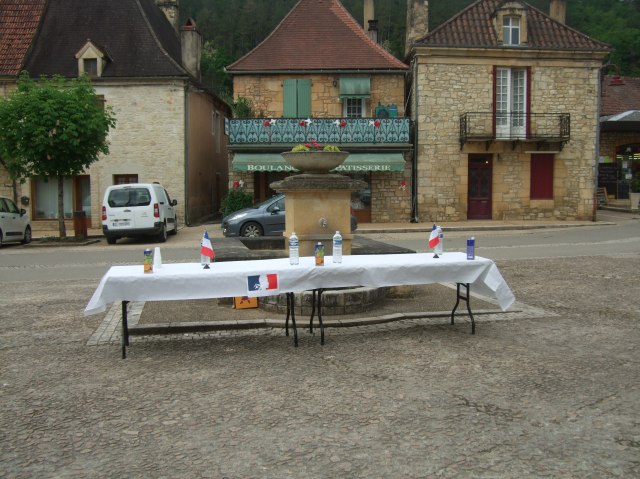 A table is set up to hold the drinks, for later on.

Once everyone had gathered for the ceremony, it began with a trumpeter playing the Last Post, followed by the speeches. Here in the front row are the three adjoints, or deputy mayors, who wear the official sashes:

Officials line up for the ceremony.

And then our new Mayor reads the official speech, remembering the events that led to the eventual victory over Nazi Germany: 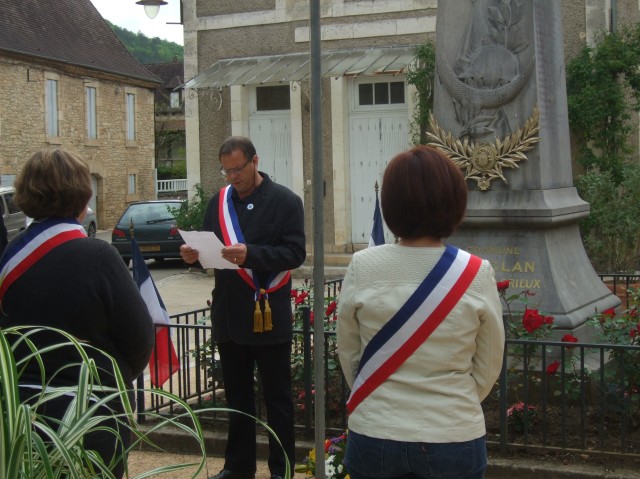 Next comes the singing of the French national anthem, La Marseillaise, and then the migration to the main square for the refreshments:

Snacks and drinks served in the village’s main square.

It’s a simple but meaningful ceremony, and this year it was definitely polished up, for the simple reason that nothing went wrong. In previous years, there was always some sort of problem, from the flagpole pulley breaking so that the flag fell to the ground, to the fact that the CD player (meant for the national anthem) didn’t work. This year, the trumpeter played the anthem, and Jan reports that he did very well.

2 Responses to Polishing up our V-E Day ceremony