The people have spoken: Daglan’s election

Like so many things in our village, politics bubbles along beneath the surface, generally hidden from public view. There are whispers, private meetings, nods and winks.

But yesterday, for our municipal elections, the people spoke out clearly and dramatically. It was, at least in Daglan terms, an avalanche of votes. And the result was a rout.

To see what I mean about politics lying beneath the surface here (unlike the municipal elections I’m familiar with in Canada), have a look at how the two 15-member  lists of candidates for election were promoted. This photo shows a stretch of Daglan’s main street, with two metal signs where publicity was pasted:

That’s it. Nothing else was posted anywhere in the village (at least that I could see). Now have a closer look:

On the left is a poster for Daglan Autrement, which means “Daglan Differently,” or “Daglan in Another Way.” It includes a photograph of all 15 candidates, with leader Raymond Wey front and centre.  Monsieur Wey is a retired doctor and general in the French Army.

On the right is a poster with the 15 candidates for the other list, Daglan Demain, or “Daglan Tomorrow.” Front and centre in this poster is Pascal Dussol. There is also a simple sign promoting a public meeting (for the Daglan Demain team) held on Wednesday, March 19. (The Daglan Autrement team had held its public meeting on Saturday, March 15.) Monsieur Dussol owns a restaurant in neighbouring St. Cybranet, noted for its pizzas and its soggy and greasy French fries.

Now if you think the publicity is low-key, wait until you see the single, simple sign on the doors of our Salle des fêtes, or community hall, indicating that this is the place to vote: 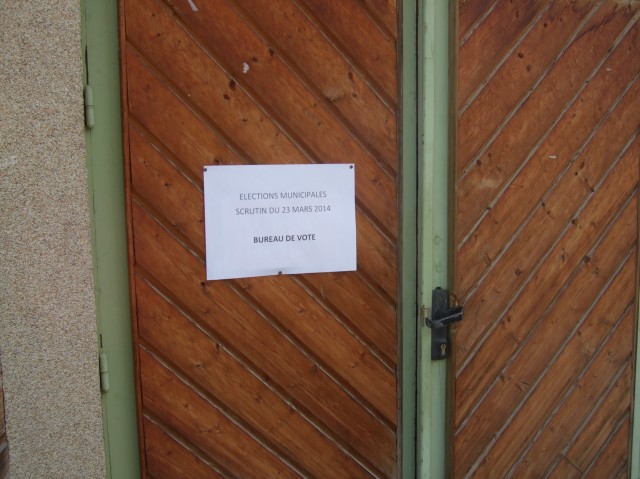 Here’s where you vote.

That was it. There wasn’t even a sign visible from the road, pointing toward the voting station at the hall. As in so many areas of village life, it seems to be expected that everyone will simply know what should be done, and where.

In any case, despite the low-key publicity, the turnout yesterday was huge — of the village’s 462 eligible voters, nearly 89% came out and voted. And their voice was loud and clear: the Daglan Autrement list was roundly defeated, and the Daglan Demain team was overwhelmingly endorsed. Twelve members of the Daglan Demain list of 15 were elected; only three from Daglan Autrement (including the leader, Raymond Wey) were named to the village council.

Disclosure: Now here I should note that the Radio Free Daglan family was involved a bit more than you might have known, as my wife Jan had been persuaded to run for the village council on the Daglan Autrement team. It was not something she actively sought, and she did worry that her French language skills might not be sufficient for the fast-talking ways of political life. But eventually she was convinced, and wound up playing an active role in activities such as door-to-door campaigning, attending meeting after meeting, and helping to deliver flyers. Although in the end she wasn’t elected, she did attract 165 votes — a good total, when compared with the 232 votes for Dominique Pasquet, who received more votes than any other candidate.

So as we understand it, there will be no need for another vote next Sunday. Daglan’s council of 15 members have been selected, and in due course the councillors will elect one of their members as mayor. We are assuming that the mayor will be Pascal Dussol, leader of the Daglan Demain list, since that’s the way things are usually done.

12 Responses to The people have spoken: Daglan’s election