You might think that Italy and Spain get fairly equal billing around here, since they both border France, but in Southwest France, including the Greater Daglan Area, Spain is ahead by a country mile.

It’s not uncommon for full-time or part-time GDA residents to spend part of the winter in Spain, while we rarely hear about visits to Italy. And when it comes to food, Spanish products like chorizo sausage are readily available in supermarkets, whereas Italian foods are much harder to find.

Now that we’ve slid beautifully from winter into a warm and sunny spring, I have to admit that I love seeing the bright colours of Spanish (and Basque) food on our plates. Today, for instance, my wife Jan and I drove north from Daglan to Castelnaud for lunch at Le Tournepique, the Basque restaurant that’s one of our “everyday” favourites.

Here’s a view from our table in Le Tournepique today, looking out towards the Dordogne River: 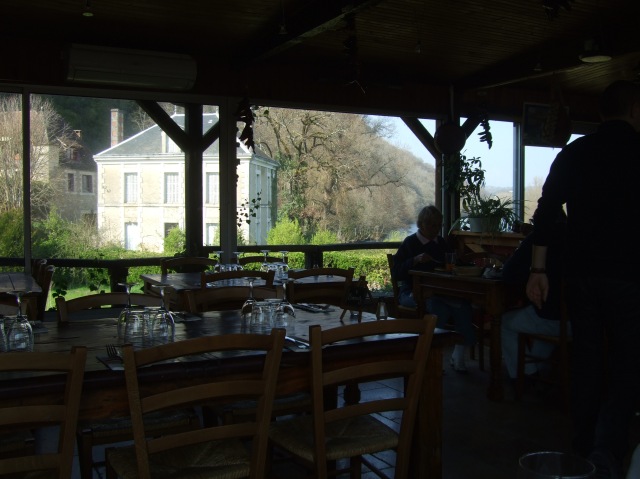 A view from Le Tournepique.

I last wrote about the restaurant on August 14, 2013. In that posting, the lunch I described included exactly the same main course I had today — lomo, or pork loin, that’s sautéed with sweet red pepper strips, garlic and parsley, and then served with frites and a green salad. And here’s a look at my plate today:

Pork loin and frites, with salad.

We’re also starting to expand our repertoire of Spanish dishes cooked at home. Jan’s paella has been a favourite of ours for years, and we find that its bright colours can be a great antidote to gloomy weather. But because of a new cookbook that I recently received as a birthday gift (from daughter Anne, son Mike and their partners), we’ve added a couple of dishes that have already become favourites.

The first we tried was Arroz caldoso con pollo y guisantes, or Soupy Rice with Chicken, Peppers, Fennel and Peas. It was wonderful as a main course, but the pieces of chicken were finished before all the rice mixture had been consumed. So we thought the leftover rice would be a good accompaniment to another meal, and it was — here being served with breaded rascasse (my favourite Mediterranean fish) and green beans.

A rice dish that went the distance.

Then came Gallina de guinea con judias estofadas, or Braised Guinea Fowl with White Beans. The cookbook’s author, Rick Stein, begins the recipe with “I would almost call this a Spanish cassoulet…” which was good enough for me, since I love cassoulet (the classic beans-and-meat dish of Southwest France). Here’s what I cooked up for lunch one day recently:

Finally, here’s a look at the cookbook itself. If you’re not familiar with Rick Stein, he’s a well known English chef who’s famous for his seafood. But he loves all kinds of food from around the world, and has done some excellent television series (on the BBC) about his culinary travels.

The cover of my latest cookbook.

As it happens, we also have his cookbook on Indian foods, Rick Stein’s India, which is published by BBC Books. Very authentic, very good.

2 Responses to Spanish flavours and colours on French plates