Clever food in Cahors — Dish No. 2

Yesterday I introduced you to what I thought was quite a clever dish served at the restaurant Le Marché in Cahors, which is about an hour’s drive south of Daglan. Today I’ll serve up another clever concoction, but only after a brief Public Service Message.

Public Service Message: A loyal reader has sent me a private email, wondering why a camel has been featured in the “header photo” at the top of Radio Free Daglan. The short answer is that the camel was part of a travelling circus that spent a week or so camped near Daglan’s rugby pitch. The fuller answer is that each Sunday, I change the header photo, and then I write a sentence describing the photo in the “About” page of this blog. So if you’re ever interested in a new photo, just click on “About” at the top left of the blog, and you’ll get an update. To return to the latest posting, just click on “Home.” So, there you go. And now back to food.

Yesterday’s clever dish involved an entrée in which a runny egg yolk was somehow magically enclosed in a crunchy sphere. Today’s clever dish is the dessert that our friend Bob and I ordered with our lunches on Thursday at Le Marché, where we ate with our wives Tish and Jan.  In case you missed a look at the restaurant, here’s a photo from yesterday’s blog posting:

Approaching the entrance to Le Marché.

The dessert in question is a real twist on Poire Belle Hélène — created in the mid-1860s by the great chef Auguste Escoffier. It’s been one of my favourites for years, and it’s a classic. It’s supposed to be made from pears that are poached in sugar syrup, then topped with vanilla ice cream, on which warm chocolate sauce is poured, with a few crystallized violets (or sliced almonds) for garnish. But the chef at Le Marché, Hervé Bourg, had other ideas.

His version was called poire Hélène inversée — if you will, upside-down Poire Belle Hélène. When it arrived at my plate, I could see that there was a frozen semi-circle of chocolate on top of a scoop of ice cream, with minced poached pears on the side, plus some decorations made of toffee surrounding hazelnuts. But what was the jug on the side, which looked a bit like chicken soup?

“Qu’est-ce que c’est?” I asked our server. “Attendez,” she said, smiling — “just wait.” And then she proceeded to pour the liquid, which turned out to be hot pear syrup, over the chocolate. Here she is pouring the liquid over Bob’s dessert:

A hot syrup is poured over the cold dessert.

And what happened? Well, the hot pear liquid melted the chocolate, which then bubbled up and turned into a warm syrup, running down the ice cream and onto some sponge cake below. “Brilliant,” I thought, and greedily dug in. Meanwhile, Bob’s wife Tish had a taste, and thought it needed just a touch of something sharp on the side, like a bit of lemon. But Mr. Sweet Tooth (moi) was perfectly happy. 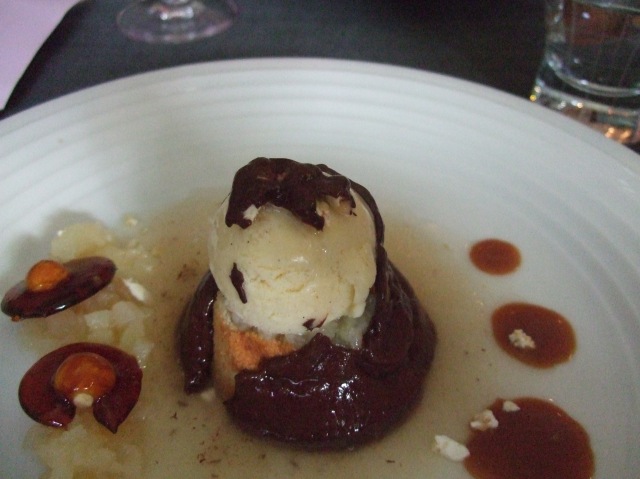 Voilà! The frozen chocolate bubbles up and then melts away.

As a final note, I think our order may have been one of the first times that Chef had tried this twist on the classic dessert, because when the dishes were brought to our table, I saw Chef Bourg escape from the kitchen and stand off to the side, watching for our reaction. I can only imagine that he was happy.

5 Responses to Clever food in Cahors — Dish No. 2