We have been enduring rainy weather for days and days, so it was delightful this morning to wake up to sunshine — and to know that my wife Jan and I wouldn’t get soaked while attending the Jour Armistice ceremony that was to begin at 11:30.

I wrote about Daglan’s ceremony to mark Armistice Day (or Remembrance Day, or Veterans Day, if you prefer) on November 11 three years ago, which was the first such ceremony that we’d attended in the village. (If at all possible, we now attend the village’s ceremonies that mark the ending of both World Wars, on May 8 and November 11.) The photos I posted that day show everyone standing around holding umbrellas, or else simply getting wet. So today made for a pleasant change.

The ceremony began, as always, with a procession moving from the Mairie (the Mayor’s office) to the war memorial that stands in front of the restaurant Le Petit Paris. A veteran then reads the list of Daglan residents who lost their lives in both the First World War and the Second World War. After each name is read, we all recite “Mort pour la France,” or “Died for France.” Here the veteran stands beneath the flagpole, reading out the names: 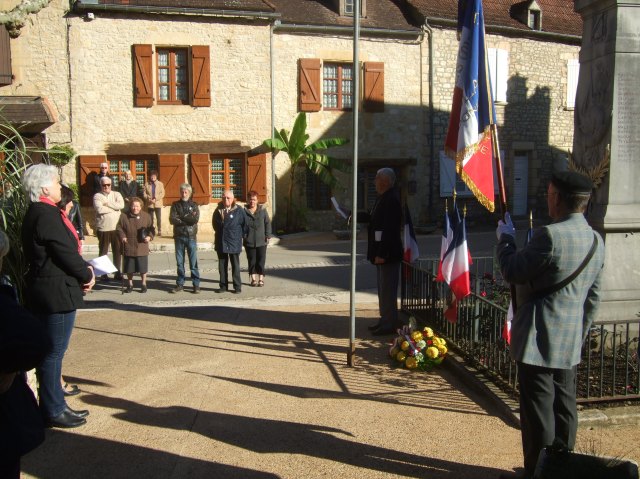 Reading the names of those who died “pour la France.”

Following that part of the ceremony, our Mayor reads a prescribed text that describes the impact of World War I on villages like Daglan, and indeed all of France. Here she is:

Our Mayor reads the commentary on the meaning of November 11.

Following her statement, we observe a minute of silence:

A moment of silence.

Then the group sings La Marseillaise (without any musical accompaniment this time), and the Mayor makes a few announcements — chastising several absent Conseillers Municipaux for not showing up for the ceremony, warning about an unauthorized calendar salesman who may be bilking residents, and providing details about a funeral this week. Here she is again:

The Mayor makes a few announcements.

When the ceremony at the war memorial concludes, the group moves off to the village cemetery, where flowers are placed on the graves of those who were killed in the wars. Here is the basket of traditional chrysanthemums being carried away to the cemetery:

A basket of chrysanthemums, headed for the cemetery.

This is a view back towards the village from the cemetery, which rises up one of the hills that defines the Céou River valley:

The view from the cemetery.

And finally, here is a look at the group in the cemetery — with a young village girl having the honour of placing flowers on one of the graves:

A young girl has the honour of placing some flowers on a memorial.

Afterwards, the group was invited to enjoy a glass of wine at the local tea room, but I had other plans. Given that it was the first day of sunshine in a long time, and with more rainy weather predicted, I hopped on my bike and went for a ride.

3 Responses to Sunshine and remembrance