A trip to wine country — for seafood

Yesterday’s journey shaped up quickly. My wife Jan started it by noting that we had no plans for Sunday, and suggesting that we should go for a long drive. Okay, but where? How about St. Émilion, one of France’s most celebrated wine regions? Sure.

To do what? Have lunch, silly. Okay, but where? How about L’Huitrier-Pie, a restaurant we had discovered on our only previous trip to St. Émilion, some four years ago? Agreed. Reservation made. We’re off.

The trip is about 130 kilometres each way, a bit more than a two-hour drive — west from our village of Daglan, past Lalinde, past Bergerac. We continue past vineyard upon beautifully trimmed vineyard. Just before 1 p.m. we reach St. Émilion and drive up and through and around it, finally finding a place to park. Then we walk to L’Huitrier-Pie.

The restaurant is named the Oyster Catcher because its speciality is seafood. Four years ago, before we had moved to France, we had arrived in Bordeaux on vacation, rented a car, and driven to St. Émilion for a quick visit before driving on to our own village. We had stumbled upon L’Huitrier-Pie, and had a wonderful meal; in fact, Jan remembers that I said it was the best cod I’d ever eaten in my life. Here’s the entrance:

It’s a modest, relatively small, and thoroughly comfortable restaurant. Here’s the room where we were seated:

One of the rooms at L’Huitrier-Pie, where we ate lunch yesterday (Sunday).

Once we were settled, with the inevitable kir in front of each of us, we were served a small dish of crème brûlée made with foie gras. Unlike similar dishes we’ve eaten in the past, this was a bit salty, which we both thought suited the start to a meal better than a sweeter version. Here’s my dish: 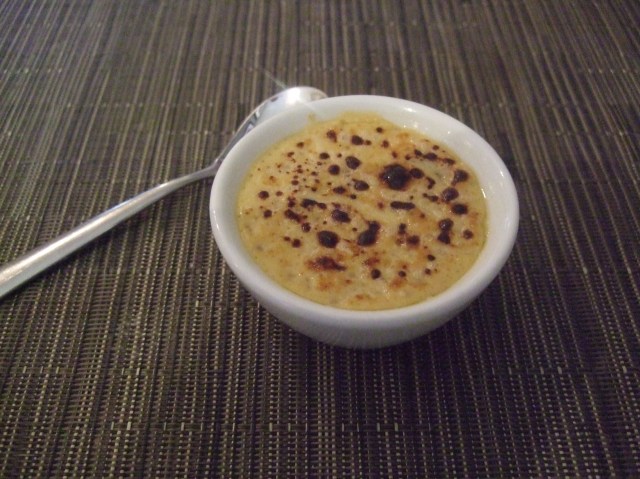 For our wine, I wanted a dry white that would work well with the seafood we were planning on ordering. This bottle of Muscadet Sèvre-et-Maine (produced by the Castel family at the Clos des Orfeuilles property in the western Loire Valley, not far from Nantes) turned out to be a delicious choice: 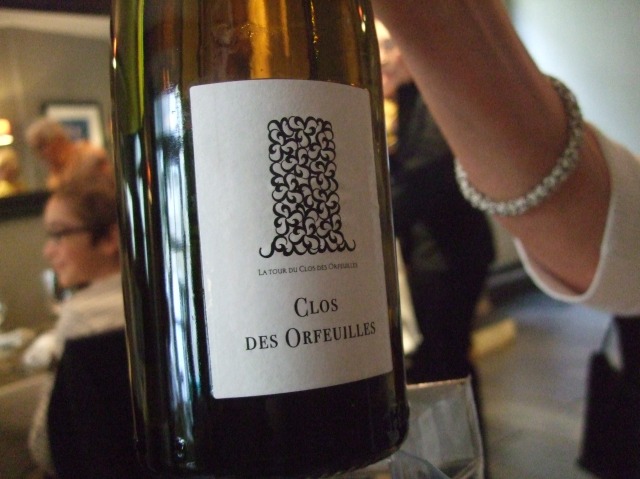 A crisp white wine to accompany the seafood.

Like many (most?) French restaurants, L’Huitrier-Pie uses an ardoise or slate to show off its specials, in addition to its printed menu. Since oysters from Brittany were at the top of the slate, and were included as the entrée on the 36-euro menu (see photo below), it didn’t take long for us to choose the oysters.

Oysters from Brittany were at the top of the chalkboard.

And here they are — six oysters each, served on a bed of shaved ice, with a simple wedge of lemon. (Hot sauce and similar goo on oysters may be used by people who don’t like oysters.) They were salty, strong flavoured, and delicious. 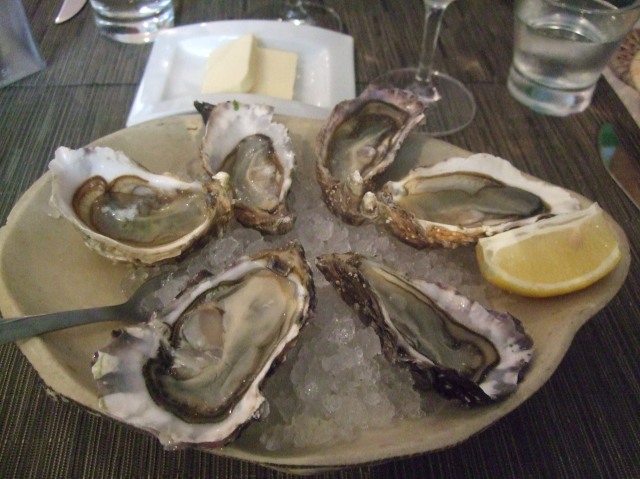 A plate of six oysters, with a simple wedge of lemon. Perfect.

I also was quite taken with the little “spork” we were given to dig our oysters out of their shells. I don’t think I’ve ever seen this kind of spoon/fork combination used with oysters, but it was quite handy. 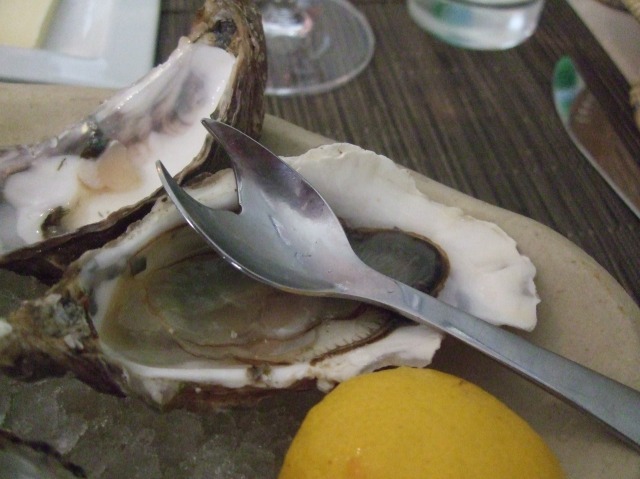 A “spork” for our oysters.

At the bottom of the ardoise were the fish specials for the day, including maigre (a type of sea bass) served with shrimp and a variety of vegetables in a light sauce or broth. It was the fish choice for the 36-euro menu (le poisson du menu à 36 euros), and both Jan and I opted for that.

Fish specials at the bottom of the chalkboard, or ardoise.

And here’s how my plate looked, with a generous serving of the lean white fish, a few shrimp, and a nice variety of vegetables:

My serving of sea bass with vegetables.

For my dessert, I chose something really refreshing — a granité of watermelon with mint, served on top of a bowl of sliced seasonal fruit, including apricots, yellow peaches and white peaches. (Granité is the French word for flavoured and sweetened ice, which is scraped into small, grainy particles — a more refined version of the Sno-Cones we had as kids.) Here’s my dessert:

Jan’s dessert was a sort of panna cotta, served along with apricots that had been roasted with rosemary. Here’s her serving:

A creamy dessert, accompanied by apricots roasted with rosemary.

After our coffees, we had a long — and I mean long — stroll back through the town to reach our parked car. In tomorrow’s posting, I’ll give you a look at St. Émilion itself, and suggest why it’s a wonderful place to visit.

2 Responses to A trip to wine country — for seafood