Variations on the theme of lamb shoulder

For several years, I have been tinkering with a French recipe for shoulder of lamb, trying to correct what might be called The Lemon Dilemma. Now I believe I have solved it.

At this point, if you have no interest in cooking shoulder of lamb or eating it, you might want to wander off to another blog or website. Otherwise, stick around.

The recipe in question is for Épaule d’Agneau à la Catalane, or “Catalan-Style Shoulder of Lamb,” and comes from my favourite cookbook, Saveur Cooks Authentic French. The meat is browned, then slow-cooked in a heady mixture of spices and herbs, tomatoes, lemons, and sweet wine. The result is an incredibly tender piece of meat that virtually falls off the bone, sort of like the lamb version of pulled pork. It’s not pretty, but it’s pretty yummy.

Before I explain the problem in following the recipe, and my solution, here’s a look at the dish as I made it recently. The meat is covered with tomatoes, and it’s resting on a large platter with some lemon wedges, just before we dug into it.

The finished lamb shoulder on a platter, covered with tomatoes.

Now to The Lemon Dilemma, and my solution. The original recipe comes from Madame Françoise Massot, a cook in the Pyrénées, about 370 kilometres due south of our village of Daglan, in what might be called “the Mountain Suburbs of the Greater Daglan Area.”

In any case, the recipe calls for blanching several fresh lemons, cutting them into small wedges, smooshing them around in the fat that comes off the lamb shoulder when it’s browned, and then leaving them in the sauce as the lamb cooks. But the first time I made the dish, we found the sauce bitter and unpleasant, and I wound up adding sugar to correct it. By “bitter,” I don’t mean “sour” (because sweet-sour combinations are generally quite nice); I mean an actual “bitter” taste that probably comes from all the white pith of the lemon.

Since then, I’ve tried some variations — using fewer lemons, and using preserved lemons instead of fresh ones — but haven’t been fully satisfied.

Then recently, while hunting in vain for a bottle of preserved lemons in a nearby supermarket, I came across this new ingredient and thought I’d give it a try. Here it is: 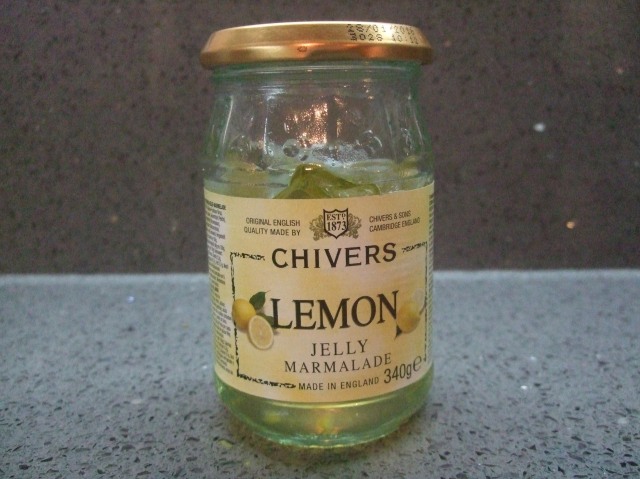 The new ingredient seemed to do the trick, so now here’s the full recipe. (Obviously you can fiddle with the amounts of ingredients as you go along.)

Start by browning a shoulder of lamb, that you’ve seasoned with salt and pepper, in a heavy casserole or Dutch oven; the original recipe says not to add fat, but I do use some olive oil. Meanwhile, peel the skin from a single lemon with a potato peeler, making sure to get as little of the white pith as possible, and blanch the skin in hot water in your microwave for two minutes.

Now take the browned lamb shoulder out of the casserole. Cut the blanched lemon skin into three or four pieces and put them in the hot casserole, with the juice of the lemon you’ve just peeled. Acting fast (because the juice will evaporate quickly in the hot casserole), stir in 10 cloves of peeled garlic, two sticks of cinnamon, a large can of peeled whole tomatoes (with their juice), and a whole bottle of banyuls or ruby port. (I always used ruby port when we lived in Toronto; recently I found banyuls in a local supermarket; it’s a sweet fortified wine made in the Pyrénées.)

Now put the lamb back into the casserole; add a few sprigs of fresh thyme and two or three bay leaves; and a couple of large spoons of the lemon marmalade. Now bring the whole mixture up to a boil. Once it’s started bubbling, take it off the heat; cover the casserole tightly with aluminum foil; and put the casserole’s lid back on top.

To finish, put the casserole in your oven, preheated to a relatively low temperature — say 165 Celsius or 325 Fahrenheit — and let it cook for one and three-quarters of an hour.

To serve, remove the cinnamon sticks, thyme springs, lemon peel and garlic, and cut or pull off the meat in thick chunks or slices.  The sauce won’t be terribly thick, but it will be sweet and rich and spicy. Typically we serve the lamb with mashed potatoes and a vegetable; for our recent lunch, I cooked carrots and finished them with Grand Marnier and blue poppy seeds. I also found that a squirt of fresh lemon on the meat really brightened up the taste.

And here’s the result:

My lamb lunch, ready for a squirt of lemon juice.

As a final note on cooking, I’ve found that I have much better luck by using the oven (instead of the stove top) when I’m braising dishes like this. For some reason, food usually gets stuck to the bottom of the pan when it’s on a burner, while I never have that problem with the oven.

2 Responses to Variations on the theme of lamb shoulder