It’s a sign that summer in the Greater Daglan Area is officially coming to an end — the final Saturday in August heralds the last of the year’s night-time food markets in St. Pompon, just five kilometres from our village.

It’s a really enjoyable and authentically French affair, which I described fully in my posting of July 21 of this year, “A Good Night.” So last night my wife Jan and I simply had to be there.

Having seen campgrounds become more and more deserted over the past week or so, we fully expected the turnout for St. Pompon’s Marché Gourmand Nocturne to be down significantly. Not so.

When we arrived at just about 7:30, here was the scene in one of the main parking lots for the market:

Parking was as jam-packed as ever.

So we turned the car around, parked well up the road from the village, and then walked back to the centre of the action — where we were confronted by the usual number of food stalls and what seemed like the usual number of packed picnic tables. Here was the scene: 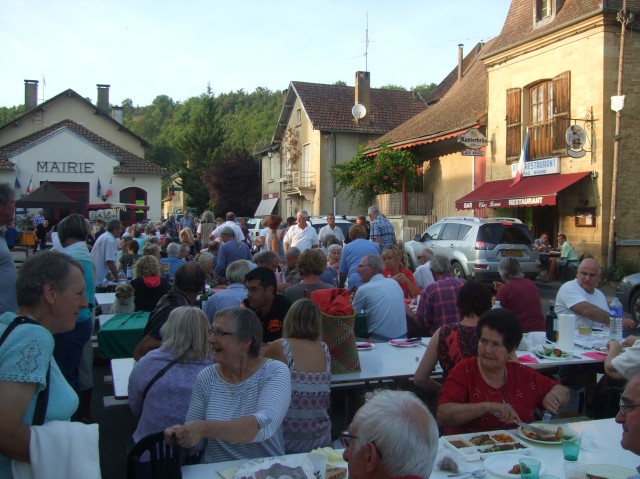 It was hard to find a place to sit and eat.

Eventually we did find a table near the dance floor, and happily relaxed to watch the action and enjoy a light meal: a few oysters (briny and delicious), too many frites (crispy and hot and as good as ever), and a few glasses of rosé wine (quite good, especially at one euro per glass).

We also started chatting with two French couples who, as it turned out, just happened to sit at our table and didn’t know each other. One couple was on vacation from Alsace, in northeast France, and the other couple was originally from Lorraine (also northeast France) but had moved to St. Pompon for their retirement.

All four were friendly and pleasant, and made an effort to slow down their speech just a touch, to make conversing in French a bit easier for us.

We discovered that the woman who now lives in St. Pompon is the leader of the local country dance group (and of course we’re invited to get involved). Here she is with her husband (in blue) on the dance floor, leading off a traditional dance: 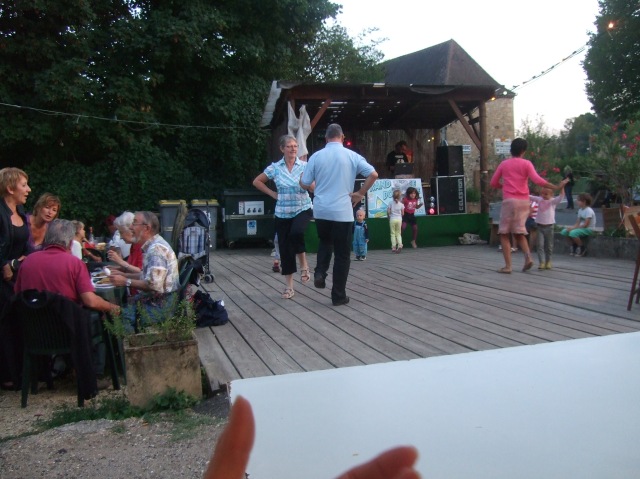 For some reason, there seemed to be more kids at last night’s marché than usual, or else they were just more keen to run and jump around the dance floor. For a lot of the early evening, we were entertained by children racing around, running into their parents’ arms, and then racing off again. Here’s a look at the action:

For some reason, the kids were especially active on the dance floor this evening.

As darkness closed in, the dancing moved from traditional country dancing to the Macarena (what a surprise!) to a few dance tunes that seemed to us a bit formulaic. Here are some of the dancers (still including a lot of kids) under the lights:

Night falls, and the dancing goes on under the lights.

What — no good old rock ‘n roll? No “Gangnam Style”? Evidently not, so we decided we had had enough marché and headed home without having danced. But no complaints, because we’d spent another enjoyable Saturday evening. And there’s no doubt we’ll be back in St. Pompon next summer on many Saturday nights.