Beneath the foam: A look back at the fête

The dust has settled, the confetti has been swept up, the stalls and rides and loudspeakers are gone. With our village’s annual fête finished, it’s time for one last look back — to reveal a bit of the politics that can bubble beneath the surface of  such an event.

But to do this, you’ll need some background.

First, you just may remember that in the middle of July, Daglan hosts a party called a Bodega. This is actually part of what’s called a Bodgea Tour, which means it’s a centrally organized event that moves from town to town, village to village. It includes food and drink stalls and balloons and games for kids, followed by a late-night dance party where the beer keeps on flowing. Afterwards, things can get a bit rowdy and messy, as I wrote in my posting “The two sides of Bodega,” on July 17, 2011.

As for this past July, my wife Jan and I missed the Bodega completely, because we were in Paris that weekend. However, when we returned, we heard that there had been trouble after the event — a dust-up that led to someone being injured seriously enough that he had to be taken to hospital.

And then we heard that the département government was not amused, and that the person responsible for organizing the event in Daglan had been dismissed from his post (details were sketchy at best). Excessive consumption of alcohol was cited as the key problem for the fighting, and the prescription was to call for tighter controls.

Now we come to the annual fête. I first sensed that something was amiss when it dawned on me that there were no yellow banners scattered throughout the village, celebrating the various themes of the fête parade over the years. Here’s what the banners looked like:

Yellow banners for the fête, in another time.

This year, no banners. And in general, there seemed to be less direction, less energy put into organizing and publicizing the festival. Could the village administration have taken over the job of putting up the banners? Seems logical to me, but it didn’t happen.

What did happen, however, was that the sale of drinks at this year’s fête was ordered to be stopped at midnight — which obviously upset some party-goers who prefer a more open approach to consuming alcohol. And that led to a bit of a protest.

I’ll show you how the protest took shape, but first I have to provide yet another bit of background.

In this case, it’s the French tradition of putting up long poles (usually trunks of pine trees, with most of the branches chopped off) with signs to honour someone or some group — usually elected officials. (Honneur à nos élus, they usually read.) For instance, here’s a photo I took more than five years ago, showing one of these poles being erected in Daglan’s main square, following the spring election of civic officials: 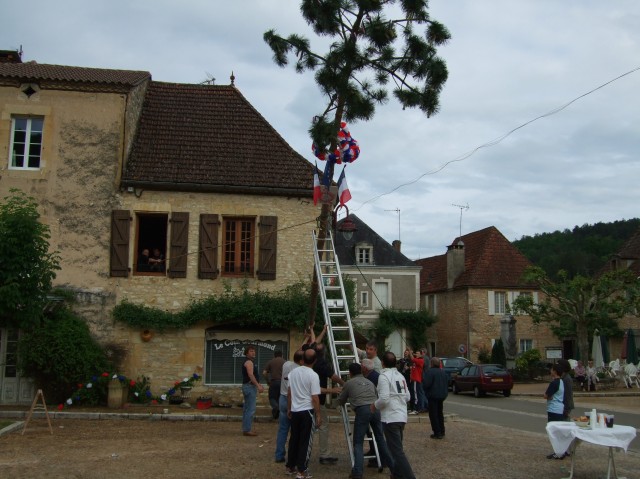 Raising a pole to honour Daglan’s elected officials (May 2008).

Now leap forward to this year’s festival, which started on Friday night, and which featured the midnight curfew on drinking. The next morning, the pole shown below was found tied to the side of the Daglan Mairie (the Mayor’s office), clearly protesting the new drinking policy. Translated, the sign says “Honour to our traditional Daglan festivals, with alcohol. Thank you.” 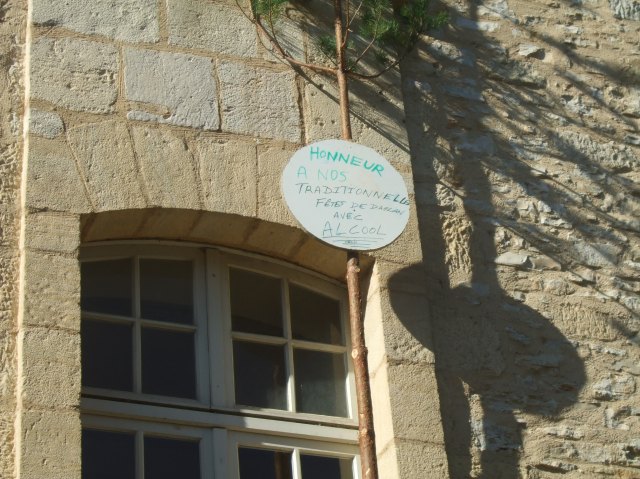 Now you and I may think this was a rather clever dig at the powers that be, but it seems that our Mayor was not amused. Evidently she called for the Gendarmes to investigate and for the pole to be removed immediately, if not sooner. When I returned to the village from a bike ride the morning the pole was discovered, I found a police car parked near the Mairie, and a couple of officers asking pointed questions of people in the area.

And now we come to last Sunday’s parade, and all the foam that I described when I wrote about this year’s festivities. Here’s a picture of the float that was generating all the foam, presumably having a bit of fun with OMO laundry powder:

The OMO float — centre of attention at the parade.

You may recall that in my posting on the parade, I pointed out that the front of the laundry soap package on the float said “0% alcohol.” What I missed at the time, however, were the words that you can just barely see on the side of the float: Promo. Printemps 2014. Grand lessivage.

It should be quite an election campaign.

8 Responses to Beneath the foam: A look back at the fête