I certainly know when the seasons change in the Greater Daglan Area, but I’m not always quick to react appropriately. I think my problem is simple momentum — I get into  a certain pattern of behaviour, and then don’t automatically make the right change.

For example, it will be mid-November and finally it will occur to me that I can put my short-sleeved shirts in an upstairs closet. Conversely, it will be mid-June and suddenly I’ll notice that the jacket that’s hanging on the coat rack hasn’t been worn in weeks, so I might as well put it away.

We had a similar problem fairly recently, as the GDA moved rapidly from our long, cool and very rainy spring into a hot, dry summer. I had become so used to ignoring the plants around the house — after all, they were getting soaked by rain virtually every day — that I missed the signs that they were drying out and starting to gasp for water.

Which brings me to our poor little Christmas bush.

As I’ve explained in Radio Free Daglan before, my wife Jan and I are like many other cat owners who find it easier and wiser not to have an actual Christmas tree in the living room. From experience, we’ve learned that cats would prefer to knock the tree over and eat the tinsel, rather than simply sit by the fire with a cup of egg nog and admire the tree’s beauty.

So last year, we had a brainwave and decided to buy a potted holly bush, and decorate it for Christmas. With its prickly leaves, it was sure to keep our cat Scooter at bay — and it did.

Here it is, decorated with a few bulbs and a few ornaments. Okay, it’s not right up there with the Christmas tree in front of the White House, but it did the job. 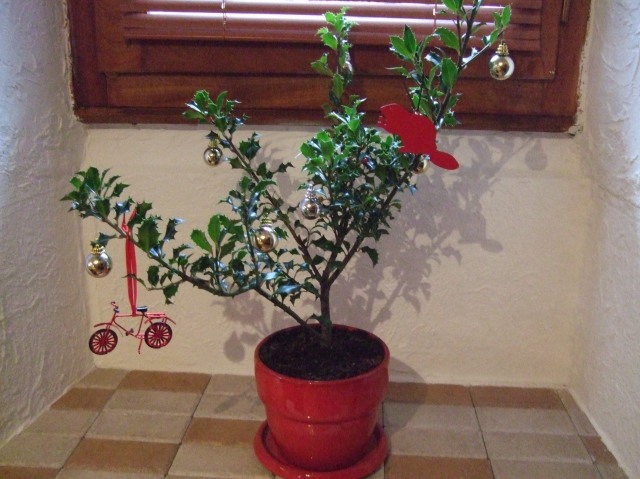 After Christmas, I thought I would transplant the bush from its pot into a flower bed at the front of the house, where it could look up and admire one of our wisteria. After a few anxious weeks when the holly looked dormant to the point of being dead, it started to sprout new growth. Hurrah!

Then came our hot summer, and since I was still in my automatic the-rain-will-take-care-of-all-the-plants mode, I ignored the holly bush (and pretty much everything else). Finally it struck us that none of the leaves on the bush was green; they were all brown, and dropping fast.

We could have given up, of course. But I thought it was worth trying to save the bush, and so I started watering it thoroughly, and regularly. And it’s working! Here’s the wee bush, gamely pushing out new leaves, even as some of the dead leaves hang on to the branches:

Small green leaves are popping out all over the bush, while the brown leaves lie all around.

It’s still got a long way to go, so now the big question is whether it will be in top form for this coming holiday season. Fortunately, there are still 150 growing days until Christmas.