We’ve often eaten at the Basque restaurant Le Tournepique, located at the foot of the bridge at Castelnaud, about 10 kilometres from Daglan — to the point that we’ve become creatures of habit. My wife Jan orders the mussels with frites, while I have the Basque omelette.

But today, we went all crazy and tried something new. (We’re continuing to eat outside our home every day, in case you’re wondering, as our kitchen renovation goes on.)

Okay, our choices weren’t totally new. We did begin as usual with a kir, the white-wine-and-Cassis apéritif. And as usual in the summer, we did order a bottle of Navarre rosé wine, which we especially like. It’s produced by Bodegas Orvalaiz in Obanos, about 21 kilometres south of Pamplona, and the only thing wrong with it is that we can’t figure out how to order it by the case.

For our meals, however, we did diverge from the routine. Jan ordered faux-filet with frites, and thought the meat was delicious and tender — which is not always the case with steak in France. (Faux-filet is usually translated as a sirloin steak.)

As for my lunch, I decided to try a whole fish that’s done on the grill in the Spanish style — La Dorade Royale à l’espagnole. At 20 euros for the dish, this was not exactly inexpensive; by contrast, the entire five-course meal at Le Diabolo-Fraise, described in yesterday’s posting, cost just 13 euros.

Dorade Royale is a Mediterranean fish, which is sometimes translated into English as a gilt-head bream. But it’s pretty specifically Mediterranean, so I’m happy with Dorade Royale for its name. Chefs appreciate it (I’ve read) because there’s a nice little layer of fat between the skin and the white flesh, and the fish itself is meaty, like pompano or snapper.

For the Spanish touch, the fish was done à la plancha, meaning that it’s cooked on the grill (not a charcoal grill, but more like what a North American would call a flat-top). When my plate arrived, the fish had been opened up, so I could dig out the flesh (and pull out quite a few bones, I have to admit).

True to its name, it was served with lots of olive oil, peppers and slivers of garlic, with some steamed potatoes and a few grilled bits of eggplant (aubergine) and zucchini (courgette). Here it is: 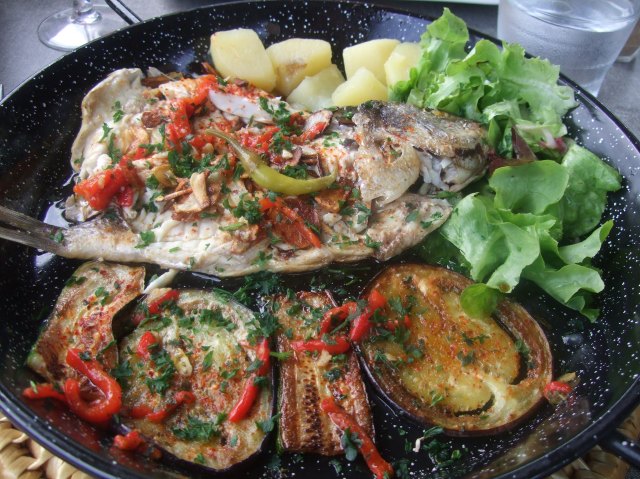 An intense combination of Spanish flavours.

It was delicious — a good change from the Basque omelette, and I’m sure I’ll have it again. But I do love that omelette.