Cheap and cheerful — and generous

Years ago, when my wife Jan and I lived in Toronto, we would often start planning an informal lunch or dinner with friends by saying, “Nothing special. You know — cheap and cheerful.”

Well, it was always a good idea, and our get-togethers with friends were always cheerful, but we soon learned to forget about the “cheap” part of the meal. In our minds, we were thinking $25, but in our credit cards, we were feeling $100. At a minimum.

Unless we ate at a fast-food place (Ha!) or didn’t order wine with the meal (double Ha!), the outing was hardly “cheap.”

Here in southwest France, however, “cheap and cheerful” is surprisingly available. I do realize that you believe we eat almost nowhere unless it has at least one Michelin star (Le Grand Bleu in Sarlat, Le Vieux Logis in Trémolat) or is mentioned in the Michelin red guide to hotels and restaurants (Daglan’s Le Petit Paris).

But there are other choices, and some are surprisingly good — quite cheap, definitely cheerful, and almost ridiculously generous in their offerings.

These are the cafés and bistros that offer what is sometimes called a menu du jour (a menu of the day, or daily special menu) and sometimes a menu ouvrier (a worker’s menu). The concept is pretty simple: It’s a lunchtime menu, there is lots of food, very little choice, and a very low price. Here are just a few examples in the Greater Daglan Area, all worth trying: 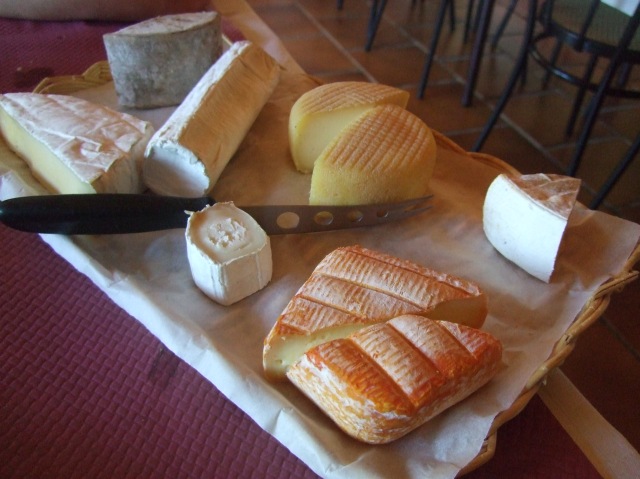 An abundance of choice: How wonderfully cheesy! 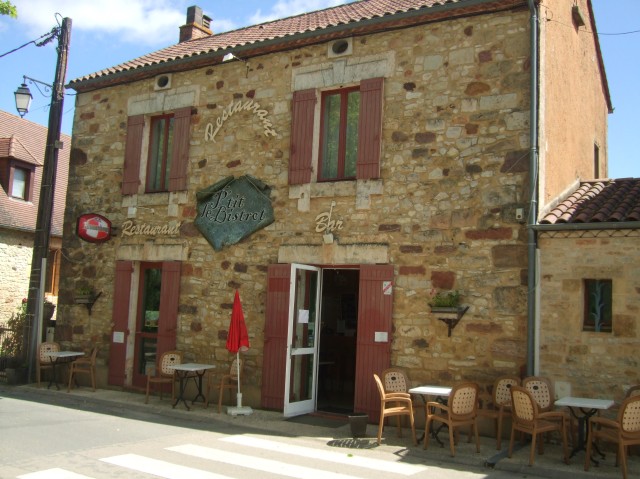 The entrance to the bistro in Saint-Laurent-la-Vallée.

We now come to our most recent discovery. A few days ago, our friend Tish asked us if we’d like to try an informal spot she had just learned about in Nabirat, about 10 kilometres east of Daglan, and of course we said yes. So here it is: 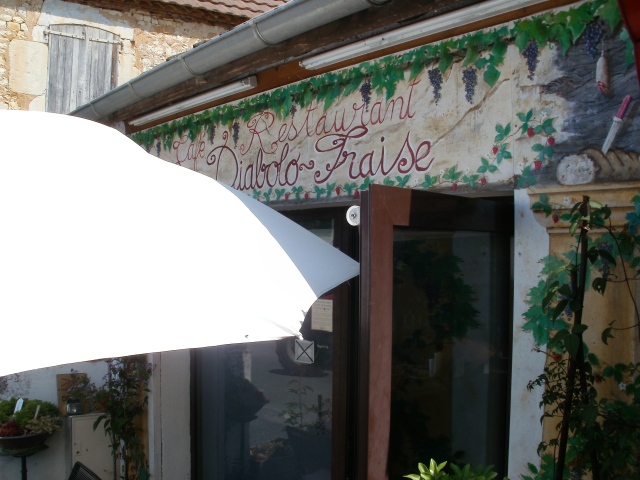 The sign over the entrance is a little hard to decipher.

Le Diabolo-Fraise, in Nabirat. This is really an informal country spot, in the middle of a rather pretty (and very quiet) village. Our hostess explained that the name comes from the fact that we are in “strawberry country” (there are plastic tents all over the countryside, protecting the strawberry crops); and more specifically, a Diabolo-Fraise is a soft drink made with club soda or a lemon-flavoured soda, and strawberry syrup. (With a smile, she said that the restaurant’s name wasn’t her choice.)

The three of us (Tish, Jan and I) sat outside on a shaded (but still very hot) terrace, and were immediately served a huge bottle of a rather rough but still drinkable red wine and a bottle of cold water. Then came the traditional vegetable soup, a serve-yourself-from-the-tureen affair that was quite good, with more really fresh vegetables than normal.

Following the soup came a composed salad that included sliced tomatoes and bits of mozarella cheese, and after that we were served the house specialty — the petit salé. This is a classic French dish of cured pork belly (the petit salé means that it’s been a little bit salted). The pork has been boiled and sliced, and usually is served with something like lentils or beans. Ours came with lentils. As our hostess proudly reported, this wasn’t the usual petit salé that you can buy in a supermarket; it was made in the restaurant. It was very good, and we could taste some interesting spices, probably including cloves.

After the main course came a dish with just one type of cheese (unlike the bonanza at Auberge sans Frontière), and then a lovely dessert featuring strawberries.

I stuck with the red wine (rather bravely, I thought) while both Jan and Tish ordered individual glasses of a Corsican rosé that they quite liked.

And the bill? Just 13 euros each for the five-course lunch, including the red wine, and just a bit extra for the glasses of rosé wine.

So this is another “cheap and cheerful” spot to add to your list of places to try in the GDA. It’s easy to find, right in the heart of Nabirat, and it looks like this: 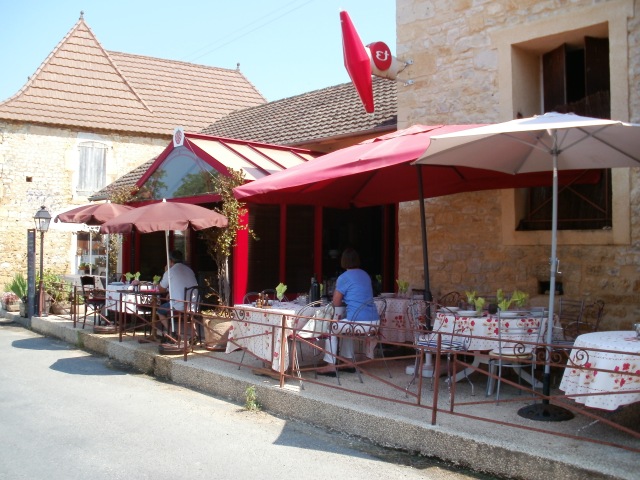 Street view of the restaurant.

As a final note, I’m compelled to write that while I like the places I’ve just reported on, I’m actually happier with fewer courses, unless the food is truly part of a fine-dining experience (like the ones we’ve enjoyed at Le Grand Bleu).

Today, for example, we ate lunch at Le Tournepique in Castelnaud, the Basque restaurant I’ve reviewed often, and I loved it.

Our lunch? A kir to begin, at 3.50 each. A bottle of rosé, at 16.50. My favourite — the Omelette Basquaise, filled with a delicious sauce of tomatoes, onions and peppers, and served with a large green salad — at just 9.50. Then there were the moules (mussels) for Jan, which she loves, and a large serving of piping hot and crispy frites. Topped off with one coffee (for me), the total bill came to 48 euros. Worth every centime.

Maybe not “cheap and cheerful,” but still generous, and absolutely delicious.