The dash through Daglan — whoosh!

My posting yesterday about the Tour de Dordogne bike race was all about traffic jams and slowdowns in the heart of our village. Today, we get to the racing part.

All of the action you’re about to see took place on Friday, which was the second of five stages of the Tour de Dordogne (the Dordogne being our département of France). This stage brought all the riders through our village of Daglan, and my estimate is that an individual racer would have spent no more than one minute in the village. These lads are really, really moving.

Any readers who are the least bit familiar with the Tour de France will recognize the pattern — lots of security, lots of support vehicles, and a very fast-moving bunch of young men on road bikes, moving very quickly.

So on this very hot and cloudless Friday afternoon, the real racing action began with one of several official vehicles leading the way. Here it is, passing by Daglan’s main square:

Now it gets serious: An official car leads the pack.

Within a minute or two, the racers in the lead group came through the village, moving at an amazing clip: 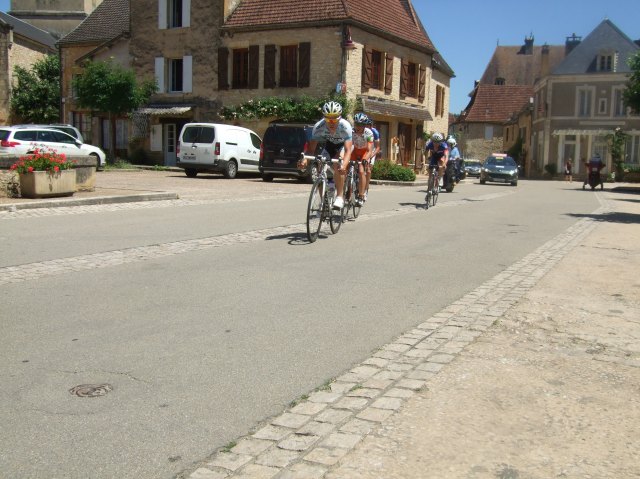 A small group of leaders race by us.

Right behind them (again, as you’d see at the Tour de France) are a number of support vehicles. These cars are loaded with supplies, bike parts (spare wheels, for instance), and even completely road-ready bikes. They are there in case a racer has a flat tire or crashes and scrapes himself, or has any other problem. Here come some support vehicles now: 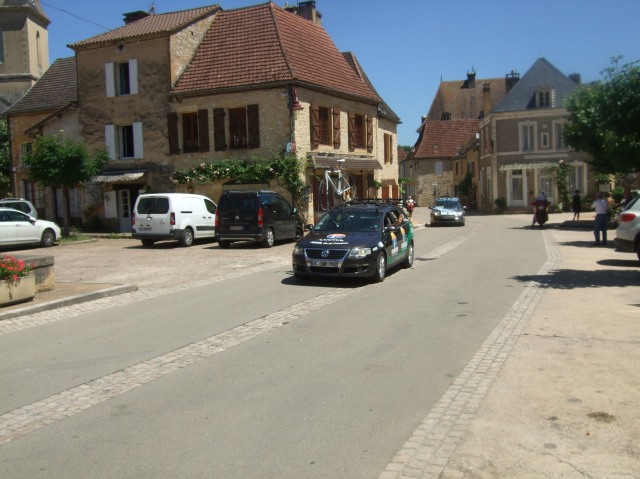 And then things get really exciting, because the peloton — or main group of riders — come into view, but with several roaring motorcycles leading the way, sounding their horns, and generally making spectators pay attention. Here they come:

Now it’s motorcycles clearing the way for the main pack.

And now, we start to see the long row of riders making up the peloton, all looking incredibly determined:

As they pass us, they seem to be less than a metre away from us. My wife Jan and I were standing in front of a house next to Daglan’s bakery, along with a couple of friendly English visitors (Arthur and Jan) who happen to live in Portugal and who have been touring the GDA. Here are some more riders, racing past us — whoosh!

Here’s the main train of riders, whooshing past us.

Before too long, the peloton starts to thin out, and at the end of the main pack of riders are the final support vehicles. Here comes the end of the bunch:

The main bunch of riders starts to thin out, as we reach the end.

Once the last group of riders went past, it was only natural that we would see a medical van and then a supply vehicle or two: 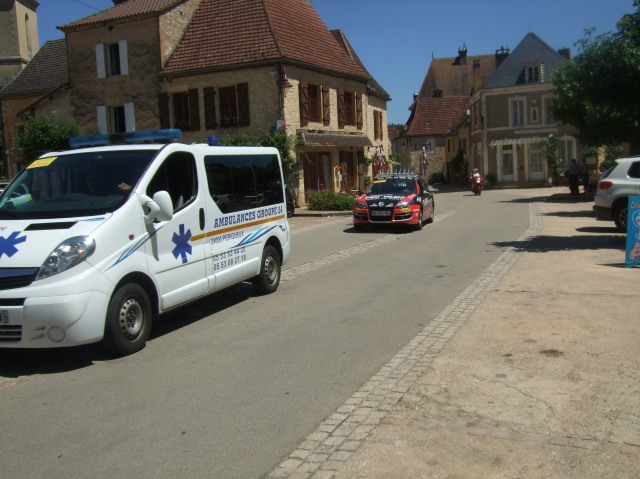 A medical crew follows at the end — just in case.

Finally, one team car passed us, with a single rider doggedly trying to get back into the race:

The very last racer follows a team car through the village square.

So, how exciting was it? Well, certainly not enough to draw a huge crowd. There were the two of us (the complete staff of Radio Free Daglan); the two visitors from Portugal; our friend Yves; another villager we didn’t recognize; and those few people who were finishing a late lunch on the terrace of the restaurant Le Petit Paris. But for Jan and me, a bike race is still a great rush — and in future, we’d certainly like to see some more publicity up-front. The Tour de Dordogne may not be the Tour de France, but it’s still exciting, and worth some more support.

3 Responses to The dash through Daglan — whoosh!