Our (too) quiet Sunday market

By this point in the year, it seems to us, the Greater Daglan Area should be a bit livelier — with more tourists wandering around, shopping, sightseeing, dining out, and of course clogging the roads. But probably because of Europe’s rainy and cool spring, it seems that fewer visitors are headed to the département of the Dordogne, at least so far.

In fact, English friends of ours who have a holiday home in Daglan recently opted to cancel their vacation here and instead spend the time on a sunnier Spanish island. As it turned out, that was a wise decision; during the week they had planned to be here, it rained almost every day.

This morning dawned a bit grey and cloudy, although at least it wasn’t raining. So my wife Jan and I walked up our street to the market that takes place each Sunday in the village’s main square. While the number of stalls has certainly increased since the low point of this winter, the market itself still isn’t buzzing. Have a look:

These days, the stalwarts are all in place — vendors of local wine, local goat cheese, roasted chickens, walnuts, honey and of course vegetables. Here’s a look at a row of the vegetables on sale: 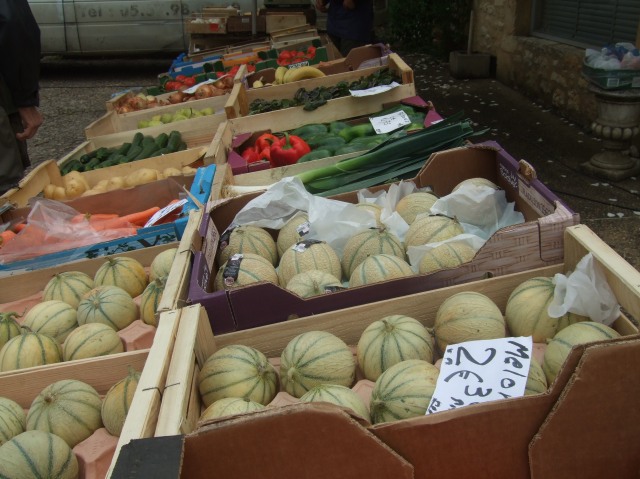 A long row of fruits and vegetables.

One of our specific goals for this morning was to buy two red geraniums for the flower bed in front of our house. As it turned out, there was lots of choice, because the nice young woman who sells flowers and other plants had a good selection. Here’s her collection:

We bought two geranium plants from the flower vendor.

Having bought our plants, it was time to move on. This is the time of year when strawberries are abundant, and the woman who sells them in our market had several varieties on offer. We chose a container of the Mara des bois (the berries you’ll see at the top of the photo below), and thought they were delicious as our dessert after lunch today (with whipped cream, of course). Here’s the vendor making change for a customer: 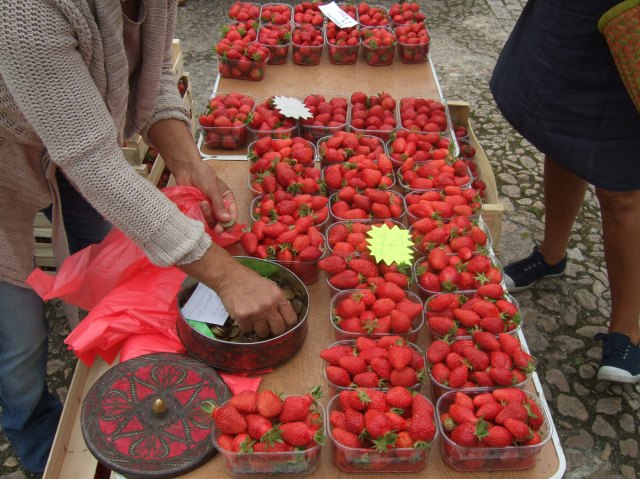 The season for green asparagus is just about over, but the young man selling asparagus still had a few bunches of the green stalks, as well as a good selection of white asparagus, which are graded by the diameter of the stalk. (We wound up buying a bunch of each — with the green asparagus slated to be our vegetable for a lunch during the week, and the white variety to be served as dinner tonight.) Here’s a customer picking up her order:

We bought both kinds — green and white.

With our shopping done, we decided that we’d better hurry up and get some exercise while the rain was holding off. So Jan headed off on a walk, and I hopped on my bike for a short ride. And then — what do you know? — it was time for lunch.