Yesterday was a sports day of sorts in the Greater Daglan Area — at least for some rugged ultramarathoners and a lot of charged-up young rugby players who we watched on and off through the day.

For my wife Jan and me, our contact with the activities started with a trip to Sarlat late in the morning; we were headed to a sports shop, to see about buying a new rowing machine to replace our broken model. But for much of our journey, we had to drive slowly and very carefully in order to dodge a long string of runners, walkers and shufflers, many of them accompanied by friends on bicycles.

They were all taking part in an amazing event that involves distances as long as — wait for it — 100 kilometres. This is an annual event that actually combines two ultramarathons (an “ultramarathon” is any running event longer than the standard marathon distance of 42.2 kilometres). The two runs are the “100 km du Périgord Noir” and the “50 km Belves-Sarlat.” Here’s one of the many signs on the route, this one located just outside the village of La Roque-Gageac:

To the right of the sign, a runner in a yellow vest trudges along the road.

Now I don’t know about you, but both Jan and I think that 100 kilometres is one heck of a long way to run. I have completed one marathon (the full 42.2 kilometres), and that one was enough, thank you very much. Over the years, Jan completed an amazing eight marathons, including the world-famous Boston and London runs. And yet we both kept commenting on how far the runners had to go to complete their journeys, especially for those going the full 100 kilometres.

Ultramarathons are not events for kids, so the youngest runners we saw in action were probably in their 20s. But it seemed like the majority were middle-aged or older, including one guy with long white hair and a flowing white beard that flopped up and down as he ran. Here’s one of the slender female runners, striding along fairly well on Saturday morning: 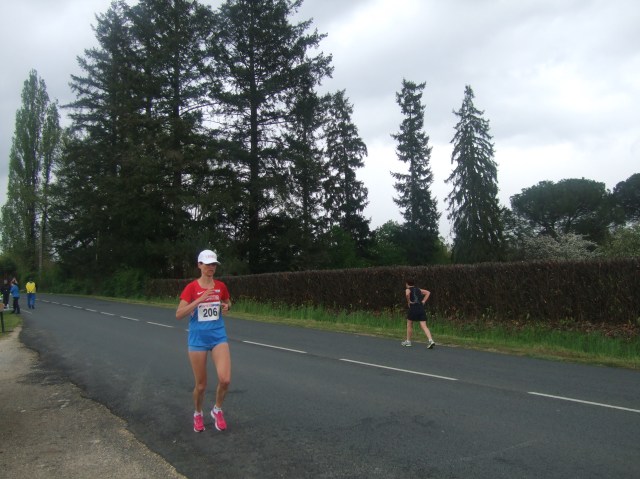 She was making good progress at this point in the late morning.

Here’s a male runner, also moving at a good clip on Saturday morning:

A male runner is striding along well on Saturday morning.

Long-distance runs often bring out a certain goofiness in people; if you’ve ever seen coverage of the London marathon, you’ll have seen people wearing full animal costumes, people running the whole distance backwards, and so on. Yesterday’s race in the Périgord Noir included one chap who was wearing a blonde wig and a white tutu, shown here making a turn at Vitrac Port, headed for Sarlat: 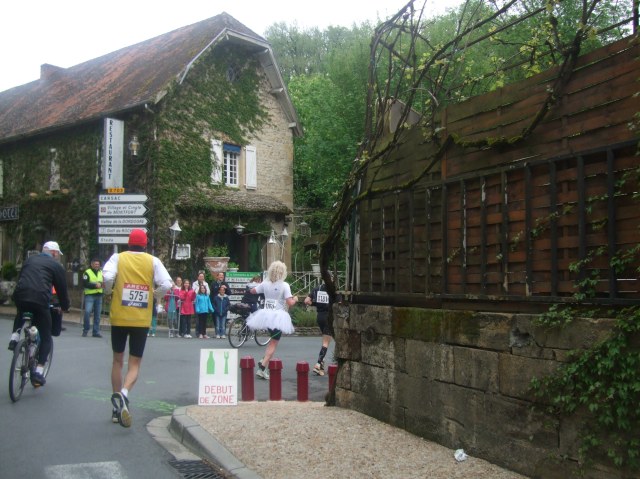 The guy in the blonde wig and the tutu takes a corner.

For a normal marathon, organizers must be sure to supply lots of liquid for the runners, including some energy drinks as well as water; many of the slower runners (who will be on the course for four or more hours) also carry their own food supplies, like energy bars.

But for an ultramarathon — when runners can be out for eight, 10 or 12 hours and even longer — organizers also need to supply munchies to keep the participants going. Here’s one of the tents on the route, staffed by volunteers:

One of several tents to help re-fuel the runners with food and drinks.

Later in the day, Jan and I headed up to the Stade Municipal just north of Daglan, which is the home of the Daglan Rugby Club. Rugby is the sport of southwest France, and Daglan is definitely a rugby village.

Yesterday’s event was a series of games featuring young players. Since the son of one of our friends was to be on the pitch, we wanted to have a look. When we arrived, the game between Cénac (in red) and Le Bugue (in blue) was in full swing, and it really struck us how serious — and tough — some of these young kids were. Here’s a look at the pitch as the teams get set for the ball to be thrown in:

The two rugby teams are getting set for the action.

Here’s another look at the action, as the two teams struggle for control of the ball:

The action heats up, and both teams are in full flight.

And here’s a scrum, late in the game, to get the ball moving in one direction or the other:

A classic rugby scrum starts up the action again.

Finally, this shot shows you just how hard the two teams are fighting for the ball: 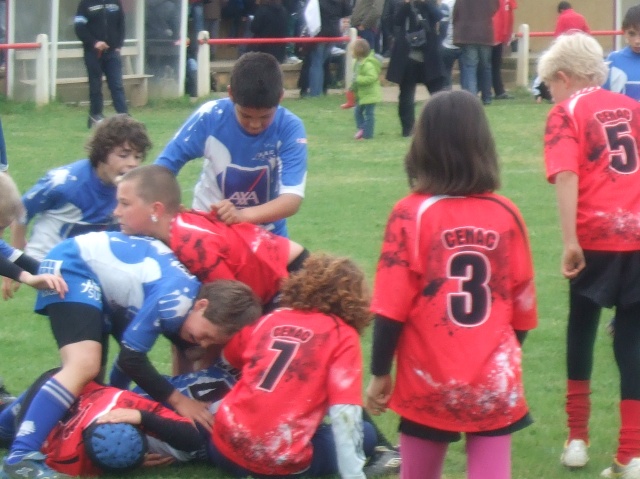 Some serious tussling is going on here.

When it was all over, the team in blue had defeated the Cénac team. Aside from some bruised feelings, we weren’t aware of any serious injuries. Meanwhile, in the ultramarathon, there was a lot of pain going on.

After watching the rugby game, Jan and I headed up through Castelnaud and over to La Roque-Gageac, and at one point passed the sign marking the 70-kilometre mark — with lots of participants still slogging along, mostly shuffling or walking dejectedly, and not looking very happy about the whole thing.  Imagine it:  The time was approaching 5:30 p.m., and yet these runners, who had started early in the morning, still had 30 kilometres to go.

Today I visited the website for the Club Athlètique Belvèsois, the Belvès-based club that sponsors the ultramarathons, and found that the starting time had been 8:00 a.m. on Saturday for the 100-km run and 8:30 a.m. for the 50-km course. And guess what time the organizers were to close the course officially? At 2:00 a.m. today — in other words, 18 hours after the race began. Yikes.