Until today (Friday), our weather has been getting better and better. Now we’re to have a few days of showers, but we’ve certainly enjoyed a few good days this week, with temperatures climbing and the sun shining down.  Yesterday afternoon, for instance, my car’s thermometer read 26.5 Celsius in the shade (that’s almost 80 in American degrees). The warmth and the sunshine allowed for a few seasonal firsts, such as:

Cutting back some plants. Yes, not only have our plants actually been growing, but some have been growing so strongly that they have virtually begged to be cut back. First among equals, of course, were les glycines — the two wisteria vines that are climbing up the front of our house. Here’s a view of them, just before one of the tendrils reached down and tried to yank the camera from my hands:

These wisteria leaves are getting a bit out of control.

The euonymus plants at the side of our house are also growing rapidly, and I’ve already clipped off several small branches from this one, which is now as tall as I am: 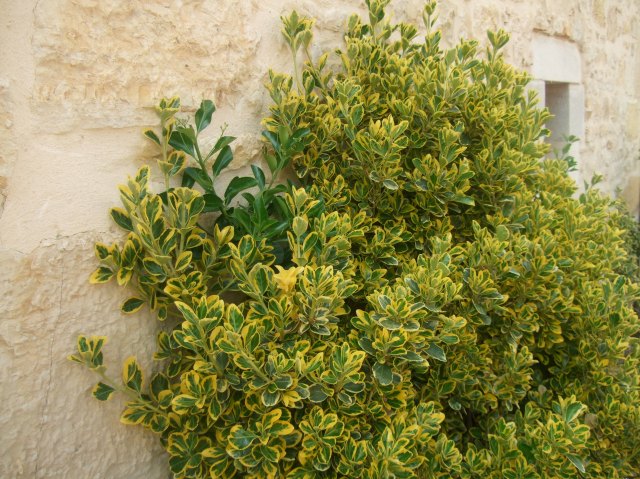 This one just keeps on growing and growing.

Using the barbecue. Yesterday we had the first meal of the year cooked on our charcoal grill, and it made for a very nice lunch. The starting point was a visit to the Fabrice le Chef Boutique in downtown Daglan, where Chef himself trimmed some lovely steaks for my wife Jan. Here they are (the steaks that is, not Fabrice and Jan), coated in olive oil and seasoned with salt and pepper, ready for the grill:

Ready for the grill, with olive oil, salt and pepper.

Mere moments later, the steaks were on the grill, under my watchful eye. I gave them four minutes per side, and then brought them into the house. 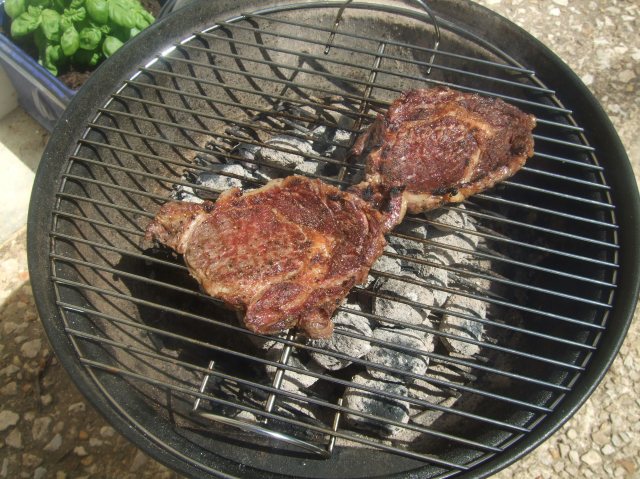 The two steaks lasted just eight minutes over the charcoal.

And here they are, resting. We let the steaks rest for just a few minutes before tucking in, and loved them — they were juicy, tender, delicious. “I know what we’ll be eating at least once a week all summer!” Jan exclaimed.

A nice little rest helps the steaks get juicier.

Riding our bikes. Thursday morning, as I was finishing up some business writing, Jan went out for a bike ride and reported that she enjoyed it tremendously. So yesterday afternoon, my work nicely completed, I did the same. The ride was lovely, and I enjoyed the scenery as I cycled from Daglan up to St. Cybranet and then on to Castelnaud, where I stopped at La Plage for an espresso and a Perrier.

Now you can enjoy some of the trip with me, first stopping to see a lilac growing against an old stone house:

This lilac was growing in the village of St. Cybranet.

And here’s the River Céou — which I often call the Mighty Céou, for reasons more poetic than factual — as seen from the bridge in St. Cybranet:

View from the bridge.

Finally, here’s a stone wall of flowers on a stretch of the bike path just as it leaves St. Cybranet and heads up to Castelnaud:

A lovely wall of flowers in the afternoon April sunshine.

This morning’s adventures included a routine visit to my doctor (my blood presssure, in case you’re wondering, is “parfait“) and then a shopping trip to Sarlat. There we stopped at a café for some coffees, and were surprised to find that the man behind the bar was a jolly guy who was friendly with us when he was the lead waiter at Le Petit Paris in Daglan. I guess that the tips we left in the restaurant the past paid off, because we got our coffees for free. A vigorous round of handshakes followed. How civilized!