The last time I wrote about duck confit, or confit de canard, one of my readers thanked me for pointing out that the duck leg should be finished in a hot oven to brown it and make the skin crispy. He had always tried to prepare the duck in a skillet, and wound up with uneven browning and even some burned bits. (For the full story, see “The best duck confit so far,” posted on August 25, 2012.) Now I have a new tip.

Knowing that my wife Jan would be driving to the weekly Cénac market this morning for some shopping, I suggested that she visit the duck-and-goose stall and buy a couple of legs of duck confit for today’s lunch. By the time she returned, I had hatched a new plan.

“Instead of starting off the legs in a skillet, to start warming the meat and melting off some of the fat,” I said, “why don’t we just put the legs in a dish and nuke them for a while in the microwave? Then we can finish them in the oven as usual.” She thought that was worth trying, and so she did.

It took only a few minutes in the microwave for the two legs to lose a significant amount of fat, and to start getting hot. Jan then transferred them into a foil-lined pan, and put them in a pre-heated 200-degree-Celsius oven (about 400 degrees American) for a half hour, until they were golden brown.

Now you may be wondering about the point of using the microwave instead of a pan. Well, for one thing, it’s a bit faster. More importantly, it’s a lot cleaner, since our kitchen didn’t get filled with the smoke and the smell that pour off the duck legs when they’re in the skillet.

And the result? Very nice, as you can see from this photo of my lunch plate today — with the duck accompanied by some mashed potatoes and a mix of sautéed vegetables. 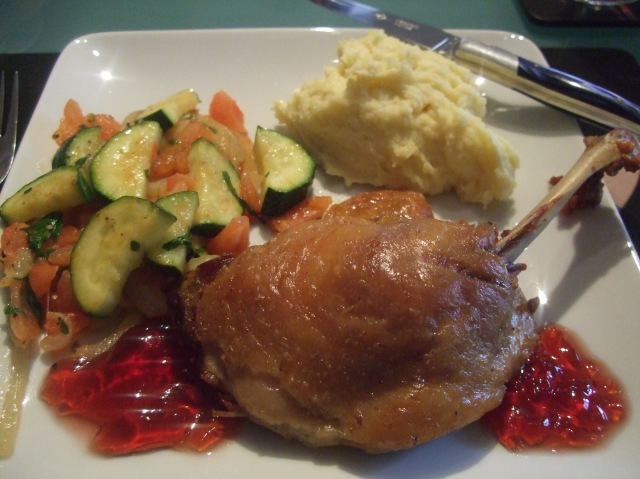 Crispy duck, with some red currant jelly on the side.

My only suggestion for the next time is that we should increase the oven temperature a bit, to 225 Celsius or so, to make the duck skin even more crispy, while keeping the meat moist  and delicious.

1 Response to The duck confit express