Nice twists on some yummy classics

Our lunch yesterday with friends Rob and Darlene, who are visiting from Toronto, and Rob’s aunt and uncle from the Bergerac area, was a hit. As expected.

We met up in Beynac, at La Petite Tonnelle. It’s just a few hundred meters up from the main road that runs through Beynac,  along the Dordogne River. The road where the restaurant sits runs right up the hill, curving and switching until it finally reaches the foreboding château once owned by Richard the Lionheart. But there’s nothing foreboding about La Petite Tonnelle.

It’s a Greater Daglan Area favourite for several reasons. For one thing, it’s nearly always open — unlike so many restaurants that close for a good chunk of the winter season. Second, it’s charming and intimate, whether you sit outside on its terrace or inside near the wall of solid rock that forms part of the building. And finally, the meals are not only quite good but often have a nice twist, like Moroccan seasonings or an unusual constructions of foods.

Yesterday, for example, both Rob and I ordered the veal stew as our plats principaux, and thought it was delicious. But what really surprised me were the crispy sticks of polenta that had been mixed with tiny pieces of hazelnut — delicious. Here’s the dish:

The stew was delicious, but I loved the polenta more!

Walnut cake is a standard here in the Périgord Noir area of the Dordogne, where walnuts are a major crop. I like almost every walnut cake I’ve ever eaten here, but sometimes they can be a touch dry. But not the cake at La Petite Tonnelle.

It’s moist, spicy, and full of fruits as well as walnuts. It’s easily my favourite version of the cake in the GDA. Here it is: 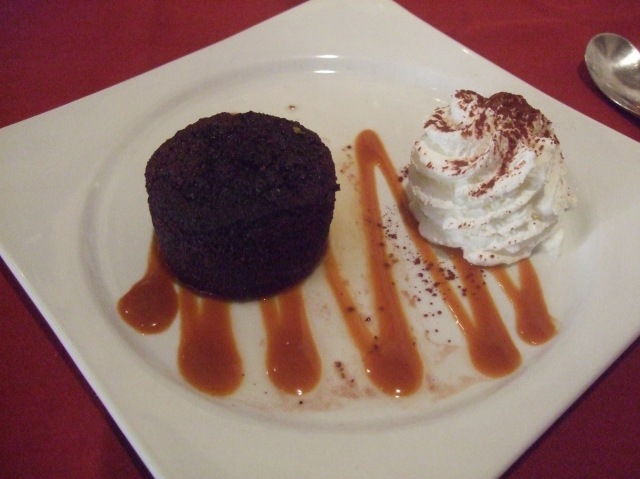 As for the dessert that Darlene and Rob chose, it went immediately on to my list of the next thing to try at La Petite Tonnelle. From the crunchy bottom, up through the chestnut mousse, the cream topping, and then the chocolate tuiles made with bits of walnut, it was a major hit. Have a look:

Layer upon layer of sweet goodness.

After all this feasting, we could only manage bacon-and-croissant sandwiches at about 10 p.m. last night. Then a large serving of kedgeree for breakfast this morning. And now we’re just about to leave for lunch with English friends (plus Darlene and Rob) at a Michelin-starred restaurant in Trémolat.

So, no, you don’t have to worry about us going hungry.

4 Responses to Nice twists on some yummy classics