Superb isn’t a word I use all that often. But yesterday at lunch, I wrote “superb” on my little pad of paper as I made notes about our lunch at La Table du Marché in old Bergerac, about an hour west of Daglan.

We had driven to Bergerac with good friends from Toronto, Rob and Darlene, to meet up with one of Rob’s cousins, and her boyfriend, so there were six of us for lunch.  La Table du Marché is a relatively small restaurant, just across the street from the covered market (hence the marché) in the centre of vieux Bergerac. The style is contemporary, but comfortable. The chef and owner is a Parisian, Stéphane Cuzin, who learned his craft at starred restaurants in France and Belgium — and learned it very well. His food is clever, creative, fresh, and delicious.

All six of us decided to have a three-course lunch, and most of us chose to have the Chef-recommended glass of wine with each course. But while finishing off our kirs and waiting for our entrées, we were each served an unusual and refreshing amuse bouche. Here it is: a small bowl containing a delicious mousse of rosy shrimp, topped with a small ball of arugula (rocket) ice cream, and then sprinkled with black sesame seeds: 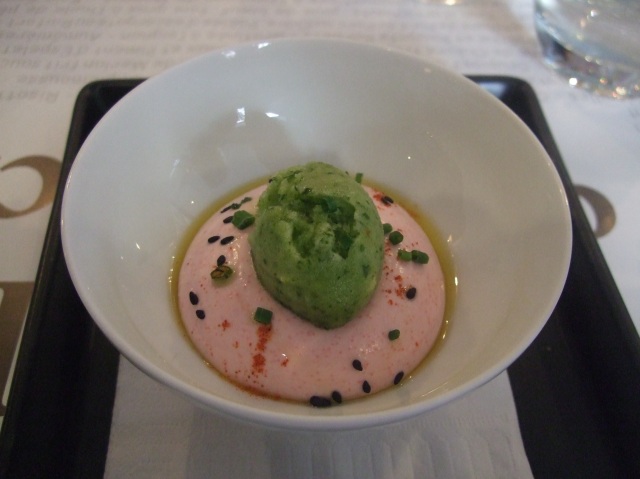 A taste explosion to start off our meal.

The choice of entrées was equally unusual. For example, Jan and I started with lotte (monkfish) that had been sliced paper-thin, and then marinated in lime juice. It was served with, among other things, fresh pea shoots, pomegranate seeds, small dollops of a creamy cheese, and tiny slivers of black olives. The flavours were intense and, again, refreshing. Here’s my plate:

For her entrée, Darlene chose what the menu described as Cannelloni Pomme Céleri Boudin Noir de J. Bertin, along with Crème de Pain Doré, Jeunes Pousses — in other words, a complex dish including black pudding, cannelloni, various vegetables, a rich sauce, and a sprinkling of pea shoots and pomegranate seeds. Feast your eyes:

The entrée ordered by Darlene.

If everything about my meal ranged from very good to wonderful, it was my main course, or plat principal, that I thought was superb. It was a simple piece of shoulder of lamb that had been cooked until it was amazingly tender, served with “harissa de carrote,” a delicious sauce, and sprinklings of peas and slivers of black olive. Absolutely delicious.

This was really a superb dish of lamb shoulder.

With each course, Chef suggests a glass of a wine that he believes will be appropriate for that dish, and my glass of red wine with the lamb seemed just about perfect. It was a 2011 Louis Cheze Ro-Rée Saint-Joseph, a Rhône Valley wine from eastern France that’s 100% Syrah.

Desserts at La Table du Marché are as inventive as the main dishes. For example, here’s Jan’s Javanaise of exotic fruit and pineapple sorbet, which came with its own small glass vial of a liquid that turned out to be rum.

A vial of rum was served with Jan’s dessert.

And here it is once I broke into the cake, releasing the fondant centre (in French, fondant simply means “melting”): 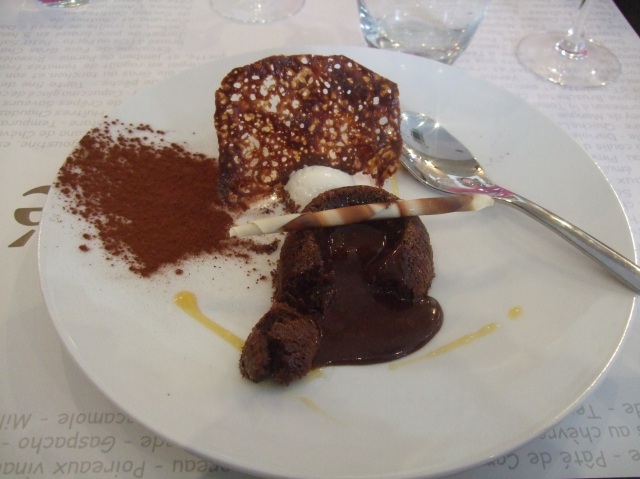 A puddle of warm chocolate runs out from the cake.

For her dessert, Darlene chose a café gourmand, that clever combination of a cup of coffee with a sampling of sweets. Her serving turned out to be so generous that Rob and I had to relieve her of some of the burden of eating everything. Here it is:

A serving tray of coffee and desserts — café gourmand.

Next steps? Well, we’re thinking of taking a cooking class at La Table du Marché later this month, along with Rob’s cousin, who lives not far from Bergerac. And as for today, we’re to have lunch with friends Suzanne and Mark, at the Basque restaurant in Castelnaud, about 10 kilometres north of Daglan. Yes, the festival of feasting continues.