Progress report on that “shut down” French village

Most of today was pretty miserable — cold and grey, although without any of the snow that’s been blanketing northern France. By the late afternoon, however, the sun was out, everything was looking better, and it was time for us to take a little drive.

So off we went to La Roque-Gageac, to see what progress has been made on widening the road that lies between the Dordogne River and the village’s storefronts. I wrote about the project on January 20, in a post called “Shutting down a French village.”

Here’s how the roadwork looked back then, in a photo taken from the southern edge of the village: 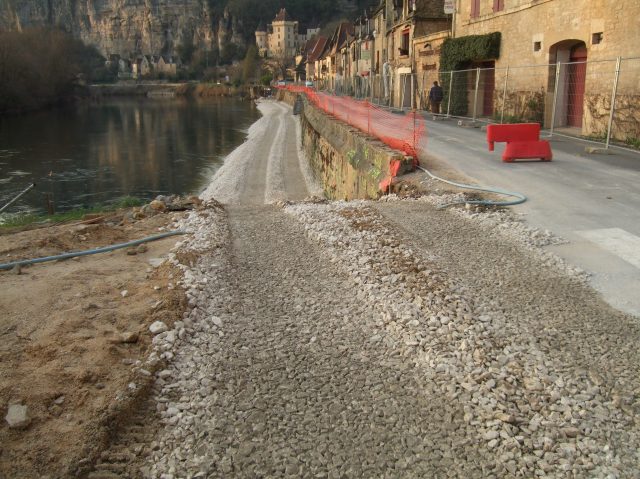 Stone is being put down between the road and the river.

And here’s how the work looked this afternoon, in a photo taken from the other edge — the northern end — of La Roque:

It’s all starting to take shape — but there’s lots more to do.

As you can see, the pilings are in place, but there’s lots of fill to be added, even before the final touches are put down. So don’t be planning to drive through this pretty village any time soon.

This entry was posted in Life in southwest France, Travels in and out of France, Weather in the Dordogne and tagged cold weather, Daglan, dordogne river, Dordogne weather, La Roque-Gageac, roadwork in La Roque-Gageac, weather. Bookmark the permalink.